By Steve McCann
America's economy faces a miserable future, according to an important government report. The media collectively have yawned, and official Washington has barely blinked. The Government Accountability Office recently issued its report to the Congress on the long-term fiscal outlook for the United States.   It is a bleak picture.  The report opens:

Weakness in the economy and financial markets -- and the government's response to them -- have contributed to near-term increases in federal deficits, which reached record level in fiscal year 2009.  While a lot of attention has been given to the recent fiscal deterioration, the federal government faces even larger fiscal challenges that will persist long after the return of financial stability and economic growth.

...the federal government is on an unsustainable fiscal path.

The borrowing begins to spiral out of control in order to meet the spending requirement which in turn increases interest costs until the entire house of cards collapses under its own weight.
In the case of the family example used above, bankruptcy is the inevitable result of this uncontrolled spending and borrowing.   For a country the options are not so clear cut.
It has been generally accepted that a country's economy is a good credit risk as long as its debt remains in the 50% range of that nation's annual Gross Domestic Product.  Per the GAO the prospects for the United States are as follows:
Debt Held by the Public as a Per Cent of GDP 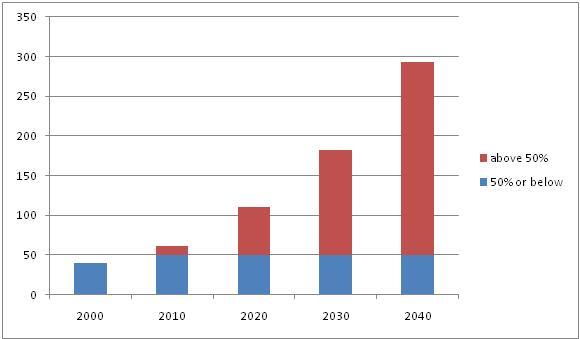 There are three options a country has to avoid complete economic collapse:  1) raise taxes, 2) cut spending and 3) inflate the value of the currency.
Per the GAO: revenue would have to be increased by 47% and noninterest spending cut by 33% or a combination of the two over the next 75 years to keep debt at the same level as the end of 2008 (40.8% of GDP).  Waiting another ten years to address this issue would require a revenue increase of 58% and noninterest spending cuts of 39% or a combination of the two.
Yet the Congress is discussing a Health Care Reform bill that could add over 5 Trillion dollars in new spending over the next 30 years and a Carbon Cap and Tax bill which will hamstring the economy and reduce potential and much needed growth in revenue.  The only way for the government to increase revenue is for the economy to expand.
(It should be noted the impact of the various Health Care Reform bills in Congress were not included in the GAO study)
The option of hyper-inflating the currency, while having the effect of paying off the debt with near worthless dollars, will destroy the country's economy and relegate the nation to a "banana republic' status unable to compete in the world economy.
Nothing lays out the future better than this GAO report.   The alarm has been sounded.  Those in the Congress who will not pay heed must be replaced.  Do not leave a shell of a once magnificent country to your children and grandchildren.
|