I usually see about twenty patients in my office, and at least a few patients in the hospital, daily. Over the past several months, my patient load has increased by one third. Almost all of the increase is due to fears about H1N1 influenza.

Patients are coming to the office fearful of "Swine Flu," with symptoms ranging from a slight sniffle to overt pneumonia. After seeing hundreds of cases of "flu" over the past several months and testing all of those who fit the clinical picture of influenza, I have confirmed only three genuine cases of H1N1. Two of these cases were in physicians and one was in a nurse.
All of the other cases turned out to be allergies, typical viral or bacterial infections, or the seasonal flu. Additionally, all three had mild illness and recovered with symptomatic treatment. The graph below shows the percentage of visits for influenza-like illness reported by the U.S. Outpatient Influenza-like Illness Surveillance Network for the week ending October 17, 2009. Note the much higher percentage of visits for flu-like illnesses this year. (Fig 1) 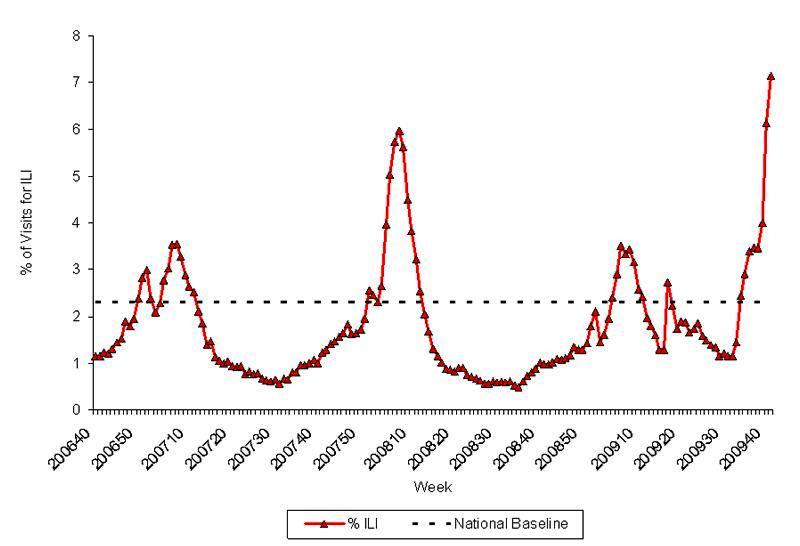 This graph reflects the anxiety that has been caused, not an increased rate of disease, but the title of the original article is still appropriate. It is necessary to keep this "pandemic" in perspective. We have an administration that will try to divert attention away from other issues and a public health system that is more than willing to help them.
In May of this year I wrote an article entitled "Swine Flu in Perspective." In it I noted the following:

Finally, 36,000 people die from Influenza every year in this country. That's 100 people a day on average!  Sadly, a baby from Mexico died in Texas from the Swine Flu. There will likely be more deaths here, but not in the numbers some would have you believe. However, about 100 people in the US die from the typical flu every day. Swine flu is a flu! Of course, every life is precious. But more Americans die from car accidents than the flu. Do we need to be vigilant? Of course. Should we foment panic? Absolutely not.

I cautioned that more people would likely die but held strongly to the belief that the panic was more dangerous than the disease. Now, five months later, after reviewing the evidence, I have not changed my mind.
So let's review the data. The CDC (Centers for Disease Control) report on the leading causes of death for 2006, the last year for which complete statistics are available, can be found here. Note that there were 56,326 deaths caused by "influenza and pneumonia." Why are these combined? Simply because while we have a pretty good idea of the number of people who died of pneumonia, we have to estimate the number of deaths for which influenza was a contributing factor. The way in which the CDC does this can be found here. A relatively small number of people are tested for seasonal influenza relative to the number who present with respiratory infections. Furthermore, only about 38% of hospitalized patients with flu-like syndrome are tested for seasonal influenza and, surprisingly, only 5% who die from such illnesses are tested.
Out of a total of 273 cities with populations of over 100,000, and hundreds more with populations over 10,000, the CDC monitors seasonal influenza mortality statistics from just 122 cities. Don't get me wrong; the CDC does a good job, but by its very nature and magnitude it is an incomplete job. Though seasonal influenza may cause a higher proportion of deaths than reported, it is estimated that it causes around 36,000 deaths annually.
What is happening with H1N1? For starters, as mentioned above, people are seeking medical intervention much more quickly and often for symptoms they would have ignored or treated at home with chicken soup and Tylenol in years past. Additionally, proportionately larger numbers of people were initially getting tested, even when they had only the remotest possibility of having the disease. The fact that more people were tested meant that more would be diagnosed.
Additionally, and even more disturbing, many cases are assumed to be H1N1 without testing. Yes, the CDC advised the states to stop testing for and tracking cases of H1N1. Their rationale? There is no need to waste resources when the government has already confirmed there is an epidemic. In other words, just trust us. The debate is over. I had no idea Al Gore and the IPCC were working for the CDC. As I originally contended, the number of cases of H1N1 has been overestimated, and even CBS News reported this.
I have had twenty-two patients call me or come in to the office claiming to have had contact with patients who were diagnosed with the "Swine Flu." In each and every case I took the time to investigate the contact case to determine whether the patient had actually been tested. In every case so far, the contact case either was not tested or tested negative but was given the diagnosis just the same.
On a personal note, my daughter developed a viral illness but continued running cross country while sick. She fainted due to dehydration and was admitted to the hospital with a diagnosis of H1N1. She was discharged after three days and is doing well. Her roommates were temporarily moved out of her dorm room to prevent exposure. I checked on the test several days later, and despite the diagnosis, it was negative.
Yet even news organizations overseas are reporting on "Swine Flu" mania in the U.S. and our valiant president's decisive actions to protect us. Of course, the BBC has not discussed his delay on a decision for troop escalation in Afghanistan. Over 1,000 deaths from "Swine Flu" thus far in 2009 have been reported in the U.S., and Mr. Obama has declared a "Swine Flu emergency." Of course, statistics reveal that around 30,000 people have died from the seasonal flu this year and he has declared no "seasonal flu emergency." With over 1,384 Coalition deaths since 2001, I for one would like to see him declare an "Afghanistan Emergency" and prescribe more troops to protect the brave souls in mortal danger there.
Generally, the reaction to this pandemic borders on the Orwellian. Many employers are forcing employees to be vaccinated under threat of loss of their jobs. Hospitals are doing the same, and many are requiring caregivers to wear masks at all times, even if there have been no reported cases. Some schools are considering requiring immunization under threat of suspension.
Evidence is mounting that, as I opined previously, "Swine Flu" is less of a threat medically and epidemiologically than was feared, but is a great mechanism for the promotion of political pork. Our founding fathers taught that it is healthy to regard government intentions with skepticism. We have failed to heed their wise advice, and we are now learning that the military tactic of deception is alive and well in the Obama Administration. While we are being threatened by H1N1, they are using the distraction to infect us with a much more deadly disease that will affect not only us, but our children and grandchildren: the disease of subjugation.
Frank S. Rosenbloom, M.D. is president of Oregon Right to Life. His website is frankrosenbloom.com. His book "Lethal Prescription" will be available on November 25th, 2009.
|