Warning: mysqli_free_result() expects parameter 1 to be mysqli_result, bool given in /var/www/html/americanthinker/admin/common/functions/func.general.php on line 126
 Not Ashamed to Love My Country - American Thinker
|

Not Ashamed to Love My Country

By Lloyd Marcus
For several years, I sang my original, "Celebrate America" at monthly U.S. Immigration Citizenship Ceremonies in Maryland. I took great pride in the knowledge that mine was the first song the approximate one thousand applicants heard as new American citizens after taking their long dreamed of oath of allegiance. Each ceremony was an emotional event of great celebration.
It was not unusual to see very old applicants in wheel chairs proudly and tearfully taking the oath, their raised right hand supported by a grandchild, son or daughter. Obviously, becoming an American was a great honor to them. Unfortunately, such love and passion for our country seems the stuff of days gone by. To many, it is considered hokey, redneck, un-global minded (gag me) and even offensive to love your country. It simply isn't sophisticated to be waving the flag all over the place. We patriots are those simple minded folks who "cling to God and guns" as Obama described us during his presidential campaign. 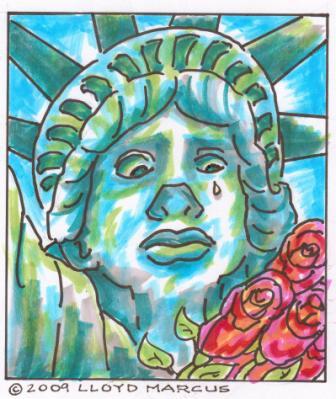 Liberalism has contributed greatly to the decline of patriotism. The hostile takeover of our schools by Liberalism has indoctrinated many of our kids to hate their country. They are encouraged to sing the praises of Barack Hussein Obama, but not of God and country.
Years ago, a dear white friend told me her son, who was in middle school, came home in tears feeling guilty for the horrible things his white ancestors and our founding fathers did to "Native Americans." This poor kid was taught a laundry list of evils perpetuated by his race and America. Today, my friend's son is a 22-year-old Marxist who passionately hates Capitalism and America. Thank you, public school system.
The Tea Party Movement has sparked a resurgence of patriotism. The movement itself was birthed out of fear of the far left agenda and radical changes being implemented by the Obama administration. Despite attempts by the liberal media and the Obama gang to convince us otherwise, we see and feel the threat of destruction of the traditions, values and institutions which we hold dear and have made America great.
The realization of Obama's threat to our country is a blessing. Many of us have taken America, our Great Lady, for granted far too long, never telling her how pretty she is, how much we love her or how much we appreciate everything she does for us. And when is the last time you gave America flowers? America, we love you and don't want to lose you.
In response to my article proclaiming that I am an American rather than a hyphenated African American, I received the following letter. Talk about having "the right stuff," the author and his dad are great Americans. This letter reflects the kind of patriotism I long to see again on a massive scale.

"Letter from an Unhyphenated American‏. Sir, I very much enjoy your articles in American Thinker and I can relate to the unhyphenated American moniker.  My father is a Holocaust survivor, a Catholic from Poland.  He escaped to this country, joined the U.S. Navy and earned his citizenship.  As a first-generation American, I can tell you that I cannot speak Polish... my father insisted that we learn only English because America saved him from the Nazis and the Soviets.  He married a Californian of Irish and Mexican decent and served in the Navy and the Navy Reserves for over 30 years.  I am now into my 16th year in the United States Air Force.

I appreciate your story of overcoming adversity and your unabashed love of this country.  I just wanted to drop a line of encouragement for your activities in the Tea Party movement, and urge you to continue to be a voice of common sense and reason in these uncertain times."

Major (Though he signed his full name, I respect his privacy) U.S. Air Force

Folks, you can feel the gratitude, love and respect these men have for their country. The father in this letter "gets it." He knows what it means to live under tyranny, and appreciates the great and rare wonderful gift we enjoy as Americans called freedom. He epitomizes the type of immigrant Lady Liberty and the American people embraces with open arms. He feels as the lyric in Lee Greenwood's classic song, "...proud to be an American."

Sunday I begin traveling across America on the Tea Party Express II Tour. While these rallies are where we encourage patriots to stay strong and work to restore our freedom, liberty and culture, they are love letters and flowers to America. The rallies are also a continuation of my Million Hand Shake March.