By Steve McCann
Few things cause the eye to glaze over more than economic statistics, particularly when discussing all but incomprehensible sums in the billions and trillions of dollars.  There are two statistics which the public should be aware of more than others; they are
1) Gross Domestic Product (total economic output of the country); and
2) The Net Gross Domestic Product per Person (The GDP less the amount of government spending at all levels divided by the total population).
The Net GDP per person recognizes the impact of federal, state and local spending on the economy.
Ideally the net amount each citizen realizes of the GDP should increase every year adjusted for inflation.  That is an indicator of private wealth creation, higher personal incomes and a healthy economy.  Despite minor ups and downs the overall trend in an eight year period should always be on the positive side and normally has been over the past twenty-five years.
However, in reviewing the actual and projected GDP data by the Congressional Budget Office,  combined with the actual and projected spending by the Federal, State and local governments for the period 2009 to 2014 shows negative private wealth growth due to dramatic increases in government spending.  The Net GDP per Person is predicted to be below calendar year 2000 for this 6 year period (2014 last available spending projection).   It is safe to assume, however, if spending is not dramatically reined in and if higher taxes do not further damage the economy, this trend will continue for many years to come beyond 2014.
Since these are projections of population growth, the Gross Domestic Product and overall government spending, the numbers are subject to change.  Historically the CBO and other government agencies tend to overestimate economic growth and underestimate spending and inflation.
For example, the CBO predicts an average GDP growth rate of 4.4% and an average unemployment rate of 6.8% for the years 2010 to 2014.  However a consensus of private economists  reveals an estimate of average GDP growth at 3.0% (2010 to 2014) and an unemployment rate in the double digit range through at least 2012.  With the pending heath care and other new spending   legislation in Congress, no can begin to accurately predict future government spending.
The following chart shows the Net GDP per Person adjusted for inflation (calendar year 2000 as the base) for the period 2000 to 2014.
Blue Line---Government actual and projections      Red Line---Consensus private economists 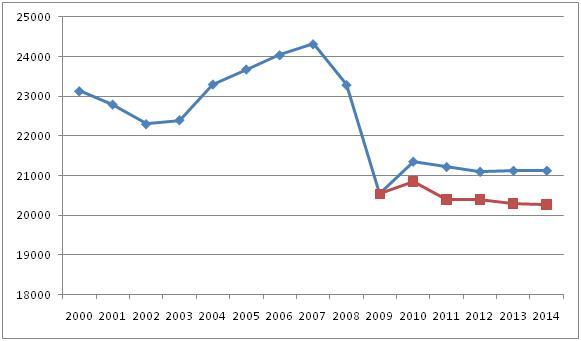 During the Bush presidency the country went through a recession and the devastating economic impact of 9/11 in 2001.  Yet, due pro-growth policies, the inflation adjusted Net GDP per Person showed overall growth during President Bush's time in office.
The apologists for the Obama Administration may try to say they are simply trying to work their way out of the economic debacle left to them by the Bush Administration; however, the government's own optimistic projections show their efforts will not work even over a six year period.
They may also attempt to argue that the higher government spending is in reality a redistribution of wealth.  That wealth must first be taken from the American people by way of taxes or borrowing, thus reducing the amount of capital available for business expansion and job creation as well as money to sustain retail spending.
The end product of the redistributive argument can be seen in the economic stagnation of the countries of Western Europe.  The main reason these economies have not deteriorated further is due to the declining rate of replacement population growth.
The United States will experience a population growth of nearly 11 million people over the next five years.  Per the Bureau of Labor Statistics, the labor force will increase over 5.2 million during this same period requiring the economy to produce sufficient jobs for the new workers and recover the 7 million jobs lost since 2008.
This cannot be done if the economy is weighed down with the shackles of government spending and intrusion at the federal, state and local levels.
The country will never see the net GDP per person experienced in 2000 if policies such as Health Care Reform and Cap and Trade are enacted, taxes raised dramatically and nearly trillion dollar annual deficits are experienced for the next ten years.
For the first time in our history future generations will be worse off than the present ones.  The Bush presidency could mark the peak of economic growth and prosperity in the 21st century.
This can be reversed, but it can only happen if the voting public becomes more aware of the current and prospective situation.  With that awareness become more engaged in the political process, stop being single issue voters and falling prey to the maxim that there is no difference between Republicans and Democrats.  Those current elected Republicans who fail to address the future of our country should be challenged in primaries.
There is not the time for third parties to ascend to power sufficient to change the course we are on.  The next election cycle in 2010 may be the most important off-year election in our history.  Time is something we, as a nation, have little of.
|