Warning: mysqli_free_result() expects parameter 1 to be mysqli_result, bool given in /var/www/html/americanthinker/admin/common/functions/func.general.php on line 126
 How to take down a great power - American Thinker
|

How to take down a great power

Unlike Augustus or Caligula, Lucius Aurelius Commodus was not an emperor who made a strong impression on modern consciousness. Until the release of the film Gladiator, a heavily fictionalized version of his reign, most Americans had never heard of him. In the film he comes across as quite a compelling figure thanks to a first-rate portrayal by Joaquin Phoenix.

But, as is true of much of the film, the character of Commodus was altered for dramatic purposes. Unlike Caligula and Nero, Commodus was not a psychopath. Though he killed plenty (12,000 by his own reckoning), he was no thrill-killer as such, but very likely what we today would call a malignant narcissist, somebody who believes himself to be the center of the universe and everyone else merely a walk-on. Combine this personality disorder with the power imbued in a national leader and you've set the fuse blazing for sure.
Commodus was not actually in conflict with his father, Marcus Aurelius, last of the four great emperors. Far from it -- Marcus Aurelius idolized his son, steadily raising him through the imperial ranks to the level of co-emperor. Blinded by paternal affection, Aurelius unleashed a monster on Rome, proving that not even a man trained to the highest levels of philosophy (Aurelius was also a leading Stoic philosopher) is immune to human error.
Commodus' failings became evident soon after he ascended to the imperial purple. Having no background in foreign policy, he effectively set it aside, allowing his father's achievements to unravel. Marcus Aurelius had spent much of his reign on the Danubean frontier, subduing menacing barbarian tribes threatening the peace of the ancient world. Commodus simply abandoned the province. If the Romans had possessed Special Forces and remote-controlled drones, things might have turned out differently.
The same was true at home. Commodus allowed important policy decisions to fall into the hands of underlings, providing little in the way of guidance. Chief among these was Tigiduis Perrenis, a corrupt prefect whom today we'd call chief of staff. Commodus did nothing to control Perrenis or end his corrupt practices. Eventually the prefect was caught in a conspiracy against the throne and executed. But Commodus repeated his mistake, promoting yet another corrupt official. The same was true on all levels of government. It was as if Commodus had no competent, honest individuals to choose from.
But the emperor's most serious problems were personal. Commodus was an egomaniac of a type difficult for a normal person to understand.  No matter what the situation, Commodus came first. All honors, awards, and decorations were reserved for the emperor. It made no difference whether he'd earned them or not. Religious, political, military -- all went to Commodus. If the Nobel had been awarded in Rome, he'd have gotten the Nobel.
Roman emperors had long been raised to divine status on their deaths  (V 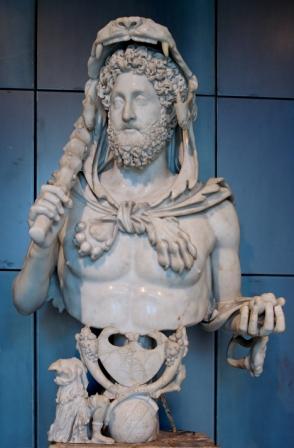 espasian mocked this practice on his deathbed), but Commodus didn't want to wait. He began demanding the obeisance due to a god, specifically adapting the persona of Hercules.  He took to wearing a leopard skin as he walked the streets of Rome. Going a step further, he attempted to outdo the mythical exploits of Hercules by appearing in the Coliseum to slaughter masses of animals and gladiators. The wild beasts were tethered, and the fighters equipped with wooden swords, but that didn't matter to Commodus, by this time utterly lost in his private dream world.
It became dangerous to outdo Commodus in any athletic or gladiatorial endeavor. When noted champion Julius Alexander killed a lion by spear while on horseback, a stunt Commodus had not mastered, the emperor ordered him executed.
Such excesses created their own reaction. Commodus was plagued with plots to overthrow him. The first was masterminded by his sister Annia Lucilla, whom he had strangled while in exile. A decade later his favorite concubine Marcia (talk about bad luck with your female relations) kicked off another plot featuring an attempt at poison which Commodus threw up. Not to be denied, the conspirators arranged for the wrestler Narcissus to strangle Commodus in his bedroom, the same treatment he had meted out to his sister.
Whatever the conspirators were hoping, Rome itself was by then inevitably in decline. Within a short time the Severans, a dynasty of full-fledged military dictators, were in control. Rome's golden age was ended, and there was no going back.
We look back at the Roman epoch with a sense of relief. We've learned so much since then. No longer do we consider our leaders to be gods among men. No longer do we hand them unearned and meretricious awards and prizes. We don't turn on and destroy members of previous administrations. We don't tolerate incompetent and corrupt sycophants in high office. We've learned to recognize disorders such as pathological narcissism and assure that the victims do not gain high office. Any president who placed his prestige on the line with an athletic contest would be laughed to scorn.
And as for political bloodshed, that kind of savagery has no place in a modern democracy. Any party that called for the assassination of an opposing leader -- say, George W. Bush -- would simply be run out of the public sphere. Unlike the Romans, we all understand the concept of consequences, that what goes around comes around. Don't we?
|