Warning: mysqli_free_result() expects parameter 1 to be mysqli_result, bool given in /var/www/html/americanthinker/admin/common/functions/func.general.php on line 126
 Hit and Run - American Thinker
|

By Randy Fardal
Like the lone highway patrolman sweeping up broken glass after the TV news trucks have left the accident scene, the nation's auto-recyclers continue to clean up the mess from last summer's Cash for Clunkers program. Some recyclers still need months to strip thousands of clunkers before they send the last of the steel carcasses to the crusher.
Other than the recycling story, there has been little journalistic follow-up of Cash for Clunkers (C4C). The business media has written about the economic lunacy of the C4C program, but the Obama media seems suspiciously quiet about its final results.
For instance, C4C was Lefty economist Alan Blinder's pet project. Why isn't he all over CNN and MSNBC, taking credit for the idea and demanding more funding?
So, like that highway patrolman on a lonely road, the new media is left to file the economic accident report. Let's start where the Obama media stopped reporting: the end of the C4C program.
Just after the program was shut down, a popular story headline on August 26 was "Cash for Clunkers Generates 700,000 New Car Sales." A quick internet search shows that exact phrase in about 11,000 news stories and blogs. At the time, it seemed remarkable because US monthly sales of cars and light trucks had been running at about 800,000 (seasonally adjusted).
Chart 1 shows monthly US sales of light vehicles (cars and light trucks) since October 2007, based on data from Motor Intelligence. The solid gold line shows the actual results through June, and the red line shows the impressive jump in July and August, when C4C was active. 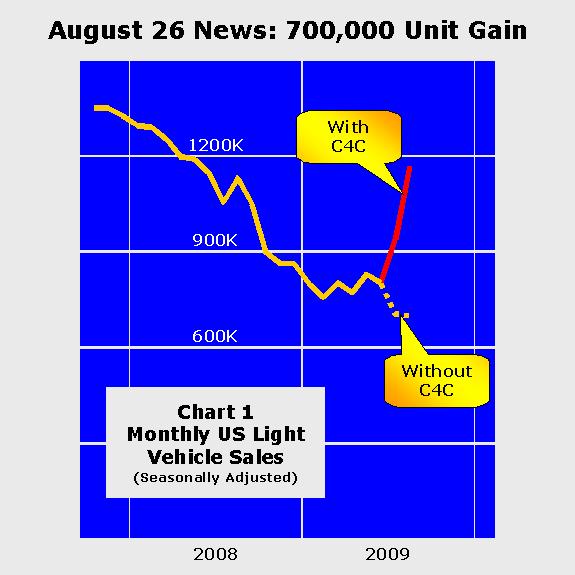 If they thought about it at all, the Obama media journalists apparently wanted their audiences to believe C4C generated sales of 700,000 additional vehicles. Since the first billion dollars of the three-billion-dollar program was used in July, some journalists might have added that without C4C, sales would have been about 233,000 units lower in July and 467,000 units lower in August, as shown by the dashed gold line in Chart 1.
But two weeks later, the president's Council of Economic Advisors issued a report stating that the actual number of vehicle sales generated by the C4C program was about 330,000.  The report concluded that about 200,000 clunkers would have been traded anyway, and another 160,000 units were shifted from June, September, October, November, and December sales.
That means taxpayers actually are on the hook for about $9,000 per incremental sale. The Obama media ignored that bad news, leaving its audiences with the false impression from earlier reports that C4C led to incremental sales of 700,000 units, even after it had been refuted by the administration.
At the end of September, the month's vehicle sales figures came in below those of both May and June. That news did get some Obama media coverage, but little economic analysis. The actual results are shown in Chart 2 in red.  The dashed gold line shows the CEA estimates of what would have happened without the C4C program through September. 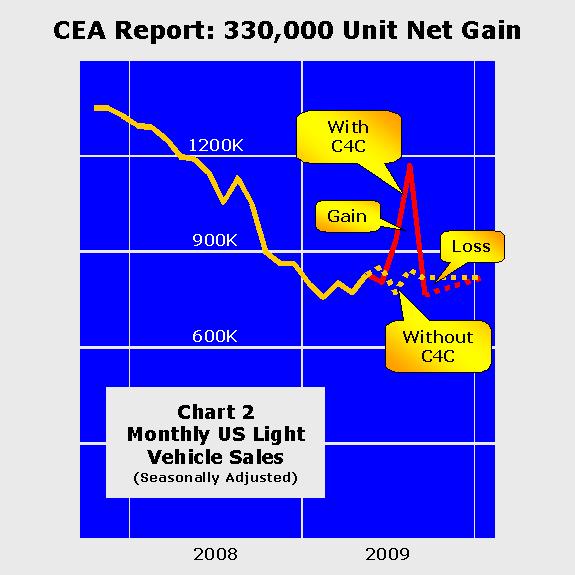 The dashed gold line also shows sales through January without C4C, based on holding the CEA's September estimate flat. The CEA predicted that the C4C program's effect would dissipate by January, so the dashed red line shows a geometrically linear path that would converge the two lines by then.
In its report, the CEA also admitted that C4C might have stimulated a net sales increase of as few as 210,000 vehicles. Examining the actual sales data more closely, one might conclude that even their pessimistic estimate was too high.
Vehicle sales rose by about seven percent in May and, according to the CEA, would have risen another three percent in June, had news of a probable C4C program not delayed 50,000 purchases. And dealers typically offer large purchase incentives in August and September anyway to make room for the new model year vehicles. This year, taxpayers covered the cost of those programs, so the incremental increase in incentives for 2009 might have been only one or two billion dollars.
So it seems likely that new vehicle sales would have stayed at least flat from June through year-end without C4C, as shown by the dashed gold line in Chart 3. That also would be consistent with President Obama's September 14 claim that the economy had turned a corner. 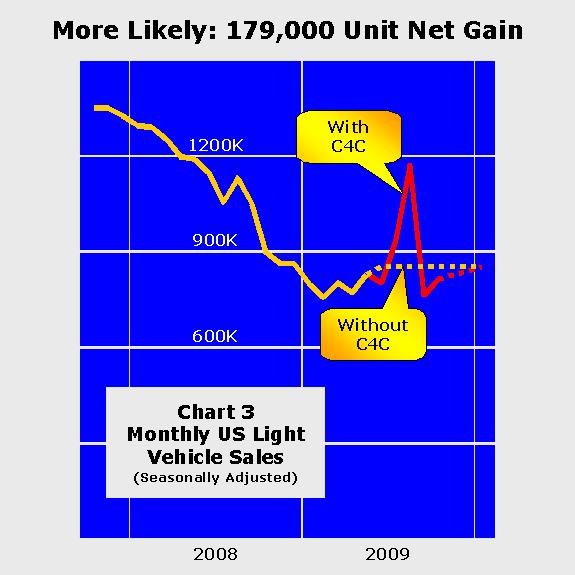 The solid red line in Chart 3 includes the recent October sales results. Again, taking the CEA's prediction that the C4C and non-C4C rates would have re-converged by January, the dashed red line shows a linear path from the October actual result to the January estimate made by holding the non-C4C value flat from June on. Those changes reduce the net effect of the C4C program to just 179,000 units. 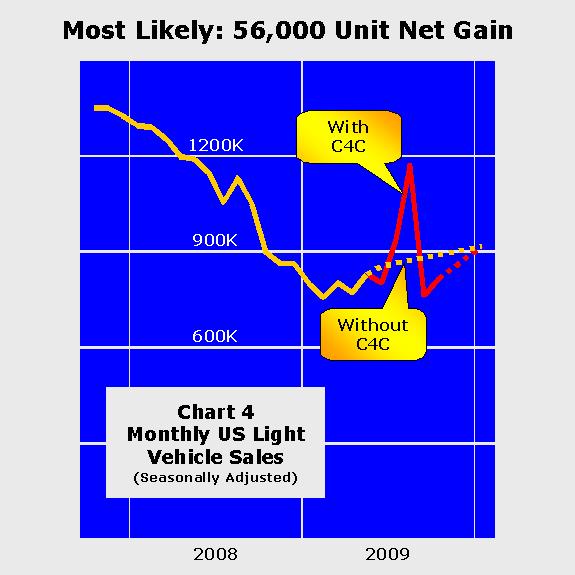 Using the same criteria, Chart 4 shows the case in which vehicle sales would have grown by one percent per month from June to January without the C4C program.  According to the CEA, sales would have continued to rise in June without C4C, so the trajectory recently had been up, not flat or down. That also would be more in line with the V-shaped recovery that many Wall Street analysts had been predicting. Under those assumptions, the C4C program generated only 56,000 additional sales.
The dashed gold lines in both Chart 3 and Chart 4 appear to be feasible and probably more likely than the CEA estimate shown by the dashed gold line in Chart 2. But they represent the road not taken, so we'll never know for sure what might have happened without the C4C program. Its effect certainly was not as great as the 700,000-unit gain widely reported by the media. It probably wasn't even as great as the lowest estimate made by the CEA two weeks later. More likely, its net effect was under 180,000 units, and could be as low as 56,000.
Three billion dollars is a lot of taxpayer money to stimulate sales of just 56,000 cars -- over $50,000 each, and many of them foreign brands. As is so often the case with government spending, we got Trabant quality at Lincoln prices.
|