Warning: mysqli_free_result() expects parameter 1 to be mysqli_result, bool given in /var/www/html/americanthinker/admin/common/functions/func.general.php on line 126
 Does the Supreme Court Still Sit? - American Thinker
|

Does the Supreme Court Still Sit?

Once upon a time a newly elected President, supported by an adoring media, claimed powers beyond the Constitution, and the Supreme Court acted.

Does that Court still sit? Some of us are asking ourselves that question these days. A week doesn't pass when some new federal infringement on the rights of a free society is enacted or promoted. Just recently, Obama's Pay Czar, Kenneth Feinberg, cut the salaries of twenty-five senior Wall Street executives. By what Constitutional authority does he do that? we ask.
While the Democratic Party seems hell bent on socializing as many parts of the free market as possible, a defeated Republican Party offers tepid resistance under uninspiring leadership.  So we wonder: where's the Supreme Court today?
Franklin Delano Roosevelt could do no wrong in the honeymoon period after his election victory in 1932.  In a crisis management response to a genuine economic emergency -- a style being mimicked by the Obama administration in a less onerous setting -- Congress passed The National Industrial Recovery Act of 1933 (NIRA). The NIRA was administered by the National Recovery Administration (NRA). Through complex wage, price and industrial codes, its task was to regulate the economy out of the Great Depression. Its regulatory codes were established as penal statutes. Obey, or face a fine, even imprisonment. The overall goal, odd as it seems now, was to raise prices and reduce production -- a dumb strategy to stimulate a sick 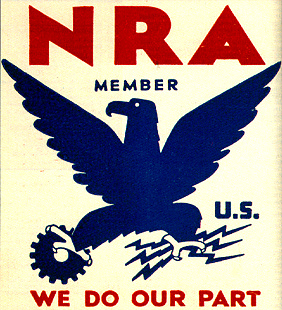 economy.
This grandiose example of central planning came at a time when socialist central planners were in vogue worldwide. Hitler was building the German economy, for war. Stalin was collectivizing the USSR, for tyrannical control. Mussolini, a darling of the American media then, was making the Italian trains run on time. And, in the 1943 California gubernatorial election, former Socialist Party member Upton Sinclair, running as a Democrat, received 880,000 votes, while the Progressive candidate got 300,000. Combined, they garnered more votes than the victorious Republican. These were watershed days in American. The question was: what would become of our political system?
Small businesses were generally opposed to the NIRA. Its regulations were too complex. It favored large corporations. And, government interference in their affairs ran against the grain of the small business entrepreneurial spirit. The Schechters were such small business owners.
Martin, Alex, Aaron and Joseph Schechter ran a Brooklyn, New York City poultry slaughterhouse and market. They killed chickens, but they weren't chicken. When the government held them in violation of NRA codes, they appealed their case to the Supreme Court. Today it's remembered as A.L.A. SCHECHTERS POULTRY CORPORATION et al. v. UNITED STATES (1935).
In the end, the Schechters won and the NIRA was done, declared unconstitutional by the U.S. Supreme Court on May 27, 1935.  On behalf of a unanimous decision, Chief Justice Charles E. Hughes wrote this (bolding added):

First. Two preliminary points are stressed by the government with respect to the appropriate approach to the important questions presented. We are told that the provision of the statute authorizing the adoption of codes must be viewed in the light of the grave national crisis with which Congress was confronted...Extraordinary conditions may call for extraordinary remedies. But the argument necessarily stops short of an attempt to justify action which lies outside the sphere of constitutional authority. Extraordinary conditions do not create or enlarge constitutional power. The Constitution established a national government with powers deemed to be adequate, as they have proved to be both in war and peace, but these powers of the national government are limited by the constitutional grants. Those who act under these grants are not at liberty to transcend the imposed limits because they believe that more or different power is necessary...The further point is urged that the national crisis demanded a broad and intensive co-operative effort by those engaged in trade and industry, and that this necessary co-operation was sought to be fostered by permitting them to initiate the adoption of codes. But the statutory plan is not simply one for voluntary effort. It does not seek merely to endow voluntary trade or industrial associations or groups with privileges or immunities. It involves the coercive exercise of the lawmaking power.

In a second part of the ruling Hughes wrote:

Second. The Question of the Delegation of Legislative Power - ...The Constitution provides that 'All legislative powers herein granted shall be vested in a Congress of the United States, which shall consist of a Senate and House of Representatives.' ...The Congress is not permitted to abdicate or to transfer to others the essential legislative functions with which it is thus vested.

Congress passed the TARP bill. Then it delegated spending responsibility to the Department of the Treasury in the Executive Branch. Some of the money bailed-out banks and an insurance company. Some bought controlling interests in two car companies. Now the government will set the senior executive salaries of the companies it controls. Meanwhile, the legacy media offers no resistance to the Washington central planners.
But then, neither did the media criticize the NIRA. TIME, Newsweek, Business Week, Editor&Publisher, and the other news weeklies were as much "in the tank" for the NIRA as the current legacy media was for TARP.  All but a very few newspapers displayed the NIRA Blue Eagle emblem on their windows. In 1933, 100,000 school children gathered in Boston Common to recite this pledge: I promise as a good American citizen to do my part for the NRA. I will buy only where the Blue Eagle flies...I will help President Roosevelt bring back good times." That ring familiar?
Roosevelt's Rahm Emanuel-like hit man was Hugh Johnson, the NRA Administrator who said, "May God have mercy on the man or group of men who attempt to trifle with this bird."
One journalist did trifle by being conspicuous in his opposition to the NRA. Frank Kent (1877-1958) was a writer and columnist for the Baltimore Sun. In 1933, he wrote of the NRA that "there has been relatively little criticism. On the contrary, practically everybody...went along with the President, giving him support. A tremendous propaganda emanated from the Washington...Anyone who did not fall in line was regarded as ‘rocking the boat' or ‘pulling back on prosperity.'" One of Johnson's assistants, Donald Richberg, said that those who opposed the NRA should "cease to clutter up progress in the United States with the rubbish of outworn ideas and dead philosophies."  Haven't we something like that recently?
By the time the Schechter's case was before the Supreme Court, the shine was off the NIRA. The blue eagle didn't fly. With the Schechter decision, the Court drove a stake through its heart. Thereafter, the U.S. economy began to improve somewhat as production increased. The chicken guys had killed the eagle.
Once upon a time, the Supreme Court acted to defend the Constitution against an over-reaching Executive Branch. Once upon a time, the Court sat. Does it still sit?
|