Last Friday we posted an article on these pages asserting Bill Ayers' authorship of President Barack Obama's 'Dreams From My Father,' based on claims made by Obama biographer Christopher Andersen. It is possible that we have now gotten direct confirmation of this from Bill Ayers himself.

Anne Leary of Back Yard Conservative was passing through Washington, DC's Reagan National Airport yesterday, and was surprised to come across Bill Ayers at Starbucks: "scruffy, thinning beard, dippy earring, and the wire rims, heading to order." 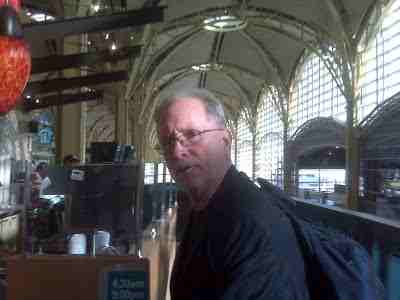 She struck up a conversation with him and snapped the accompanying photo. (I interviewed Anne about it, and thank her for permission to run the photo she took.)

Ayers was in Washington, he told her, for a conference on education.

"That's what I do, education," he said. "You shouldn't believe everything you hear about me... You know nothing about me."

To which she responded, "I said, I know plenty--I'm from Chicago, a conservative blogger, and I'll post this."

I bet his heart skipped a beat on that one.

But he didn't scowl, and didn't run off as he has been known to do. Instead, unprompted, he blurted out: "I wrote ‘Dreams From My Father... Michelle asked me to." Then he added "And if you can prove it we can split the royalties."

But he repeated insistently, "I wrote it, the wording was similar [to Ayers' other writing.]"

Anne responded, "I believe you probably heavily edited it."

Ayers stated firmly, "I wrote it."

Anne ended the conversation by saying "why would I believe you? You're a liar."

Good for her. But we are left to wonder. Despite her parting shot, Anne was convinced Ayers was in earnest. He was making a public statement. He wanted this news out there.

Was he, as she had asked, pulling our collective legs? Other sources report rumors that Ayers is very upset both about not getting any credit for helping Obama on ‘Dreams,' and may also be put off by being summarily thrown under the bus along with Rev. Wright and everyone else who becomes an inconvenience to this President.
My understanding of communists is that most would know better and keep their mouths shut. But Ayers is a bit different. He is, as he says, a "small ‘c' communist," but he is also, in a certain, slimy way, an entrepreneur, as we explained in Monday's post. (Apologies in advance to entrepreneurs everywhere.) He grew up a very rich kid, used to getting everything he wanted. Even as an adult his career has relied on a hand up from his wealthy father. His past statements and radical activities also mark him as a megalomaniac. In youth he drew attention to himself by blowing things up. As an adult "educator" he merely attempts to subvert children. But that doesn't seem to be going so well.

He is under a lot of pressure, too. Ayers and his horrid wife Bernardine Dohrn are believed to have planned and executed the San Francisco Park Police Station bombing in 1970 that killed police sergeant Brian V. McDonnell and wounded several others. Efforts to bring them to justice have been underway for some time, as brought to light this past March in a National Press Club conference put on by Cliff Kincaid of America's Survival.

Now, a recent exposé by San Francisco reporter Peter Jamison has revealed additional evidence, including testimony from other Weather Underground members, that Dohrn planted the bomb that killed Sgt. McDonnell.

Maybe in his overstressed state Bill's megalomania has just gotten the better of him.