President Obama inherited a mess of an economy.  He inherited it from his fellow Democrats in Congress.  As it turns out, which party controls Congress, especially the Senate, probably has a lot more impact on the economy than who resides in the White House.

The last time Republicans controlled Congress, unemployment stood at 4.4%, the S&P 500 closed over 1400, and the economy grew at an average of 3% per year over the four years under a Republican Congress.
After two and a half years of Democrats controlling both houses of Congress, the unemployment rate is at 9.7% and teen unemployment is at 25.5%, the highest since it started being tracked in 1948.  The S&P 500 lost more than 25% of its value.  And real GDP has declined each of the last four quarters and is, in fact, below where it was when Republicans last controlled Congress.
We tend to view the President as representing government, but he is just one person in one branch of the federal government.  Per the Constitution, the President merely has the choice of signing or vetoing budgets that Congress gives him.  All the language, all those pages and all those earmarks are put there by congressmen and their staffers.
(The President does propose a budget each February, but Congress can ignore it, and usually does if the President is from the other party.  Reagan's proposed budgets were routinely called "dead on arrival" by Democrat congressmen at the time.)
Democrats often brag on President Clinton.  It is no lie that the economy did well under Clinton.  But what is often ignored is that he was the first President since Calvin Coolidge to enjoy six straight years of both a Republican House and a Republican Senate.
Republicans controlled both houses of Congress for six years of President Clinton's two terms.  In the three terms under both Bushes, Republicans controlled both houses for just four years.  George H. W. Bush, in fact, had all four years with Democrats controlling both the House and the Senate.  You could say with much accuracy that the federal government was more Republican in Clinton's eight years than at any time since Calvin Coolidge.
Who controls Congress might just make a difference in economic affairs - more than who is President.  (The President still wields primary power in foreign affairs, as both head of state and commander-in-chief.)  Examine the graph below, for example.  It shows the unemployment rate over the last 25 years.  (Data source is the Bureau of Labor Statistics.)  I color-coded the line to be red when the Senate was Republican, and blue when Democrat. 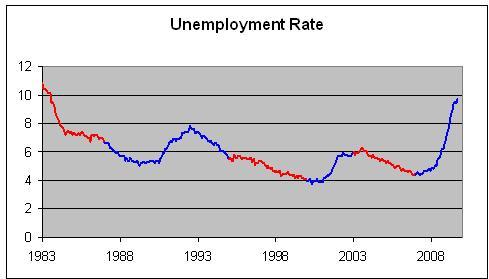 See the pattern?  Unemployment generally goes down under a Republican Senate and up under a Democrat one.  Since 1994, it's almost been like throwing a switch.  (I would think the correlation much more evident to the eye than, for example, the correlation between global temperature and man-made CO2 in the last century.  I might even call this my hockey-stick graph.)
The Senate was solidly Democrat from 1955 through 1980.  Since then it has been up for grabs, changing party six times.  Since 1980, Republicans controlled the Senate for 16 years, and the Democrats for 13.
So how did our economy do under the different parties?  See the table below.  (Data sources:  St. Louis Fed for GDP, Bureau of Labor Statistics for Unemployment, and Yahoo for S&P 500.  Changes in GDP are from 4th quarter to 4th quarter; changes in unemployment are from December to December; and changes in S&P 500 are between last trading days in the given years.)
Annualized Changes of Selected Economic Measures Over Various Periods

The patterns become even starker if we take averages for the two parties.
Weighted Averages by Party in Control of Senate

Under a Republican Senate, the economy grew at a strong pace, unemployment fell and the stock market made solid gains.  Under a Democrat Senate, the economy grew weakly, unemployment rose and the stock market fell.  That is the story of the last 29 years.  You can look it up.  (And by the way, these differences are statistically significant.)
You want to give credit for the 90s to Clinton?  Here are his policy highlights after 1994 (when Congress went Republican).

President Clinton also signed the NAFTA free trade agreement in 1993.  Although the Senate was under Democrat control then, 77% of Republican Senators voted to ratify, while a majority of Democrats voted not to ratify, or against their own President.
Dear friends, these policies (cutting taxes, cutting spending, ending programs, free trade) were policies that Republican's espoused.  Liberals hated all these policies.  For example, Peter Edelman (husband of Marion Wright-Edelman, president and founder of the Children's Defense Fund) resigned his position as assistant secretary of Health and Human Services in protest of the end of welfare.
If you want to give Bill Clinton credit for economic results during his terms, you have to link those results to his policies.  If you want to give him credit for those policies, you must admit that they were virtually all in line with Republican rhetoric and antithetical to modern liberalism.
But here's what you can't do and remain intellectually honest:  praise Clinton and damn Bush, and then encourage Obama to do the exact opposite of what Clinton did and to add multiple trillions of dollars to Bush's spending and deficit levels.
Conservatives like me have always encouraged tax rate cuts, spending cuts, free trade and eliminating government programs like welfare and the byzantine farm program.  Reagan did what he could (with a Democrat-controlled House the entire time), and the economy grew 3.5% annually over his eight years.  Clinton did these things as well (with Republicans controlling both houses of Congress his last six years), and the economy grew 3.8% annually over his eight years.
This is not hard: cut taxes, cut spending, cut programs.  Oh, and elect Republicans to the Senate.  At least that's what the facts say.  And we all know, President Obama is all about facts.  (As his memoir, The Audacity of Hope, explains, "The arguments of liberals are more often grounded in reason and fact.")
So Republicans can imitate Reagan and Democrats can imitate Clinton.  I don't care whom you imitate or to whom you give credit, as long as you cut tax rates, cut spending and eliminate wasteful and counterproductive programs.
The trouble is, President Obama and his Democrat partners in Congress are doing the exact opposite in every case.  And instead of electing a Republican majority in the Senate, we gave the Democrats a filibuster-proof majority that includes Al Franken.
Call it the Franken-Reid monster.  Pitchforks and torches ain't a bad idea.
Randall Hoven can be contacted at randall.hoven@gmail.com or  via his web site, kulak.worldbreak.com.
|