Warning: mysqli_free_result() expects parameter 1 to be mysqli_result, bool given in /var/www/html/americanthinker/admin/common/functions/func.general.php on line 126
 Understanding the Cause of Health Care Inflation - American Thinker
|

Understanding the Cause of Health Care Inflation

"This is one of those cases in which the imagination is baffled by the facts." - Adam Smith

Health care inflation is a topic that lends itself to considerable demagoguery and "straw men arguments" from the left, where it is often attributed to capitalism and the free market. Their solution: more regulation and the creation of a massive new government entitlement program to provide every American with "comprehensive" health insurance. Unfortunately, this solution will only exacerbate health care inflation as it completely ignores the major causes of the problem -- rising government health care expenditures and increased regulation.
In a new policy review prepared for the Commonwealth Foundation Laffer, Arduin, and Winegarden describe how the government's involvement in the health care system has resulted in:

Before the advent of Medicare and Medicaid and the HMO Act of 1973, the private sector funded over three quarters of the country's health care expenditures, individuals paid nearly one-half of total costs out-of-pocket and health care inflation was in-line with the consumer price index (CPI). 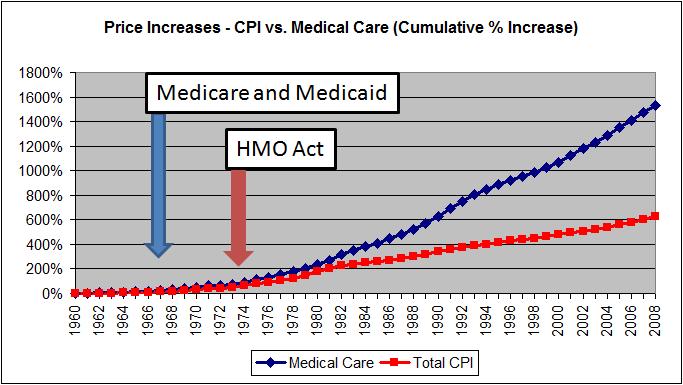 The introduction of these government insurance programs in 1967 fundamentally changed the way health care was purchased. As the government began to insert more regulation over the health care market and cover a growing percentage of health care spending, total out-of-pocket expenditures fell. Today, out-of-pocket expenses account for only 1/10 of total health care expenses.
The HMO Act of 1973 provided grants and loans to provide, start, or expand a Health Maintenance Organization (HMO); removed certain state restrictions for federally qualified HMOs; and required employers with 25 or more employees to offer federally certified HMO options. The Act gave HMOs greater access to the employer-based market, providing for the rapid expansion of HMOs and was synergistic with Medicare and Medicaid in decreasing out-of-pocket expenses.
In addition, state regulations have increased and now require health insurance companies to cover a ridiculous range of health care services including but not limited to: acupuncture, breast reduction, contraceptives, dieticians, drug abuse treatment, hair prosthesis, in vitro fertilization, massage therapy, etc. and this has had a profound effect on health care inflation. All these policies have had the net effect of changing the way Americans pay for health care services, by precipitating the change from catastrophic medical insurance to "comprehensive" health care coverage.
When a third party pays the cost of routine health care services, consumers become insensitive to prices, quality, and choice of care setting. Individuals respond to lower cost-sharing (more comprehensive coverage) by utilizing more care, as well as more expensive care because they do not face the full price of their decisions at the point of utilization.
The RAND Health Insurance Experiment provides a case study on how "comprehensive" health insurance leads to the over utilization of health care services and thus, health care inflation. In the RAND study, health insurance coverage was randomly assigned to individuals and subsequent health outcomes were compared across experimental groups. These groups were assigned health insurance with varying levels of coverage or cost-sharing. The RAND experiment found NO significant effect of the level of benefit coverage on various measures of health status for the average adult however, total health care spending increased significantly as benefit coverage increased.
The lesson from the RAND experiment is that providing "comprehensive" care leads to the over utilization of health care services without providing any real health benefits. This lesson should inform policymakers as they move aggressively on health care reform. Has it? Of course not. According to Michael Tanner of the CATO Institute:

"Under Section 59(B)(a) of HR3200, the bill making its way through the House, and Section 151 of the bill that passed out of a Senate committee, every American would be required to buy health insurance. And not just any insurance: to qualify, a plan would have to meet certain government-defined standards. For example, under Section 122(b) of the House bill, all plans must cover hospitalization; outpatient hospital and clinic services; services by physicians and other health professionals, as well as supplies and equipment incidental to their services; prescription drugs, rehabilitation services, mental health and substance-abuse treatment; preventive services (to be determined by the Centers for Disease Control and Prevention and the United States Preventive Services Task Force); and maternity, well-baby, and well-child care, as well as dental, vision, and hearing services for children under age 21." 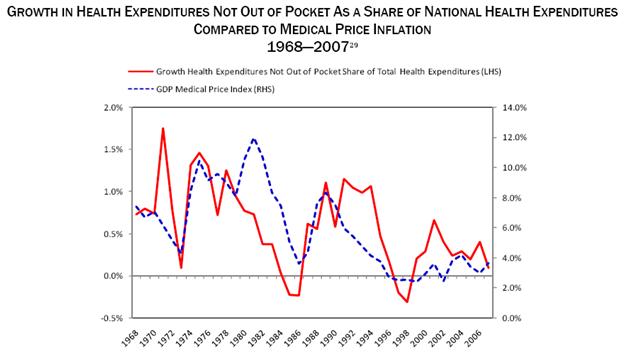 If one doubts the effect that government policies have on health care inflation, they need only to consider that health care costs are rising as a percentage of gross domestic product (GDP) all over the world - not just the United States. Hagist and Kotlikoff studied the growth in health care spending for 10 developed countries over the time period 1970 - 2002. The authors found that:

"Government health care expenditures have grown much more rapidly than the economy in all developed countries. Between 1970 and 2002 these expenditures per capita grew at almost twice the rate of gross domestic product (GDP) per capita in 10 countries studied: Australia, Austria, Canada, Germany, Japan, Norway, Spain, Sweden, the United Kingdom and the United States."

Other countries that provide "comprehensive" health insurance to their citizens only spend less relative to the US because they ration health care services through a variety of mechanisms and are tort adverse however; they are still facing skyrocketing health care inflation. So this leads to an interesting question, do we continue to repeat the same mistakes we and other countries have been making, which will lead to insolvency and necessitate rationing (and the implicit loss of freedom that follows) in order to control costs or is there another way?
Laffer et al. suggests that rather than expanding the role of government in the health care market, Congress should implement a patient-centered approach to health care reform that incorporates seven basic principles, many of which we've advocated for in previous articles:
These reforms would not only directly address the root causes of health care inflation but they would be far cheaper than the ones being pursued by The Obama Administration and Congress. Whether The Administration will acknowledge these solutions or not remains to be seen. Chances are they will continue to push the same old "straw men" arguments that got them elected in the first place and pursue legislation that will only exacerbate the problem of health care inflation - making health care more expensive for all Americans.

Andrew Foy, MD and Brent Stransky are co-authors of "The Young Conservative's Field Guide", which was published September 8th. They can be contacted through their website at www.aHardRight.com.
|