By Randy Fardal
President Obama has begun speaking in a foreign tongue.  At least some of the claims he made last Sunday during his unprecedented five-show media blitz certainly seemed foreign.  There is a translation of Mr. Obama's Univision appearance on its website, but what about the rest of us?  Where do we go to get a translation of "Barry Babble" into plain English?
For instance, during his appearance on NBC's show Meet the Press, Mr. Obama said he wants to make sure that "...you can still get health insurance even if you've got a preexisting condition..."
That statement makes no sense to the average English speaker.  Most of Mr. Obama's audience probably envisioned this analogy: If homeowners could sign up after their houses are engulfed in flames, no one would buy fire insurance until the onset of that "preexisting condition".  And more importantly, no carrier could afford to sell fire insurance.
So a fairly accurate English translation of Mr. Obama's statement might be: "Under my healthcare plan, you will have the option of staying with your current insurance carrier.  However, my plan also will put every private carrier out of business.  In other words, I'm not exactly lying -- just deceiving."
Here's more Barry Babble from CNN's State of the Union Sunday show: "I don't think that illegal aliens should be covered under this healthcare plan."
English translation: "After we grant amnesty to ten or 20 million illegal aliens, put them into Leftist labor unions, and register them as Democrat voters, they will be eligible for free taxpayer-funded healthcare.  And at that point, they no longer will be illegal.  Once again, it wasn't an outright lie -- just outright deceit."
Other Democrat leaders also seem to be able to communicate only in Barry Babble.  House Speaker Pelosi listened to English-speaking town hall protesters ask about the government takeover of private healthcare on page 17 of HR 3200 and apparently thought she was hearing World War II era German.  She began babbling about "Nazis" and "swastikas".  Meanwhile, Mr. Obama probably thinks they were speaking "Austrian" -- "Hitler was from there, you know."
Even Big Media journalists now apparently understand only Barry Babble.  ABC World News anchor Charles Gibson claimed to know nothing about the ACORN exposé, days after the story broke everywhere else -- primarily in English though.
Perhaps ACORN activists could use that as their defense.  They could explain that they simply misinterpreted the English phrase "underage prostitutes from El Salvador" as "deacons from the local Baptist church" in Barry Babble.
The term "babble" itself has relevant historical implications.  It dates back to the days of King Nimrod.  The comparisons between Nimrod and Mr. Obama are striking.
King Nimrod was a real community organizer.  According to various historical accounts, he built the Mesopotamian city of Babylon and other villages around 4000 years ago.  He is mentioned briefly in Genesis 10 of the Bible as a mighty hunter and city builder.
President Obama campaigned as a community organizer.  Comparing Mr. Obama's suspicious charity work with Nimrod's accomplishments as a city builder obviously slights Nimrod, but there still are many other, more precise similarities.
Initially regarded by his supporters as a great leader, Nimrod became more tyrannical as his power grew.  In his Jewish Antiquities book, controversial historian Josephus wrote that Nimrod "gradually changed the government into a tyranny... to bring [his subjects] into a constant dependence on his power".
Some historians say that Nimrod constructed a huge tower in Babylon, about 55 miles south of modern day Baghdad.  Also called the Tower of Babel, the structure was said to have been taller than the then-five-century-old Great Pyramid of Giza.  But no one knows why it was built. 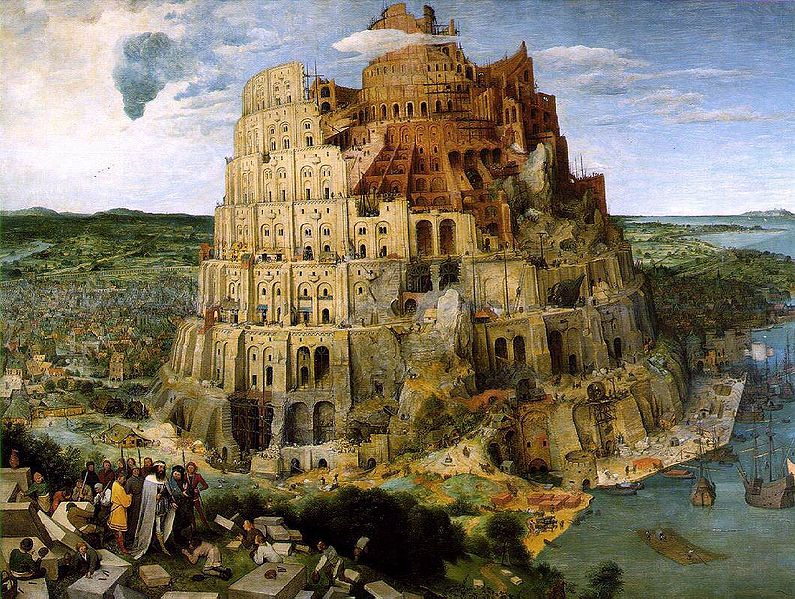 Brueghel's Tower of Babel
The theories for the tower's construction are similar to the theories about Mr. Obama's motivation today.  A few historians say that Nimrod built the tower to monitor and oppress his growing kingdom.  That reminds us of the Obama administration's snitch website or Democrat Senator Jay Rockefeller's proposal to eavesdrop on domestic Internet users or censor them, ala Hugo Chavez.
Other historians say that the tower was built to honor Baal, a nature god.  Today, the Obama administration is serving the nature god of its global warming religion by using taxpayer money to build an abstract tower of wasteful windmills, solar panels, and electric cars.
The most popular theory is that Nimrod built the tower as a shrine to himself.  And by diverting private resources to such a vast government project, he also controlled a huge portion of his empire's wealth.  Perhaps Nimrod was the first Keynesian, foolishly believing that wars, earthquakes, monument construction, and other forms of unproductive government spending are good for a nation's economy.
Likewise, with his misnamed Stimulus Bill, Mr. Obama diverted a trillion dollars of wealth from the productive private sector to the unproductive government sector.  With his healthcare plan, Mr. Obama hopes to divert trillions more to build a monument to himself.  As leader of the Leftists, Mr. Obama seemingly wants us to worship him, not Baal, or anyone else.
History also is sketchy in explaining Nimrod's demise, but many accounts offer inspiration for those that oppose Mr. Obama's growing tyranny.  Some say that Nimrod and his army were defeated by a swarm of gnats.  Although the Democrats might think of the town hall and 9/12 protestors as gnats, the collective confrontations do seem to be weakening Mr. Obama's army of arrogant lawmakers, sycophant journalists, and Astroturf union thugs.
The Biblical account says that God intervened, worrying that if the tower project were not stopped, "...henceforward nothing that they have a mind to do will be beyond their reach".  Acting as a divine antitrust prosecutor, God broke Nimrod's monopolistic empire into many smaller competing entities by altering everyone's language into dozens of mutually unintelligible dialects.  Did history repeat itself with the onset of Barry Babble?
As the Barry Babble speakers coalesce into a homogenous tribe, perhaps they will discover the huge island of Barry Babblers led by Fidel Castro.  Filmmaker Michael Moore and Democrat Representative Diane Watson already have established contact, so let's hope Mr. Obama reenacts another biblical event: He could stand on Florida's southernmost shores, part the seas, and lead his fellow babblers to the Leftist paradise of Cuba.
|