Give Me Liberty... or Give Me Health Care?

Much has been made in the recent weeks and months about the French health care system, which was ranked first by the World Health Organization (WHO), as a model for US health care reform. The French system spends considerably more (11% of GDP) than the single-payer systems of Canada and the UK but considerably less than the US (16% of GDP). The French system has been described as one that avoids rationing; where doctors have freedom to prescribe whatever treatment and order whatever tests they want; and where a resident of France gets whatever service he or she desires, regardless of ability to pay. Can it really be that good? No. Could we emulate it? For the sake of freedom and prosperity, let's hope not.

Let's start by considering the fundamentals of the French health care system. France provides a basic level of universal health insurance through a series of mandatory, largely occupation-based health insurance funds, which operate as heavily regulated private entities. Every citizen must participate including the unemployed who are taxed on unemployment benefits.
Individual premiums are funded primarily through payroll taxes. Health insurance benefits and provider reimbursement rates are all set by the government and most health care services require substantial copayments. French consumers pay 13 percent of health care costs out of pocket. Ninety-two (92%) percent of French residents purchase complementary private insurance because many health care services are not covered, and because many providers refuse to accept the fee schedules imposed by the insurance funds.
The quality of French health care is high and advocates of the system cite France's longer life expectancy and lower infant mortality rate as evidence that the system is better than the US. Unfortunately, these statistics are heavily influenced by differences in reporting (i.e., the US reports infant death in any infant delivered where France only includes infants who meet certain criteria) and differences in factors not related to health care quality (i.e., homicide rates and deaths from motor vehicle accidents bring down the life expectancy in the US compared to France) making these variables relatively meaningless to draw conclusions about health care quality.
Comparing designated markers of "health care quality" between France and the US is difficult because little data exists to provide reliable cross-country comparisons. The Organization for Economic Cooperation and Development (OECD) provides some data to make quality comparisons, which suggests the two countries are roughly even. Notably, up-to-date cancer survival rates are absent for France and this is an area where the United States excels.
An authoritative study from the Eurocare-4 working group, which appeared in Lancet Oncology, found that the United States outperformed European countries in 5-year relative survival rates for all malignancies in men (66.3 versus 47.3) and women (62.9 versus 55.8). Perhaps even more important, according to the OECD, a significant percentage of US adults perceive themselves to be in good health (89%) compared to French adults (80%).
So let's call the quality of care between France and the US even and move on to the question of "access to care." Here it is important to note that even though the French have "universal coverage" it would be incorrect to say they have "universal access." As described above, French consumers pay 13 percent of health care costs out of pocket and many health care services are not covered by government insurance funds. This has led to a robust, largely unregulated private health insurance system where individuals can purchase insurance with a higher level of benefits according to ability to pay. In this sense, the French have a two-tiered system -- a common complaint leveled against the US.
Despite this, advocates of the French system claim it provides a more even level of care than the US. Let's consider that. In France, public hospitals operate under global annual budgets and only provide services deemed to be most useful from a "collective" point of view. If something is unavailable at a public hospital, an individual may not be able to receive it at a private hospital or "clinique" if they don't have sufficient supplemental private insurance. This system is not significantly different from the US system, where individuals without health insurance can to go to public health clinics and receive appropriate testing and treatment, including medications for little or no charge and acquire any service necessary upon admission to a general hospital. Like France, individuals in the US without insurance or without generous benefits may be limited to what outpatient treatments and testing modalities they can access.
What about the fact that France pays less for health care? This can likely be accounted for by three factors. The government restricts access for certain testing and treatment modalities to limit costs (i.e., according to the OECD, France has 1/8th the number of MRI machines and 1/4th the number of CT scanners per 100,000 people compared to the US). The French system reimburses health care providers less compared to the US (i.e., the average French doctor makes $55K/year compared to $146k/year for primary care physicians and $271K for specialists in the US). Finally, the French health care system is tort-adverse. It is very difficult to sue your doctor in France and this keeps defensive medicine costs to a minimum; in the US, defensive medicine accounts for 200-500 billion dollars of wasteful spending annually.
The most important difference between the French and US health care systems is how they are financed. The French system leverages payroll (13.25%) and social contribution (5.25%) taxes to subsidize their government insurance funds. In addition, the overwhelming majority of individuals and families in France purchase supplemental private insurance. These redistributive tax policies take a heavy toll on many middle class French families and beyond who contribute a significantly higher percentage of their total income towards health care compared to Americans with similar earnings. These policies drain productivity out of the private sector and restrict freedom by inhibiting the individual's right to enjoy the rewards of his or her own labor.
In the process, economic growth and prosperity suffer. To demonstrate the relationship between economic productivity and the level of government spending and taxation in a society we graphed GDP per capita (blue) versus government spending (red) and total tax revenue (green) as a percent of GDP for the world's five largest economies in 2008. The graph displays an inverse relationship between productivity as measured by GDP per capita and government size (measured by government spending and total tax revenue); in short, as government spending and tax revenue increase, economic production goes down, which has a negative impact on all members of society. 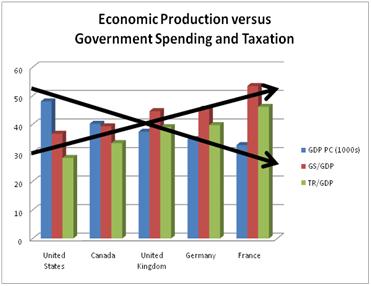 The point of this editorial was not to trash the French health care system; as we stated, the French system provides high quality care. Our intention was to clarify the advantages and disadvantages of the French system recognizing that one's view will be significantly influenced by ideology. As for us, we'll take more freedom and the increased economic growth and productivity that naturally follow it over more government-subsidized health care any day. Besides, there are many other ways to make health care more affordable without sacrificing freedom and productivity.
Andrew Foy, MD and Brent Stransky are co-authors of "The Young Conservative's Field Guide", which was published September 8th. They can be contacted through their website at www.aHardRight.com.
|