Warning: mysqli_free_result() expects parameter 1 to be mysqli_result, bool given in /var/www/html/americanthinker/admin/common/functions/func.general.php on line 126
 Why Social Security Will Go Bankrupt Sooner Than People Think - American Thinker
|

Why Social Security Will Go Bankrupt Sooner Than People Think

By Paul B. Matthews

On May 12, 2009, the trustees for the Social Security system released their annual report,

"The 2009 Annual Report of the Board of Trustees of the Federal Old-Age and Survivors Insurance and Federal Disability Insurance Trust Funds."
Following release of this report, many media outlets were quick to report (or should I say regurgitate) the findings sited in the trustee's executive summary -- notably that Social Security payroll tax collections would begin to exceed benefits paid in 2016, a year shorter than had been forecasted in 2008.
Although the news media were correct to convey this fact, such simplistic accounts failed to candidly state the true deterioration of the Social Security system over the past year.
For example, in their 2008 report, the Social Security trustees projected a cash surplus of $87 billion in 2009 -- a figure reduced to $19 billion this year.  However, even this sharp 78% reduction in the projected Social Security cash surplus failed to illuminate the nonsensical statistical assumptions used by the trustees in the prognostications -- assumptions so unfathomable they make the 2009 trustee report virtually useless.
Employment and Wages
Social Security tax collections are dependant upon two factors: the level of employment and the level of wages.  If more people are working, then naturally payroll tax collections from employees and employers are higher.  Moreover, as wages increase, at least up to the OASDI cap level ($106,800 for 2009), then payroll tax collections too will increase.
However, both employment and the level of wages have declined rapidly in the United States this year.  This is best signified by the current 9.4% unemployment rate (up from 7.6% in January), a headline rate that will certainly exceed 10% in the near future.
Moreover, average hourly earnings increased to just $18.56 in July, a 2.5% increase from a year ago.  However, according to the Bureau of Labor Statistics (BLS), the average work week totaled 33.1 hours in July, the second lowest recorded level since the agency began publishing this statistic in 1964.  (Only the June 2009 report at 33.0 hours was lower.)
So given the current state of the economy, what assumption did the trustees use as their median long-term unemployment rate?  The answer: 5.5%.  Moreover, the unemployment rate used by under their worst case scenario was 6.5%.  Accordingly, to believe the trustee's conclusions, one must assume a scenario of virtual full employment in America over the next 75 years!
The trustees even made erroneous short-term jobless rate estimates-assuming only 8.2% of Americans would be unemployed in 2009 and that the jobless rate would reach 8.8% in 2010.  Accordingly, the trustees (at a minimum) have underestimated the 2009 unemployment level by 1.2%.  Hence, with just a $19 billion projected cash cushion for 2009, it does not take a lot of additional unemployment and fewer people paying payroll taxes to materially erode this small buffer.
On a similar front, the trustee's report should be criticized for their fallacious assumptions about median US wage growth rates.  In fact, the trustee's median assumption predicts average annual wage rate gains of 3.9% (4.3% under their "high growth" scenario).
So this raises the question: With the average work week declining, capacity utilization at 68% (the lowest reading since the Federal Reserve began publishing this statistic in 1967), unemployment at near 10%, and consumer prices falling (June consumer prices fell by an annual rate of 1.4%), how could any econometric actuary anticipate a 3.9% increase in wage rates with so much slack present in the system?
The answer is politics.
However, economic logic would dictate the trustee's median wage growth forecast clearly overstates expected future US wage rates, and thus overstates expected future Social Security payroll tax collections.
The Making Work Pay Tax Credit
On February 17, 2009, President Barack Obama signed HR 1, also known as the President's $787 billion economic stimulus bill.  Contained in this legislation was the "Making Work Pay" tax credit, a refundable tax credit equal to 6.2% of earned income up to $400 for an individual or up to $800 for a married couple.  [This credit begins to be phased out starting at $75,000 for an individual filer and at $150,000 for a married couple filing jointly.]
According to the Recovery.Gov website, this tax credit will cost the US Treasury an estimated $116 billion during fiscal years 2009-2011.
However, the projected cost of this tax credit will more than offset all of the projected cash cushions for the Social Security system in each of the next three fiscal years.  Specifically, the total cost of this tax credit through September 2009 (when the fiscal year ends), is forecasted to be $19.9 billion, slightly larger than the $19 billion cash surplus previously mentioned.  Accordingly, one could correctly already argue that Social Security expenditures will exceed true payroll tax collections this year.
Naturally, Congress and the White House will attempt to spin these facts.  Whatever they assert, the fact remains this tax credit was designed explicitly to directly offset all of the 6.2% Social Security payroll tax normally paid by individuals on their first $6,451 in earnings.  In spite of this fact, it is virtually guaranteed that Congress and the Social Security trustees will continue to use phantom accounting gimmicks to suggest that this tax credit had no impact on the payroll taxes collected, and thus had no impact on the size of the "alleged" Social Security Trust fund. 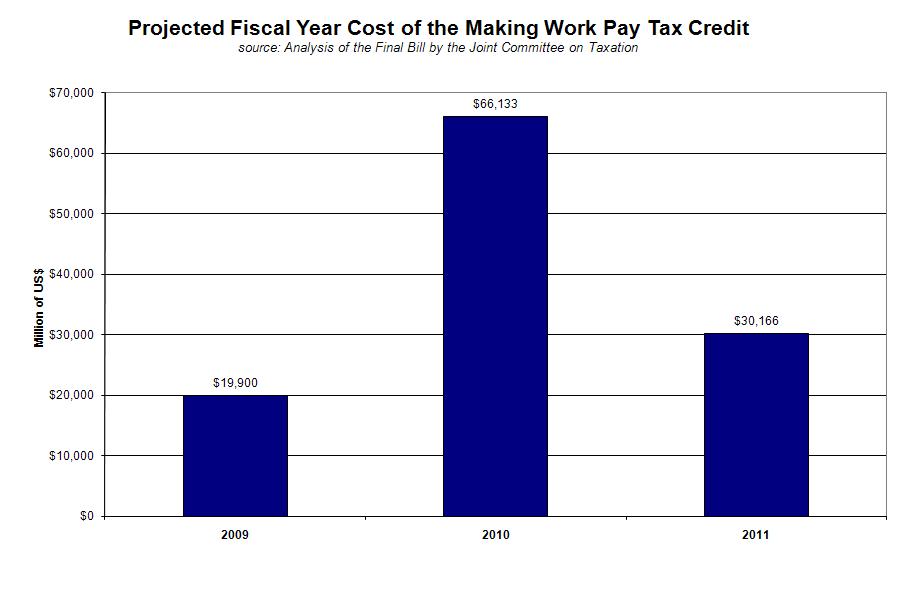 Any reputable economist understands that the Social Security Trust fund is a figment of the public's imagination, an illusion constructed by Congress to conceal the fact our elected representatives have spent all payroll tax receipts to fund general obligations for over 70 years.
However elected politicians misconstrue these facts, there can be no dispute that the "Making Work Pay" will increase the size of the 2009-2011 fiscal deficits, thereby increasing the size of the overall US debt.  Consequently, whatever accounting gimmicks are used, the argument should be made this increase in federal deficit spending and subsequent increase in debt has further weakened the Social Security system's long and short-term outlook.
The Increase in Early Retirement
As the current recession lingers, unemployment among older workers has increased.  In fact, the unemployment rate for persons over age 55 now stands at 6.7%.  Statistically, 1.97 million persons over age 55 are now unemployed, an increase of 923,000 from a year ago.
Further exacerbating the seriousness of the employment situation has been the average duration of unemployment.  Specifically, the July employment report showed the average worker was joblessness for 25.1 weeks, two months longer than a year ago.  Furthermore, over 53% of all unemployed persons were jobless for 15 weeks or more.
As the duration of unemployment lingers, many workers often face the possibility of exhausting their unemployment benefits.  Faced with a scenario of no additional unemployment insurance payments and an inability to pay a mortgage or other bills, many older unemployed workers have elected to leave the labor force, choosing to accept early (reduced) Social Security benefits in order to save their homes.  In fact, a May 2009 LA Times article noted retirements were up 25% in 2009, well ahead of the 15% forecast predicted by the Social Security Administration.

This very phenomenon was identified in an August 2006 study conducted by Courtney Colie and Phillip B. Levine from the Economics Department at Wellesley College-hardly a bastion of conservative or free market thinkers.  Their findings, detailed in a study entitled "Labor Markets and Retirement:

Conclusion
The outlook for the Social Security system has been crippled by a perfect storm of events: higher unemployment, reduced wages, a reduction in payroll taxes resulting from the Making Work Pay tax credit, the continued aging and retirement of baby boomers, and the unexpected increase in early retirement by older workers unable to find work in this tough economy.
The writing is on the wall--the Social Security system won't be able to sustain itself much longer.  When the Social Security trustees issue their 2010 report next May, the viability of this system will have deteriorated further---a fact trustees cannot hide any longer under the proverbial "political rug."  However, with media attention focused on healthcare and the death of Michael Jackson, most Americans are simply unaware of this coming tempest.
During the 2008 presidential election, Barack Obama openly campaigned to alter the Social Security payroll tax system-creating a "doughnut hole" so that all wages above $250,000 would be subject to Social Security payroll taxes-a policy if adopted would likely retard US economic growth and job creation forever.
Given the administration's commitment to "never let a serious crisis go to waste," these undercurrents could be the catalyst that allows President Obama to surreptitiously enact another plank in his statist agenda.
Paul Matthews is a former hedge fund manager and is graduate of the MBA program at the University of Texas at Austin.  He is a CPA licensed in Texas.
|