Imagine we have gone to a movie made by a former politician (who is not a scientist). In the movie we are informed (1) the earth is warming exponentially. (2) Human beings have been and will continue to cause this warming because we release a natural gas (CO2) into the atmosphere. (3) There will be catastrophic consequences from the exponential warming that will occur as a result of this release of CO2. (According to the movie the planet's icecaps will melt, polar bears will die, and cities will disappear under water.) (4) To prevent these disasters radical changes are required to reduce the amount of man-made CO2 that is being released. (5) Draconian control of carbon dioxide output must be instituted by all governments of the world both by unilateral legislation limiting the use of fossil fuels and by tightly written treaties that further force the signatory countries to reduce their "carbon footprint."

We're in a dire situation -- or so we have been told. To review, the catastrophes, and their solutions, are composed of these five (more or less) basic steps:
(1) The planet is getting exponentially warmer; (2) this exponential warming is caused by man-made releases of CO2; (3) because of the exponential warming, man-made CO2 releases are causing and will continue to cause unprecedented worldwide calamities; (4) to prevent these cataclysms man-made CO2 emissions must be immediately and dramatically reduced; and (5) the situation is so serious that individual nations must swiftly pass strict laws controlling CO2 emissions and international treaties must be quickly signed that insure that all countries are required to reduce their CO2emissions.
There are some philosophical problems that need to be ironed out before we take such arguments, and such movies, seriously: first, all of that catastrophic world-melting logic presented in the movie is based on induction. For example, the only way to conclude that the whole world is getting generally exponentially warmer is to foster the conclusion by taking lots and lots of specific measurements of exponentially higher and higher temperatures over time. (This also means that argument number (1) -- like all the other arguments in the movie -- is an argument of probability.)[i]
Furthermore, all five of the steps I have outlined above are based on what is known as sequential conditional logic.[ii] This means, put as simply as possible, that if any of the first four steps is false then the remainder of the arguments (or argument) that follow the first step found to be false are (or is) also false.[iii]  (This may seem counterintuitive - but think it through.  Go through each step, assume a step is false and then see if you can prove as true any of the others steps after the step found to be false.)
What this kind of conditional thinking means is that we jump from one "possible world" to another - but the very existence of each new "world" depends upon the existence of the "possible world" that preceded it -- otherwise we jump into a void. For example in our movie:
(1) The planet is getting exponentially warmer. This is only a possibility.  So we are talking about a percentage of warming in a possible world -- not necessarily our real world. (No one knows the exact temperature of the real world. In fact, there is no such thing as an exact world temperature. Temperatures vary throughout the planet.)
(2) This warming is caused by man-made releases of CO2. This is also only a possibility.  So, we are talking about an approximate amount of CO2 in a possible world -- not the actual amount in our real world. (No one knows the exact amount of CO2 being released in the real world.)
The exact same logic is true for steps 3, 4, and 5. All of the logic is inductive; all of the arguments are based on probability. If the conclusion (#5) is true, all of the previous arguments must also be true.
And, as anyone who studies induction knows: the longer the string of conditionals (steps), the lower the probability that the entire set of conditionals is true.
Let's take a look at the math and then at the probability that arguments (1) through (5) are true.[iv]  First I will show how the math works.  Then we will try to run some probability numbers for the five arguments we saw above. (Remember this science is admitted, by all sides involved, to be based on inductive logic, hence it is impossible that any of the five arguments are 100% true.)
Here is how the basic math works: let's look at roulette wheel -- it is an easy example to understand. If I only have one dollar and I bet that dollar (and continue to bet all my winnings if I have any winnings after each bet) on red five times in a row, what is the possibility of me having any money after my fifth bet?  (Remember, we are talking about truth in terms of probability, so another way of saying this is how true is it that I will win all five of my bets (= arguments) and have some money (= truth) at the end of my five bets?)
The probability of winning by betting on red on a standard American Roulette wheel is 47.37% each time - if I bet once. If I bet five times in a row the chances of my winning all five times is: 2.38%.  That is the correct number.[v] If I extend my bet five times in a row the truth of the possibility of me winning every time (expressed in terms of probability) drops to less than three percent.
We can now try to stick some numbers to those five arguments we saw above.
(1) The world is getting exponentially warmer.  The key word here is exponentially.  I didn't say it and I don't believe it -- but proponents of global warming do. Here is their very famous "hockey stick" graph. 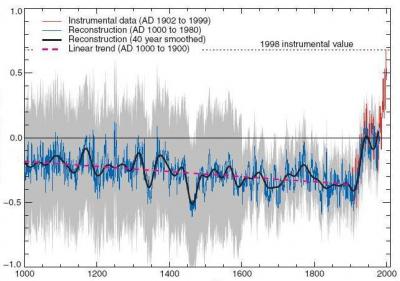 But, oops, here is a NASA graph that shows that nothing remotely resembling exponential warming has been going on in at least the last ten years. 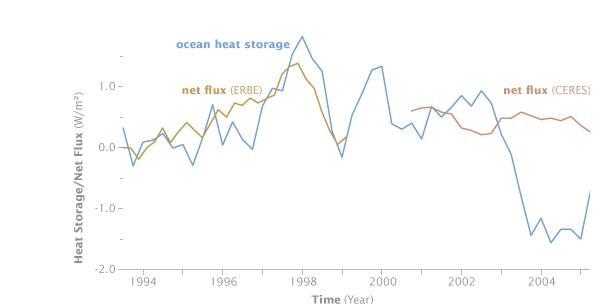 Let's be very, very generous and give argument (1) -- that the world is exponentially heating -- a 75% possibility.
Argument (2) humans cause warming by emitting CO2.  We do?  The fact is that we emit around 3% of the CO2 released into the atmosphere each year.[vi] So what is the number that expresses the possibility that we are causing global warming? I would say 3% -- but that would make a lot of Warmageddoners angry. I will be generous. Even though we only release 3% of the CO2, let's take 50% of the blame.
Argument (3) that global warming is causing worldwide calamities seems, honestly, like a bad joke to me.  Hurricanes were predicted to run rampant.  They haven't. Polar bears were all going to die.  They are doing just fine. No cities are sinking beneath the seas. None of the gloom and doom from the movie has taken place -- at least not on the consistent and rapidly increasing level that was predicted. Sorry, Warmageddoners but sane people just can't buy this part of the argument. I give it 20% -- and that is way too indulgent.
Argument (4) to prevent the disasters CO2 must be decreased. As I said, I am not seeing any disasters. But maybe it would just be nice not to have so much CO2 in the atmosphere.  So, for aesthetic reasons alone, I give argument (4) 75%.
We have come to our final argument: (5) that the governments of the world are going to lower CO2 emissions by fiat and by treaty. It is hard for me to believe that rational people even offer this argument. If the Kyoto treaty is any indication, governments have been all talk and no action when it comes to actually lowering the levels of CO2 emitted by human beings into the atmosphere. As I have written elsewhere, governments are just not good at keeping promises and at creating something from nothing.
What is the chance that all of the governments of the world will unite to significantly lower emissions of CO2?  A rational person would have to put the probability at close to zero. But I am bending over backwards here -- so I give it another 50%.
Given these lavish percentages what is the probability that the scenario laid out in the global warming scare is true?[vii] Ready for the answer: 2.8%.[viii]  True Warmageddoners can even raise the probability of all five arguments to 80%. The result is still only a 32.7% possibility that Al Gore is right. That is a long way from being 100% true.
If I ran America, I would not bet the future of our economy on the successful outcome the proposed cap and trade legislation. The odds are against it.

Larrey Anderson is a writer, a philosopher, and submissions editor for American Thinker. He is the author of The Order of the Beloved, and the new memoir, Underground: Life and Survival in the Russian Black Market.
[i] Inductive reasoning always involves possibility.  It moves from the particular facts to a general conclusion based on the number of occurrences of the particular facts. (The greater the number of particular occurrences of particular facts, the higher the probability that the general conclusion derived from those facts is true. In inductive logic the conclusion can never be 100% certain.)  I have written about the problems of the claims of an exponential increase in the earth's temperature in several different places and will not discuss them in detail in this article.
[ii] There are several types of conditional logic, e.g., material, relevance, causal, indicative, etc.  Rather than get into a debate on what specific kind of logic is in each of these steps, it is important for the reader to understand that every step of these conditionals (whatever the specific conditional logic of each individual step might be) must be met for the final conclusion (that governments must intervene to save the planet from global warming) is proven to be true.  And since all of these arguments are based on probability, none of them can be absolutely proven.  For example, anyone who asserts that #1, 2, 3, 4, or 5 in the sequence of arguments is true really means (and can only mean) that #1, 2, 3, 4, or 5 is possible. The important question, and we will address it [in note viiii] below, is: How possible?
[iii] The argument can still be technically valid but it cannot be true. This is an esoteric (and somewhat contentious) point in logic and simply included here as CYA.
[iv] It should be crystal clear by now that none of the arguments numbered (1) - (5) are absolutely true or absolutely false.  They can't be.  Logic and science don't work that way. They are either probably true or probably false.  We will try to determine how probably true as we proceed.
[v] The math is .4737 ^5 or 47.37% times itself 5 times.
[vi] This 3% is an approximation based on yet another string of inductions -- because that is how this science works.
[vii] For the record, I don't think any of these five arguments rates more than a 10% probability of being true. So my own conclusion, giving each argument a solid 10%, is that there is a 0.001% chance that Al Gore is right about man made global warming.
[viii] .75 x .50 x .20 x .75 x .50 = 2.8125%.  (See David C. Stove's The Rationality of Induction, Clarendon Press, Oxford, 1986, for technical details that support my thesis -- especially, chapters 4 and 5.)
|