Warning: mysqli_free_result() expects parameter 1 to be mysqli_result, bool given in /var/www/html/americanthinker/admin/common/functions/func.general.php on line 126
 Obama as the Wizard of Oz - American Thinker
|

Obama as the Wizard of Oz

By James Lewis
Even as Science magazine is hastily backing off on the media fraud of "global warming,"    Obama's Medi-Scare Campaign is using precisely the same fear tactics perfected by climate fraud peddlers to take over American medical care. The similarities are astonishing -- and for a very good reason: Both global frauding and Medi-Scare are pure stage-craft, made up by Hollywood mediots who are desperate to empower the Left, because that is the only thing that gives meaning to their empty lives. But neither climate fraud nor Medi-Scare do anything to fix the dire "emergency" they are trying to scare us about.
There is no emergency: There is no global warming doom coming up, and there no crisis in American medicine.  Remember that: There is no emergency. It's all completely made up, just like the Attack of the Killer Tomatoes.
Charles Krauthamer nails the ObamaScare simply on the facts:

"This is all quite mad. It creates a Rube Goldberg system that simply multiplies the current inefficiencies and arbitrariness, thus producing staggering deficits with less choice and lower-quality care. That's why the administration can't sell Obamacare."

That's it. That's all you need to know. Take some facts, and face them. That's the solution to all the harum-scarum pizzazz of the Medi-Scare campaign.
Some thing with global warming.  Here is the conclusion of an article just published in AGU: The Journal of Geophysical Research, Atmospheres.

"(The) global tropospheric temperature has for the last 50 years fallen and risen in close accord with the (El Nino - Southern Oscillation) of 5-7 months earlier shows the potential of natural forcing mechanisms to account for most of the temperature variation."

That's a little more technical, but basically, the warming of the Southern Oscillation (El Nino and related temperature changes) has always come 5-7 months before global temperature changes in the last 50 years. The authors calculate that El Nino and similar ocean temp changes account for about 70 percent of the global temperature changes. Bang. That's it. That's the facts, and that's all we need.
Everything else is "maya," as the Hindus say. It's pure illusion, tomfoolery by politicians and mediots who stand to profit from suckering us. If you believe used car commercials, you'll fall for that, too. But if you have any capacity for not getting suckered, you won't.
The American people may finally be catching on to the fact that Obama is nothing but the Wizard of Oz. Remember how Dorothy's Wizard turned out to be just a little old stage magician? His real name was Oscar Zoroaster Phadrig Isaac Norman Henkel Emmannuel Ambroise Diggs. Our Wizard calls himself Barry Soetoro Barack Hussein Obama. Like the Wizard of Oz, Obama couldn't make up his mind about his real identity either. So he became an expert faker, a grand illusionist. But behind Obama the actor, the ham who loves to strut in the limelight, there is nobody. Absolutely nobody -- just a starving ego and a bottomless hunger for self-glorification.
Which is not to say that Obama isn't dangerous. He is. But only if we fall for his Wizard of Oz act. Once Dorothy figured out there was a little old stage magician behind the screen, the power of the illusion collapsed.
Global warming and Medi-Scare are both revolutionary coups d'etat.  We are constantly being screamed at about an imaginary doom.  For the liberals, appearance is reality. Medi-Scare and Global Frauding therefore show nothing but Obama Wizz-Bang conjuring up completely imaginary dangers and imaginary solutions -- on the way to becoming The Glorious Messiah of the New World Order.
Obama is a ferocious ham. You just have to look at his million-dollar smile when he thinks he's on the TV cameras. He just lives for those moments. They make his day -- which is why he needs to hog the limelight over and over again, until even the Obamanoid networks are getting sick of it. This is not a White House we're seeing; it's a Hollywood extravaganza. That's why he needs that Teleprompter. That's why he needed 200,000 Germans cheering his Citizens of the World! speech in Berlin. That's why he had to give his Epistle to the Muslims from Cairo's Al Azhar Univeristy. That's why he needed the styrofoam Greek columns in Denver. At some level Obama doesn't care about the words; it's the act that gives him that thrill. He's an addict, the biggest ham in American history.
Like Dorothy in the Wonderful Wizard of Oz, the solution for us ordinary folks is to understand that the Wizard is nothing but a stage act, completely cobbled up to fool the audience.
Oh, and this is one of the big Saul Alinsky Rules: It doesn't matter how much power you have, but how much the enemy thinks you have.
The purpose of media propaganda is to convince us that Barack Obama is all-powerful, all-wise, all-benevolent. To stop that, all we need to do is not fall for the scam. Obama is just the little special-effects man behind the screen. 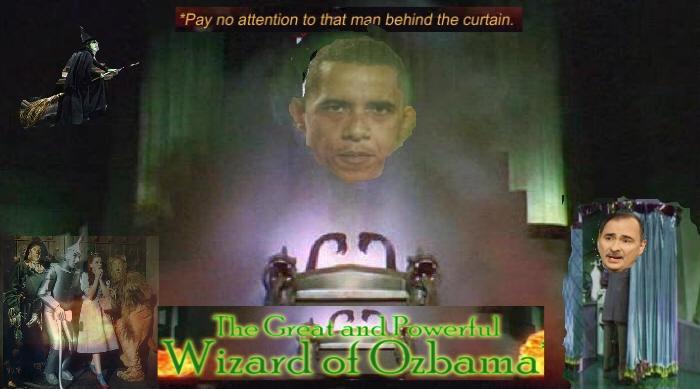