The New York Times had another in a string of embarrassing moments this weekend, part of a steep descent for the "paper of record,"  much like that of President Obama's approval numbers. And neither seems to have bottomed yet. In reality, the Times' latest disaster is quite closely related to the Obama approval ratings free fall.

A significant majority of Americans (54%-35%) ) now favor doing nothing as far as health care reform, if the alternative is one of the bills working its way through Congress (each of which is a thousand page or more monstrosity, with untold consequences for cost, coverage, or quality).
In response to the ebbing support  for health care reform and the President,  the New York Times attempted to come to the rescue of both on Friday,  with a front page "news story" in which they attacked the idea that "ObamaCare" would lead to the creation of any "death panels" -- bureaucratic bodies that would deny care to the elderly, and promote euthanasia for the very ill to hasten their departure from the world.

For the Times, it was not enough to try to undermine the fear of death panels, but to find villains for spreading such malicious falsehoods. It would seem that th 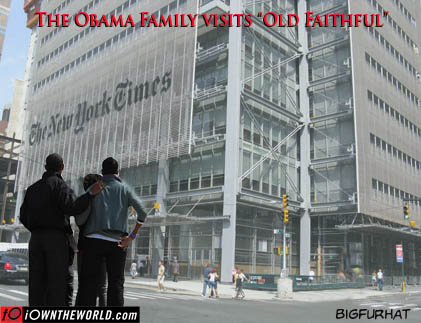 e Times is unaware, that under the new program described by Information Commissar Linda Douglass, the former ABC news flack, that the White House has been overwhelmed with emails  by informants and many self admitted perpetrators of "misinformation"  who were turning themselves them in for saying bad things about ObamaCare.

The Times "news story" singled out the Washington Times for its role in spreading the story with this whopper:

"The specter of government-sponsored, forced euthanasia was raised as early as Nov. 23, just weeks after the election and long before any legislation had been drafted, by an outlet decidedly opposed to Mr. Obama, The Washington Times."

The New York Times' condescending scorn for its rival paper is emphasized by use of the word "outlet."

If there has ever been a better example of the pot calling the kettle black, I have not found it. At this point, the New York Times' "news" pages are indistinguishable from its editorial pages. News stories, such as the one on the death panels, are not news, but stories created to shape the political debate, and use the Times' outsize influence with other major organs of the liberal mainstream media (CBS, NBC, ABC, NPR, public television) as well as  many other print journalists and bloggers, to advance a point of view.  That point of view each and every  day, could  best  be described as the presentation of  talking points prepared for the Times by Rahm Emanuel, David Axelrod, and the Democratic National Committee.

The New York Times' integrity has sunk to this level of shameless shilling.  With regard to the New York Times  story on euthanasia, if the death panel proposal were in fact an artifice, perhaps the New York Times can explain why a key Senate committee considering the legislation has agreed to change the text of its version of the proposed bill to delete any language that might be perceived as supporting such an undertaking. And even more to the  point, the President himself has been in front of the TV cameras continually since his Inauguration, and in some of his rare unscripted moments, has made comments in which he has questioned the wisdom of paying for some procedures for seniors.

Fortunately, the Washington Times did not take the hit from the New York Times lying down. Executive Editor John Solomon reacted forcefully to the libel, and demanded a retraction:

"We don't begrudge any news organization the right to report on issues important to its readership. But it is wrong, inaccurate, irresponsible and insulting for the New York Times to brand an entire newspaper as "decidedly opposed" to President Obama because of the voice of its editorial pages.  Nothing can be further from the truth when it comes to our newsroom.  Our news pages have no agenda except to accurately and fairly cover the news, including that made by the administration.  When I took over as Executive Editor I asked that the editorial and opinion pages be taken out from under my leadership so that there could be a bright line between opinion and news within the daily operation of the newspaper. If the New York Times had paid the courtesy of calling us for fair comment before publishing this morning, we could have reminded them of that. But they didn't even practice that basic tenet of journalism.
Let's look at the facts. On the morning of the Inauguration, our newspaper's front page featured an essay by President Obama, the only newspaper in America to do so. Last Sunday, our newspaper accurately described the week of victories President Obama had in Congress. This morning -- the very day the New York Times besmirched our newsroom unfairly -- we featured a front-page interview with White House health care adviser Dr. Ezekiel Emanuel in which he explained the evolution of his thinking on health care rationing. Those are the hallmarks of a newsroom doing factual and fair reporting. I challenge the New York Times to prove otherwise."

And libel is what this was. Libelous behavior, or defamation, requires that a story be false, known to be false, and malicious in its intent. It is hard to argue that that definition does not fit what the Times did in its description of the Washington Times, a paper that is far more scrupulous than the New York Times, in separating news from editorial content.
The Times caved in, offering a typically lame and self-serving correction, not on page one of course, in Saturday's paper (the lowest readership of the week). The New York Times repeated the theme of its Friday article:

"An article on Friday about the origins of the FALSE RUMOR that President Obama's health care proposals would create government-sponsored panels to decide which patients were worthy of living referred imprecisely to the stance of The Washington Times, which shortly after the election published an editorial comparing some positions of the incoming administration to the euthanasia policies of the Third Reich. In describing the newspaper as "an outlet decidedly opposed to Mr. Obama," the article was referring to its opinion pages, not to its news pages."

One other interesting aspect of the latest Times fiasco is the lead author of the death panel story: Jim Rutenberg. There is perhaps no other Times "news writer" who has proven himself so willing and able to prostrate himself in service to the political agenda of the New York Times. Rutenberg was the lead author for another front page New York Times whopper in 2008 -- a fake story that slimed John McCain, insinuating that he had an affair with lobbyist Vicki Iselin, and was no more than your basic Congressional influence peddler.

Had the Times been interested in a Presidential candidate in 2008 who was an adulterer, fathered an illegitimate child, lied about the circumstances repeatedly, may have broken the law, and proved to be one of the great hypocrites of our time, it could have sent in its investigative army to examine the rumors circulating around John Edwards. But of course, it chose not to. After all, Edwards is a Democrat, and was peddling his dedication to impoverished Americans.

Had the Washington Times published an article examining the liberal, pro-Obama bias in the news pages of the New York Times, it could have been a very long piece. And no correction would have been required in the next day's paper.

It is not just the rapid growth of online news alternatives that is destroying newspapers. The New York Times was once the most respected paper in America. Now it has become a paper in service to an agenda and a political party. Is it any wonder why people look elsewhere for news?