He is confessing that climate models leave a lot to be desired.
Clouds are very important, but it is generally accepted that the treatment of clouds by the computer models is very poor. This is neatly summarized by a few lines from the Judy Collins song Both Sides Now.

The 20 or so climate models used by the IPCC don't agree with each other as to how much warming would take place due to doubling CO2. The range is 2 to 4-1/2 degrees Celsius. There are perfectly plausible theories, based on observations, not models, that the warming would be far less, from scientists such as Richard Lindzen, Stephen Schwartz and Roy Spencer.
A 3 C degree increase in global temperature is the difference between Chicago and St. Louis. Further the models, if you believe them, predict that the change in temperature mostly will take place at night or in the winter when it is often too cold anyway. Between International Falls, Minnesota and Key West, Florida the difference in annual average temperature is 23 degrees Celsius, 7 times greater than the IPCC's 3 degree predicted change for doubling CO2.
The climate of the 20th century is inconsistent with the climate models and in fact can't be explained within the IPCC framework. The climate of the 20th century is characterized by warming from 1910 to 1940 followed by cooling between 1940 and 1970 and then more warming from 1970 with an apparent cessation of the warming during the last decade.  This is illustrated by the graph below. 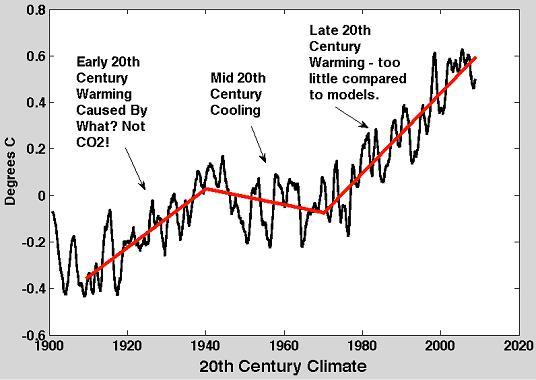 The attempts to make the 20th century climate consistent with the computer models simply don't work. Explanations that the warming is inhibited by aerosols or heat being diverted to the ocean are very improbable.
Controlling our own carbon dioxide emissions accomplishes practically nothing if the Chinese and Indians don't control theirs. They play along as long as it seems profitable. The Chinese and Indians are like the natives who happily attend church services as long as the missionaries are giving out free dinners.
Green electric power from windmills and solar energy is impracticable.  Its expensive and due to the erratic nature of sunshine and wind, solar and wind power must be backed up by duplicate power plants or by energy storage systems that are as expensive as duplicate power plants. It sometimes seems that the advocates of solar power don't realize that the sun does not shine at night. The much acclaimed Kyoto Treaty for the reduction of CO2 illogically does not give CO2 reduction credit for CO2-free nuclear power plants, something put in the treaty in response to green lobbying.
The global warming skeptics should to be given some respect and a chance to make their case. An appropriate solution would the establishment of a B team financed by the government and allowed to present the other side of the argument. If such a B team were established and given respect, in my opinion, the global warming movement would collapse because its foundations would be exposed as being weak and corrupt.

The author has provided a long technical article on IPCC use of climate models to fit the 20th century: Worse Than the Hockey Stick.

[i] Rebutting these scare stories in detail is beyond the scope of this article. Briefly: At the current measured rate it would take 15,000 years or more for the Greenland ice cap to melt and the current melting is probably transitory with greater melting during the early century. Hurricane trends are difficult to measure and the evidence is weak, even according to the IPCC. The website http://www.co2science.org/ has prepared a rebuttal to the acid ocean theory. There are far more polar bears now than early in the century and an ice-free summer Arctic Ocean probably happened 6,000 years ago and the bears are still here. The weather being more extreme is refuted (according to Lindzen) by basic physics because according to the models the poles are supposed to warm more than the tropics reducing the fundamental temperature gradient that drives weather.
|