Warning: mysqli_free_result() expects parameter 1 to be mysqli_result, bool given in /var/www/html/americanthinker/admin/common/functions/func.general.php on line 126
 Cognitive Dissonance: A Case Study - American Thinker
|

You know you are in for a treat when you read a letter to the editor and its first sentence includes the words "when I was a student at Harvard."  Such was the case with Scott Richard Evans' letter to the Financial Times of August 13.

"As a professor of business, Prof Fergusn must know at least some basic Keynesian economics - government spending to replace collapsing private spending is the only way to replace macroeconomic demand in a recession."

I think, if translated into English, that statement means that not only is massive government spending a cure for a recession, it is the only cure.
OK so far.  I guess you can believe that.  I confess to not having read Keynes.  I have merely looked at the 11 recessions since World War II, as well as the Great Depression.  In that data, there is zero evidence that government spending helps, and some evidence that it hurts.
You are also free to ignore the research of the St. Louis Fed, which released a study in 2001 (55 years after Keynes' death) called The Monetary/Fiscal Policy Debate: A Controlled Experiment.  The controlled experiment was Japan:  "the Japanese government followed a Keynesian fiscal-policy prescription and in 1992 began implementing a series of unprecedented tax cuts and expenditure increases."  The result, as we now know, was one of the slowest-growing economies in the developed world, and that "Japan's debt-to-GDP ratio has nearly doubled in the last decade, rising from 0.58 in 1991 to 1.1 in 2000."
The Fed concludes that either "fiscal policy is relatively ineffective, or implementing a successful fiscal policy is difficult."  (What the Fed means by "difficult" is that it might be theoretically possible, but no one in history has done it yet.)
You are free to rely on Keynes' theory (at least as summarized by Mr. Evans), or you can examine the data that refute it a dozen times over since that theory was conceived.  Your choice.
But Mr. Evans did not stop there.  He achieved the epitome of cognitive dissonance with this statement,

"The intellectually honest should clearly note from where those deficits have sprung, however -- from years and years of rampant uncontrolled public spending by Republican administrations."

So ... public spending both gets us into recessions and out of recessions?  To be fair, Mr. Evans did not exactly say those Republican-caused deficits caused the recession.  He merely implied that spending under Republicans was bad, while spending by Obama is good.
That's curious.  Did these Republicans face recessions?  (Yes, they did.)  Does Obama's budget for the next decade continue massive spending and deficits despite his assumption of a recovery?  (Yes, it does, to the tune of deficits averaging almost one trillion dollars per year from here out.)
To be intellectually honest, let us examine more closely the huge debt mess that Bush left for Obama to clean up.

Well what do you know?  Bush's average level of debt was a hair below average, at least up until the beginning of this recent recession.  At the end of 2007 it stood at 36.8% of GDP, pretty much where it had been for the previous several decades.
If you want to get really picky, Bush inherited a debt of 35.1% of GDP from Bill Clinton in 2000, and left Obama a debt of 40.8% of GDP in 2008 (per the CBO).  There you have it -- the smoking gun!  An extra 5.7% of GDP in federal debt held by the public.  But most of that came in 2008, a full year of recession.
Per Mr. Evans, President Bush should have spent a lot in 2008.  It's the only way to get out of a recession (or at least to replace the macroeconomic demand left undemanded by collapsing private spending).
In fact, Bush fought two recessions: one started almost the minute he was sworn into office in 2001, and a second started at the end of 2007, one full year after Democrats took over both houses of Congress.  So to be a good Keynesian, Bush should have spent like a drunken sailor in at least two of his eight years in office.  (Ironically, Bush actually ran a surplus in 2001, the year of the recession he inherited, one of the shortest and shallowest recessions in history.  That would make it a Keynesian-defying event, a virtual miracle.)
As it was, the deficit was $459 B in 2008, the largest in history up to that point in nominal dollars.
Now here is where it gets fun: Obama steps in.  The very first year under Obama, 2009, the deficit is expected to be about $1.84 trillion.  Here are some fun facts regarding Obama's budgets from 2009 through 2019.
Contrast any of these fun facts about Obama to similar facts about Bush.  Bush kept debt fairly steady and near the post-1960 average.  The debt barely increased at all in his first seven years.  Only in his last year, the first year of this recession, did it go up much, and not all that much even then.
Maybe a picture would help.  The graph below is US Statistical Abstract data through 2007 (Table 452) and CBO data from 2008 to 2019 plotted over time. 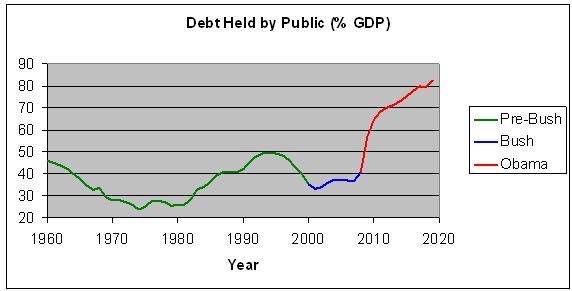 If you are intellectually honest, and bother to look at government data easily available online, this is like shooting fish in a barrel.  Bush kept the debt level virtually flat, but Obama is making it virtually explode.  Bush kept the debt near levels it had hovered about for the previous several decades.  Obama is sending it to levels not seen for over 60 years, since paying off World War II costs.
There is simply no comparison between Obama and Bush.  Heck, there is no comparison between Obama and any other president in US history.  You have to be intellectually dishonest to blame Bush for "rampant uncontrolled spending" while praising Obama for responsible spending.
What the heck does Harvard teach?  (No offense to Thomas Lifson and Larrey Anderson.)
Randall Hoven can be contacted at randall.hoven@gmail.com or  via his web site, kulak.worldbreak.com.
|