Warning: mysqli_free_result() expects parameter 1 to be mysqli_result, bool given in /var/www/html/americanthinker/admin/common/functions/func.general.php on line 126
 The Failed Promises of Government Funded Health Care - American Thinker
|

The health care debate in this country is an old story. It began in 1934 when President Franklin D. Roosevelt attempted to include government-funded health care in his "New Deal" as part of his comprehensive Social Security legislation.  President Roosevelt was very concerned that the Supreme Court might rule parts of his "New Deal" unconstitutional.  He tried to induce Congress to approve increasing the total number of justices on the Supreme Court to fifteen, attempting thereby to circumvent the judiciary and the Constitution by stacking the Court in his favor.

Subsequently, government funded health care has been debated in nearly every session of Congress since 1939.

Many people assume that the establishment of Medicare in 1965 was the result solely of Lyndon Johnson's Great Society legislation.  In fact, the establishment of Medicare was the culmination of decades of efforts by progressive liberals, and was seen as a stepping stone to government funded health care for all.  In fact, some of the tactics the government used to pass Medicare were illegal at the time, employing taxpayer money to lobby for political programs.
Today President Obama theorizes that a government "option" will increase competition, lower costs, and provide better medical care for larger numbers of people.  In any scientific endeavor the veracity of a theory is determined by whether it is supported by empirical evidence and predictive of future outcomes.  Therefore, we must examine Obama's assertions in light of the available evidence.
In order to determine whether this is the case, we must review whether government involvement has ever increased competition in the past.  We must remember that the force of law attends government involvement and that the force of law gives an advantage to the government.  For instance, Medicare and Medicaid employ price-fixing, which is illegal for any private organization.  The government decides on the worth of medical services and the providers of those services must comply.  The government therefore utilizes unfair practices to establish a monopoly, transferring costs to the private sector, artificially magnifying the cost of private insurance and hiding the true cost of government coverage.
When Medicare was passed senior citizens were promised that Medicare would not prevent them from utilizing private primary insurance if they wanted to. This assurance was false. Private primary health insurance has become all but impossible for persons over 65 to obtain.
Medicaid recipients, as well as and those on military health plans, are significantly restricted in their choices. This lack of choice has stifled competition. Contrary to the claims of the current administration, every time government has gotten involved in health care, competition has been suppressed by practices that would be prosecutable if carried out by private companies.  Far from promoting competition, a government plan will eventually eliminate private health care, thereby eliminating all competition.
Tom Miller, Director of Health Policy Studies at the Cato Institute, explained:

"As fiscal pressures mount, the federal government does not 'negotiate' with medical providers for lower prices for covered services.  It dictates below-market reimbursements with its near-monopoly power as a purchaser of health care for seniors. The full costs of such price discounts eventually reduce access to quality care and hold health care markets hostage to political exploitation."

It is naïve to believe that increased government intervention will lower the cost of medicine. All past evidence indicates that the reverse is true.  In 1965, the government promised that Medicare part A would cost $9 billion by 1990. The actual cost was more than $66 billion -- over seven times projected costs. There has never been a single large federal social program that has come in at budget or has performed as predicted.
Democrats have tried to pin the rising cost of medical care on the private sector. It is, however, government interference and government regulations that have caused the high cost of medical care in the past and that will continue to increase the costs of medical care in the future.  Medicare increases the cost of medical care by shifting federal administrative overhead to the private sector and through oppressive regulation.[i] These practices will undoubtedly accelerate under "Obamacare" as the following chart, using data from the Congressional Budget Office, indicates: 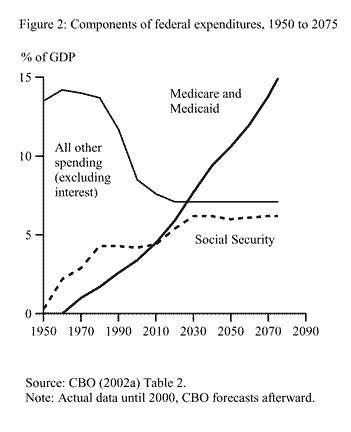 The estimated $1.6 trillion for Obama's proposed legislation will cover only about one third of his claimed 45 million uninsured. If historical precedents and evidence are any indication, the actual costs of the plan could be seven times higher than this estimate. Adding to the fiscal nightmare, Mr. Obama is planning on cutting benefits for Medicare and Medicaid in order to transfer funding to his new health plan. This is another example that government does not contain costs, but shift costs from one program to another.
The effect of Obama's program will be to increase taxes on small businesses and further worsen unemployment. This loss of jobs will result in driving people into the government-funded plan. Increasing the costs of the plan would create a vicious cycle of unemployment, increasing costs, rising taxes, and unending dependence on government.
Mr. Obama's claim of 45 million Americans without medical insurance is completely unfounded.  His health care plan will initially cover about 13 million people. However, nearly 100 million people will be eligible for the proposed government option.  As mentioned above, nothing about the plan would promote increased competition.
Once the government has a monopoly on all health care in America and the costs to the government have skyrocketed, the government will do what it has always done: use its power to ration services and increase taxes.  This will result in inferior medical care for the American people.
Once this rationing occurs, there will be no turning back.  The government will be in complete control, as it is with Medicare and Medicaid.  We need only ask Medicare or VA patients about the difficulties they face in trying to obtain payments for their medical care to understand what the end result will be.  Denial of payment for care is simply rationing by another name.  Furthermore, the evidence shows that government funded health care initiated at the state level, such as the programs in Massachusetts and Oregon, have failed miserably. We will likely have to consider the morgue as an integral part of any government health care system in the future.
Albert Einstein once defined insanity as doing the same thing over and over again expecting different results.  Mr. Obama's theories are undeniably refuted by historical fact and therefore his projections are unreliable and even dangerous.  There is overwhelming evidence that his health care plan will result in a fiscal and medical care disaster.  More important, his plan would result in a wider unconstitutional expansion of government control over our lives. We must demand real solutions, not the trading of unsustainable benefits for votes, the loss of our liberty, and greater dependence for our medical care -- not on those trained in the healing arts -- but on government and professional politicians.
[i] Television advertisements offering expensive (and "free") power scooters paid for by Medicare illustrate the scope of unneeded and wasteful government spending.
|