Obama on Afghanistan: victory is a four-letter word

Has a US Commander in Chief ever spoken this way  in the middle of a war?

President Obama has put securing Afghanistan near the top of his foreign policy agenda, but "victory" in the war-torn country isn't necessarily the United States' goal, he said Thursday in a TV interview.

Even if LBJ and McNamara felt that way about Vietnam, they didn't state it.  And Afghanistan is no Vietnam -- so far.  What Obama should have said instead was, "Conquering and occupying the country is not the goal, but victory is - -and here's how we define victory in Afghanistan."  Then he could have gone on to cite his stated goals of decreasing Al Qaeda's power in that country, as well as making the terrorist entity unable to attack the United States (although it's hard to see how his success on the latter would be measured, since Al Qaeda hasn't attacked us since 9/11).
Instead, Obama added a historically ignorant and otherwise troublesome statement when he went on to say:

I'm always worried about using the word 'victory,' because, you know, it invokes this notion of Emperor Hirohito coming down and signing a surrender to MacArthur.

Love that "you know" -- because anyone who does know history knows that's not what actually happened.
Hirohito did give a radio speech to the people of Japan announcing the country's surrender.  But he never "came down" from anywhere (is Obama somehow confusing Hirohito with Moses and Sinai?) to sign a surrender to MacArthur.  I'm not a huge expert on history myself, but nevertheless I suspected as soon as I read that particular sentence that it was probably incorrect, even before I checked it out:

The formal surrender occurred on September 2, 1945 when representatives from the Empire of Japan signed the Japanese Instrument of Surrender in Tokyo Bay aboard the USS Missouri. Shigemitsu signed for the civil government, while Gen. Umezu signed for the military. 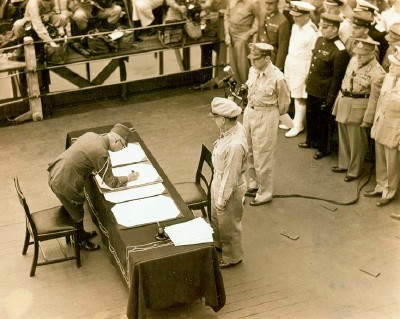 Is Obama's specific error about Hirohito important?  Not really; it's quite minor.  But it's another indication of Obama's view of history: a lot of dramatic images (or, as he said, "notions") and very little detail or understanding of what's going on, or the need to do so.  And I suspect Obama is ignorant in the worst way: he's ignorant of the extent of his ignorance.  Or perhaps he's not ignorant at all, but purposely twisting the truth.  Or maybe each, at different times.
This tendency of Obama's has been in evidence in many of his speeches: his summary of the Cold War, which he got entirely wrong.  His Cairo address to the Muslim world on their history and that of the West, in which "almost every one of his references was either misleading or incomplete."  On the campaign trail, when he showed astounding historical ignorance (or prevarication; take your choice) in his mischaracterization of the Berlin airlift.
Obama's errors are not random; they fit a certain pattern:
(1) glorification of other cultures and countries at the expense of the US
(2) exaggeration of the negatives about the US and downplaying of our strengths
(3) negative point of view about military endeavors
(4) exaggeration and/or imagining the role cooperation and negotiation plays, particularly with tyrants and enemies
(5) assuming the carrot of negotiation and dialogue is enough to change tyrants and enemies without the stick
As I wrote above, Obama's incorrect comment about Hirohito's role in Japan's signing ceremony is quite minor compared to some of his earlier whoppers.  But that's not the important part of his statement; far more troubling is what his attitude towards "victory" says (and how completely it ties into) Obama's ideas about this country's military and its accomplishments.
Obama's reluctance to pursue victory in Afghanistan is not just about that country and the peculiar challenges of combat there.  Obama is quite explicit about that.  In fact, he says he is "always worried" [emphasis mine] about using the "v" word because of the negative associations it conjures up in his mind: Hirohito coming down to sign a surrender to MacArthur.
Why that image (which never occurred in reality) would be so highly negative to Obama is a bit unclear; after all, wouldn't it represent the end of a long war and our victory over an aggressive enemy, as well as the beginning of that nation's rebirth and rebuilding under a democratic system?  And note that Hirohito was allowed to live out the rest of his natural days in peace, continuing to reign over the new Japan until dying in his late 80s in 1989.
So, what might Obama find so terrible about all of that? If I had to guess, knowing what I now know about our President, I'd say that it's related to what he sees as the humiliation ("coming down") of a non-white (in this case, an Asian) at the hands of a white American military man who was nothing if not overbearing (in this case, MacArthur), in order to not only surrender but to unconditionally surrender, and then to have his country occupied by the morally despicable US.
That is what American victory means to Obama.  And he's determined to avoid it.
Neo-neocon is a reformed liberal who specializes in the process of political change.  She blogs on that and many other matters at neoneocon.com.
|