Obama's hypocrisy and brutal inhumanity in light of recent events shocks even the most jaded among us. Americans had to listen to his daily tongue lashing about our morals and values as he defended closing Gitmo (home to the worst war criminals), admonishing us for the benign use of waterboarding in order to save thousands of American lives, and in his latest attempt to create a "torture" prosecutor.

Yet what was done at Gitmo was all done in defense of this dear country. It is a testament to our moral authority that Gitmo exists. Saner men would have lined up the enemy in front of a firing squad. It is a tribute to our moral superiority that Gitmo guards wear splash guards on their heads to protect against flying excrement and urine.
Nonetheless, Obama lectures us on morality, while now, just weeks later, we have watched him turn a blind eye to real torture: the unspeakable brutality, beatings and murders that the Islamic Republic of Iran is committing against people peacefully marching for liberty, for the principle of one man one vote. He has rewarded this regime with his recognition. Is this what Obama meant when he said we must respect Islam "even if we don't agree"?
Barack Obama warned that we cannot "keep this country safe unless we enlist the power of our most fundamental values" - which he was claiming had not been done. He said: "America must demonstrate that our values and institutions are more resilient than a hateful ideology."
He also declared: "We uphold our most cherished values not only because doing so is right, but because it strengthens our country and keeps us safe. Time and again, our values have been our best national security asset - in war and peace; in times of ease and in eras of upheaval. Fidelity to our values is the reason why the United States of America grew from a small string of colonies under the writ of an empire to the strongest nation in the world." 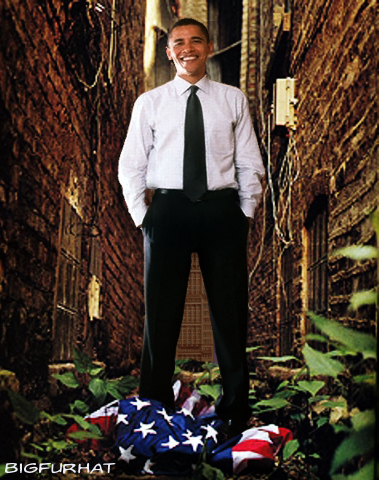 Is that from the President's statement on Iran? Did he say this in denouncing Ahmadinejad and the bloodthirsty mullahs? No. He was talking about Gitmo.
One has to ask: why did this man run for President? The knee jerk reaction to such a question is that a man (or woman) runs for President because he loves America. It is becoming increasingly clear that Obama ran for President because he hates America and wants very much to "change" it.
"There is also no question," Obama said, "that Guantanamo set back the moral authority that is America's strongest currency in the world."
No, Mr. President. Your position on Iran, Israel, Honduras, Chavez, Ukraine, Georgia, and the American taxpayer did that.
It is unconscionable that a President would invoke America's "moral authority" to pave the way for the advances of Islamic supremacism here and abroad. It is an abomination that he would sanction the actions of the Iranian mullahcracy while attempting to ethnically cleanse parts of Israel of the Jewish people. Denying the Jews' right to natural growth as a people is a crime against morality and humanity.
Obama's strange attraction to savages and despots is repugnant and enormously dangerous in a world teetering on the brink. I, for one, am sick of being preached to by a man who increasingly seems to be devoid of the basic decency that is inherent in those who have the genuine moral sense to distinguish between good and evil, right and wrong.
He speaks of respect and outreach. In Turkey last month, he declared, "We seek broader engagement based upon mutual interest and mutual respect. We will listen carefully, we will bridge misunderstanding, and we will seek common ground. We will be respectful even when we do not agree." And in Cairo he did not address specific nations, he addressed the Muslim world -- the ummah - thereby giving real credence to the global jihad.  But respect is a two way street. Where is their respect for the West? For the United States?
Obama is now poised to accept an invitation to visit the terror-supporting regime in Syria. And domestically, he has announced that he will ease restrictions on Muslim charities. Andrew McCarthy commented: "Do we really have ‘rules on charitable giving' that, as the president claims, make it especially difficult for Muslims - as opposed to others - to give? No. What we have are federal laws against material support for terrorism. These were enacted by Congress in 1996. They have been the bedrock of the DOJ's anti-terrorism enforcement ever since." But they won't be for much longer.
McCarthy also wrote last week of his "shameful release on Thursday of the ‘Irbil Five' - Quds Force commanders from Iran's Islamic Revolutionary Guards Corps (IRGC) who were coordinating terrorist attacks in Iraq that have killed hundreds - yes, hundreds - of American soldiers and Marines."
Why did Obama release these men? The Islamic Republic of Iran is at war with us (and with their own people, as the mullahs have just demonstrated so viciously). What is his plan? What is in his mind?
What are Barack Obama's "fundamental values"? From his consistent behavior since becoming President, it is increasingly clear: Obama cares little for America's fundamental values and sacrifice, and respects them even less. He is the foremost enemy of America's real moral authority in the world.
Pamela Geller is the editor and publisher of the Atlas Shrugs website and former associate publisher of the New York Observer
|