Warning: mysqli_free_result() expects parameter 1 to be mysqli_result, bool given in /var/www/html/americanthinker/admin/common/functions/func.general.php on line 126
 Obama the Trickster - American Thinker
|

Remember when Obama slyly gave Hillary the single digit salute in a campaign speech, and his fans in the audience laughed their heads off?

I've been thinking about that inspiring moment in American politics. I can't imagine any other president doing it, ever. Lincoln wouldn't have done it to Douglas; Jefferson wouldn't have dreamt of doing it to Madison. Even Bill Clinton wouldn't have done it, at least in public. Dick Morris wrote a book describing Bill Clinton clowning it up in the Oval after lying to the public about taxes. But even Clinton got his malignant yucks in private.
Obama is an even bigger trickster; it's part of his show-off narcissism. He's Playing the Dozens with us, except that the voters don't get it. He needs to be seen giving Hillary the big insult. That's the real meaning of that long bony finger to his honorable Democratic primary opponent. It might not be your dream or mine, but some kinds of people 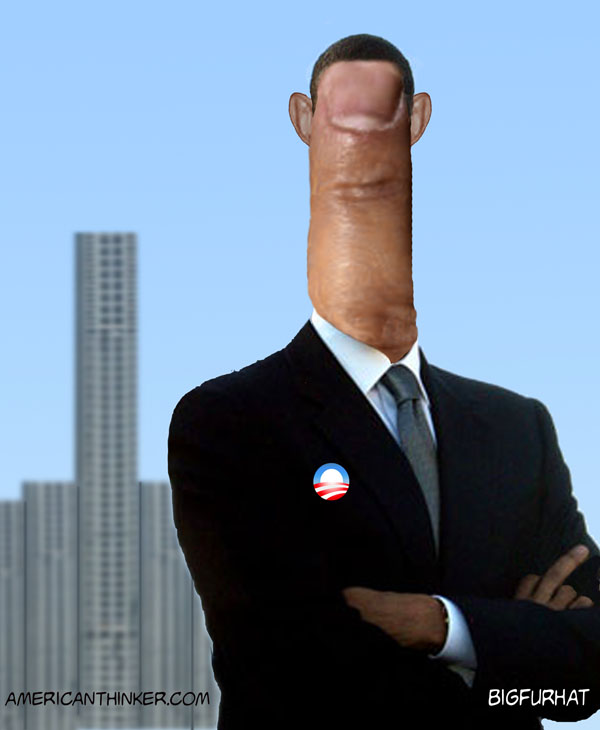 go "What a kick!" when they diss people in public.
So here's the question. If Obama the Trickster just loves to stick it to middle class America -- why do you think he nominated Sonia Sotomayor? That's a serious question. This administration is just filled with racial anger. So why would Sotomayor be its first Supreme Court nominee?
The Trickster's at it again. Sotomayor believes in the US Constitution like Obama does: not at all. But Sotomayor is not nearly as good as Obama at this double game, seeming rather dim-witted. She's given away her Hispanic Victimhood at least half a dozen times in public, not exactly what you expect from a Justice of the Supreme Court. She would be a living embarrassment to the US Constitution.
Conservatives -- meaning the squares:  normal, decent, honest people -- will want to give Sotomayor a fair hearing. Well, Stuart Taylor has done it for us in the National Journal, focusing on the reverse discrimination case by white firefighters in Connecticut. Taylor is a legal analyst, and plays it with scrupulous fairness. He writes:

"I admire many things about Judge Sonia Sotomayor ... I may well support her confirmation to the Supreme Court if her testimony next month dispels my concern that her decisions may be biased by the grievance-focused mind-set and the "wise Latina woman" superiority complex displayed in some of her speeches.
"But close study of her most famous case only enhances my concern. That's the 2008 decision in which a panel composed of Sotomayor ... upheld New Haven's race-based denial of promotions to white (and two Hispanic) fire-fighters because too few African-Americans had done well on the qualifying exams.
"...  the detailed factual record strongly suggests that -- contrary to Sotomayor's position -- the Connecticut city's decision to kill the promotions was driven less by its purported legal concerns than by raw racial politics.
"... the unmistakable logic of Sotomayor's position would encourage employers to discriminate against high-scoring groups based on race -- no matter how valid and lawful the qualifying test..."

That's why Obama picked Sotomayor. Her job on the Supremes will be to keep the Affirmative Action Establishment in power. Those are the race/gender/sexuality statist demagogues who seized power when the Boomer Left took over. That is why we have Leftists in control of the Democrats, the universities, and the Chicago Machine. It's why the deeply dishonest ideologue James Hansen has a fat salary at NASA while systematically lying about global warming.  It's why the newspapers are crashing and the Democrats still win elections. It's why California, blessed with resources, is broke and all the big cities are begging for Federal handouts.
Affirmative Action is the new American spoils system -- and race, gender, and sexual demagoguery are always the key. It works by intimidating middle class whites. The Left has taken over Europe with the exactly same tactics. Just read the UK news.
Anti-white racists must be worried about their hold on power, because the US Supreme Court has heard of the Equal Protection Clause of the 14th Amendment. Even Justice Ginsburg keeps saying that legalized racial discrimination is only temporary, because, yes, it's obviously unconstitutional. It's affirmative racism.
Well, you can bet that the race/gender/gay industry isn't going to go quietly into that dark night. Sotomayor's nomination is a sign to the racism industry that it is still in power, and that its future is assured if Obama has anything to say about it. It's a payoff to the race industry, and an invitation by Obama to expand racial protections to Hispanics and illegals.
Sotomayor's mission on SCOTUS is to dig Affirmative Action into solid rock, to keep it entangled so deeply in the network of SCOTUS decisions that this country will never return to the equal protection of the laws. She will work to give illegal aliens all their "rights" under the UN Human Rights Charter -- which nobody voted for except the unelected transnational Ruling Class.  But the American taxpayer will pay for it, oh, many times over.
It's all a gargantuan finger to White Middle Class America. If you don't get it he still gets the last laugh at your stupidity.
Obama's Trickster is a mythical archetype. Tricksters appear all over the world in folklore, jokes and legends.  The Batman comics and movies actually featured a villain named the Joker.
But so far, no president has ever been a Trickster character until Barack H. Obama.
We are to be the Trickster's victims forever.