Warning: mysqli_free_result() expects parameter 1 to be mysqli_result, bool given in /var/www/html/americanthinker/admin/common/functions/func.general.php on line 126
 At the NAACP, Obama Removes His Mask of the Great Unifier - American Thinker
|

At the NAACP, Obama Removes His Mask of the Great Unifier

By Lloyd Marcus
It is truly a sad day in America when the president of the United States fans the flames of racial hatred. The man elected to be president of all the people, in his speech at the NAACP basically said, though America is racist, sexist and homophobic, you can make it in spite of those white SOB's attempts to stop you. Wonderful. How inspiring. The NAACP audience erupted in applause. Obama's condemnation was "red meat" to the liberal, protective of their victim status, organization.

"Make no mistake, the pain of discrimination is still felt in America (applause) by African-American women paid less for doing the same work as colleagues of a different color and a different gender; by La-tin-os made to feel unwelcome in their own country; by Muslim Americans viewed with suspicion simply because they kneel down to pray to their god; by gay dead brothers and sisters still taunted, still attacked, still denied their rights."

Interestingly, Obama's list of victims did not include Christians and straight white males. This is because it is open season on bashing them. According to liberals, everything wrong in the world is the fault of Christians and straight white males. Case in point, Pulitzer Prize winner Maureen Dowd's column in the New York Times in which she demonizes white men. Aren't Obama's statements in his speech eerily close to the teachings of Rev. Jeremiah Wright who said, "America is controlled by rich white people"?
Mr. President, as for the victims in your speech; one of those African American women you claim America has victimized used her money, power and influence to help get you elected. White guys 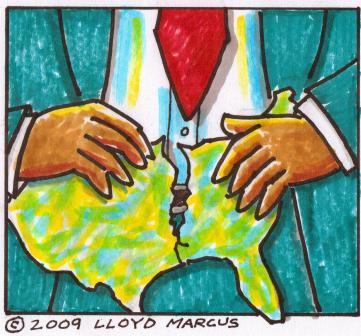 did not blow up the Twin Towers, murdering three thousand Americans. Muslims did. So, excuse me if I give them a second glance in an airport. Only illegal Latinos are unwelcome -- just as with every other ethnic group. When an openly gay beauty pageant judge viciously trashes a contestant for humbly saying she believes marriage should be between a man and a woman and much of the media sides with him in ridiculing the woman, it is safe to say America is pretty tolerant of homosexuals. All of Obama's accusations against America are untrue, divisive and evil.
Does racism exist in America? Of course it does -- along with every other sin. But are we a racist country? Absolutely not! Why would our president want to reinforce such a divisive paradigm? And why did the NAACP so enjoy Obama's attack on white America?
If MLK were magically brought back to life, he would be heartbroken over what has become of this organization and the civil rights movement. He would ask,"Is Jesse still running to every photo op? And, tell me again how this Reverend Al guy became our spokesperson"?
Dr. King required his marchers to be sober, neat, clean and even tempered. He never preached hate. Quite the opposite, Dr. King dreamed of a day when all God's children, black and white, would join hands as brothers and sisters. Dr. King fought, suffered, and died because he wanted the Negro (and that is a word he proudly used) to have an equal opportunity to strive and achieve excellence. And yet, I heard that a civil rights group called a test racist because it used the word "sofa" rather than "couch" and black kids would not know they are the same. Give me a break!
Dr King would beam with pride over former Secretary of State Condoleezza Rice and U.S. Supreme Court Justice Clarence Thomas, both hated by the NAACP. I can hear him saying, "Negroes, Secretary of State and U.S. Supreme Court Justice, praise God!"
Dr. King's once great organization has become a liberal partner with the Democratic Party in their exploitation of blacks. Keep telling them they are victims, America is against them and they need Democrats to defend and protect them. This will ensure that the NAACP will remain relevant and Democrats will continue getting 95% of the black vote. This is why the NAACP went wild with applause over Obama's speech trashing America.
If MLK were alive today, I believe he would be a proud member, not of the NAACP, but of the organization of which I am president, the National Association for the Advancement of Conservative People of Color.
The NAACPC's philosophy and goals are far more in keeping with Dr King's dream. Personal responsibility. Judging people by the content of their character rather than the color of their skin. America is the greatest land of opportunity on the planet for all people. Sadly, our president believes she is an evil place where successful white males victimize everyone.
Though far from perfect, I remember to put the seat down most of the time, my amazing wife still thinks I am the best thing since sliced bread. Is it unreasonable to expect the leader of the free world to have, at least, a similar affection and opinion of his country? Dr King would be appalled.
Lloyd Marcus, Singer/Songwriter of the "American Tea Party Anthem" is President, NAACPC (National Association for the Advancement of Conservative People of Color)
|