America sliding into a pit of foreign debt

By Howard Richman, Raymond Richman, and Jesse Richman
There are two types of news: the news that fits and the news that would cause fits if it were printed. A responsible press would cover both. Unfortunately, economic reporting in the United States doesn't always do this. If news of an economic bombshell gets suppressed... did it really explode?
The graph below shows the United States net foreign debt. It hit an unprecedented $3.5 trillion, 24.3% of our GDP, at the end of 2008, according to a report issued on June 26 by the Bureau of Economic Analysis. When foreign debt rises as a percentage of GDP, a country becomes less and less able to pay off debt from its income stream. 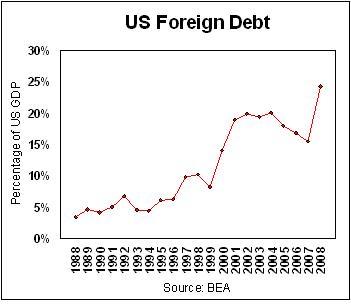 Normally the dramatic rise shown in the graph for 2008 would have been newsworthy but on July 8, almost two weeks after the report was issued, one of us did a Google news search and found that only the Washington Times covered the story. Elsewhere in the news were references to foreign debt in Argentina, Armenia, Bulgaria, China, Colombia, Croatia, Egypt, Indonesia, Mexico, Namibia, Peru, Philippines, Poland, Russia, Turkey, and Zimbabwe, but no references to America's rising foreign debt.
Alert readers of the American Thinker know that the International Monetary Fund predicted a huge rise in American foreign debt in 2008 and 2009, but American economic reporters have not wanted to make our rising foreign debt a story, perhaps because they don't want to make the Obama administration look bad.
Ever since taking office Obama has been expanding U.S. government borrowing from abroad. On April 15, Treasury Secretary Timothy Geithner, intent on borrowing more money from China, issued a report to Congress which pretended that China does not manipulate its currency, despite the fact that China had already collected about $1.7 trillion dollars of our debt as a byproduct of its non-existent currency manipulations.
A Labor Department report issued on July 2 did get media attention. The latest numbers show U.S. manufacturing employment declining in June to 11,854,000 workers, down 136,000 since May, down 786,000 since President Obama took office in January and down 5,260,000 since President Bush took office in January 2001. 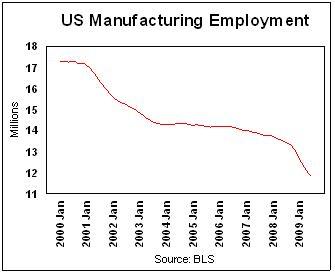 Our rising foreign debt and our falling manufacturing employment share a cause: the trade deficits. Many of our trading partners including Japan, China and Saudi Arabia, have adopted mercantilist policies (encouraging exports while discouraging imports). Instead of buying our goods with the dollars that they earn from trade, they have been buying our financial assets.
Japan was the first and has been running consistent trade surpluses with us since 1964. China emulated the Japanese policies, and its trade surpluses exploded when it began to allow private enterprises, including foreign ones, to open factories in China. American economists euphemistically called their policies an export-led development strategy and applauded their success, ignoring their barriers to American imports, the harm being done to American industrial workers, and the debt that we were piling up.
At first, the central banks in these countries used the surplus dollars gained from trade to build up dollar reserves deposited with the Federal Reserve Banks. Then they continued to buy U.S. financial assets, including hundreds of billions of dollars of U.S. government bonds, bank certificates of deposit, and corporate stocks and bonds. In effect they have been lending the U.S. the dollars they earn by exports so we could continue buying more from them. We get their consumer goods and a financial crisis, while they get our IOUs.
A substantial share of our trade deficits accrued to oil-exporting countries. Most of the oil we import comes from Canada and Mexico which gives us no cause for alarm since they are members of the North American Free Trade Area. When they get richer, they buy more American products, including manufactured goods. For every $1 we spent on Mexican goods and services in 2008, it bought 75¢ of American goods and services. In contrast, the OPEC countries just bought 35¢ and China just 25¢. We might not need OPEC oil were we to drill for oil where the U.S. Geodetic Survey has identified huge potential reserves on public lands, off-shore and in the Arctic.
At the same time that our foreign debt is skyrocketing, we are losing manufacturing jobs, and thus the ability to export goods in the future to pay back this foreign debt. This policy is not sustainable. We are heading toward a dollar crash, high inflation, high interest rates, or a combination of all three, all because we won't require that the mercantilist countries buy our goods instead of taking our IOUs!
In our 2008 book (Trading Away Our Future) we compared America's rashness in accepting this bad bargain to Esau's rashness in Genesis (25:29-34). Here is the JPS translation of the incident:

Once when Jacob was cooking a stew, Esau came in from the open, famished. And Esau said to Jacob, "Give me some of that red stuff to gulp down, for I am famished."... Jacob said, "First sell me your birthright." And Esau said, "I am at the point of death, so what use is my birthright to me?" But Jacob said, "Swear to me first." So he swore to him, and sold his birthright to Jacob. Jacob then gave Esau bread and lentil stew; he ate and drank, and he rose and went away. Thus did Esau spurn his birthright.

If Esau were thinking long-term, he would have made a better bargain with Jacob. As a hunter, he would have had pelts or meat to trade with Jacob. Instead, he traded away his future. America is making the same bad bargain. As we noted in our book: "We are trading away our future for a mess of mercantilist produced pottage!"
The authors maintain a blog at tradeandtaxes.blogspot.com, and co-authored the 2008 book Trading Away Our Future: How to Fix Our Government-Driven Trade Deficits and Faulty Tax System Before it's Too Late, published by Ideal Taxes Association.
|