Warning: mysqli_free_result() expects parameter 1 to be mysqli_result, bool given in /var/www/html/americanthinker/admin/common/functions/func.general.php on line 126
 The Second Coming of Jimmy Carter - American Thinker
|

The Second Coming of Jimmy Carter

Remember the good old days of the Jimmy Carter presidency when the US saw the combination of high inflation and high unemployment? We are sowing the seeds for a return to those days of national malaise.

The US economy is suffering from the economic trifecta of:
The Obama administration has taken and is planning to take several actions that will affect the US economic and financial base.
Automotive industry:
In November 2008, the federal government provided to GM and Chrysler a loan of $17B from the TARP funds which were intended for the banks. This was George Bush's plan to make sure GM did not fail on his watch, so he kicked the can down to Barack Obama. Chrysler's bankruptcy resulted in the UAW (actually, the UAW medical plan) obtaining 50% interest in Chrysler and 40 cents on the dollar. The secured creditors whose loan provisions put them ahead of the UAW received 29 cents on the dollar and no equity. This was a transparent play by Obama to break the rules of pre-existing loans in order to pay off a political ally, the UAW. The secured debt holders that were berated by President Obama include mutual funds and other investment vehicles being held for retirement funds of workers.
These bankruptcies were the brain child of Obama's car czar and automotive task force. None of the members of the task force have any experience in the automotive industry, meaning they don't know product or customer service. Presumably, product will be dictated by the automotive experts in Congress. Stephen Rattner, the head of the Administration's automotive task force was the head of Quadrangle, a hedge fund. The co-chairmen of the task force includes Tim Geithner, Secretary of the Treasury, and National Economic Council Director Lawrence Summers. In the case of General Motors, the automotive task force has decided to replace half of the board members. This leaves in place half of the board that has overseen the demise of GM in cooperation with the UAW who will be a significant shareholder. Putting these people in charge of GM  is as absurd as putting control of the banking system in the hands of the people who caused the banking system to fail in the first place. Is there a pattern here? America has become a culture that rewards failure.
Housing:
The administration plans a bailout of $275B to refinance or modify mortgages of homeowners who have little equity in their homes. And, he plans to spend an additional $75B to modify mortgages of homeowners who are at risk of foreclosure. This is a particularly bad idea based on data coming from the office of the Comptroller of the Currency. In the table below, the re-default rate for subprime mortgages eight months after the loan has been modifid (and this is for loans modified in Q1 of 2008) is 65%. The homeowners who had these loans modified were unable to make even the revised payment plan. The Obama plan to refinance or modify home loans of subprime or Alt-A mortgagees, will be a failure based on current data from the Comptroller of the Currency. The housing market cannot reach a bottom until these foreclosed homes are put into strong hands, that is, hands that will take them off the market. Until then, housing prices will continue to fall and any government program to prop up housing is wasting money. This proves the saying - fool me once shame on you, fool me twice, and you may be qualified for a government bailout. 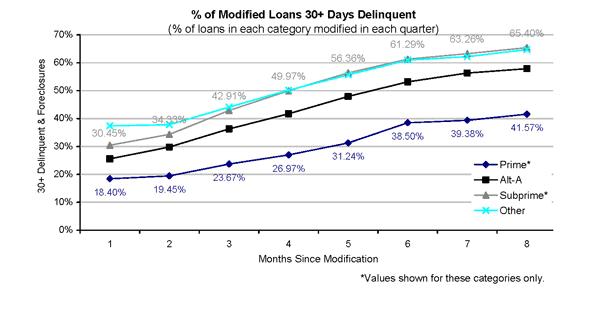 Source: Office of the Comptroller of the Currency.

Government debt:
At the end of 2008, the federal debt, excluding the unfunded liabilities for Medicare and Social Security stood at 41% of GDP according to the Congressional Budget Office. As the table below shows, the CBO expects the federal debt to grow to 82% of GDP by 2019 based on Barack Obama's budget. 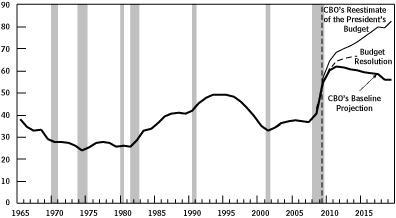 And, this debt level does not contemplate any impact from the Administration's anticipated health care program. The debt held by the public will double from $5.8T in 2008 to $11.75T in 2019.  As the tables below shows, $2.3T of US treasuries are held by foreign countries, and the US will need to issue an additional $6T over the next ten years. How much of the debt will foreign governments hold and what cost to US national security? Will China use its leverage with North Korea to end its nuclear program, and if so, at what price for the US.
Table 1  Major Foreign Holders of US Treasury Securities 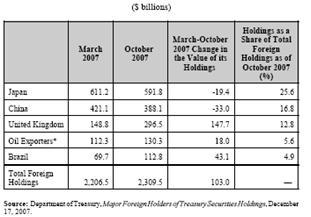 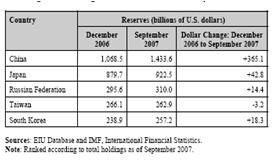 Another explanation to address the US debt is proposed by John Taylor, Professor of Economics, Senior Fellow at the Hoover Institution, Stanford University.  He states that the US can reduce its debt level as a percentage of GDP by allowing inflation to double the nominal (not the real) GDP, which will get the debt level back to 41% of GDP from an  expected 82% in 2019. This accomplishes the following:
On the positive side, this inflation tax will reduce the requirement for issuing more debt.
Obama is proceeding with expensive and costly new government programs during a time that much of the nations wealth has been destroyed, declining GDP and rising unemployment. And, as we can see from the housing bailout, these programs are ineffective. This administration is creating an economic environment where opportunity will be dictated by the government, and that means reduced opportunity, higher inflation, and higher taxes for the next generation(s).
|