Barack Obama signed the Stimulus bill on Feb. 18, 2009 amid much fanfare. Proponents of the bill stated that it would save or create 3.5 million jobs. Now, four months have passed since the passage of the stimulus package, its time to take a first look at the stimulus.

By the president's own words, the stimulus should improve employment in America and make us more prosperous. Prosperity can be measured as growth in GDP, growth in asset values such as real estate and stocks, and growth in personal income.

The Stimulus spending allocated for 2009 is $140B. Of that amount, $40B has been spent, which is in keeping if the spending is linear over the course of the fiscal year.
The Bureau of Labor Statistics (BLS) reported the unemployment rate at 9.4% for May 2009. The table below shows that the trend in the unemployment rate has not changed since late 2008.
Figure 1 - (Seas) Unemployment Level 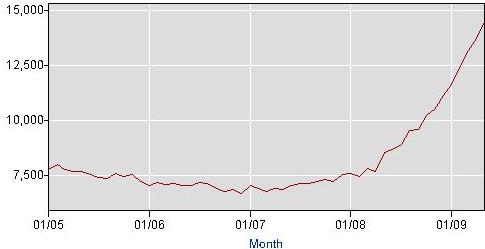 The GDP for Q1/2009 decreased at an annual rate of 5.7%. Economic growth is not just a function of the Stimulus, but will also be affected by Obama's efforts to restructure healthcare, impose a carbon tax, and his new call for PAYGO that requires every spending increase to be paid for with the notable exceptions of healthcare, the Stimulus that was passed, and the current entitlement behemoths of Medicare and Social Security.  The themes for the future global economy are de-levering or debt reduction, more regulation, and reduced consumption according to Bill Gross, Managing Director, PIMCO Investments. Compound these factors with the government's reach into running automotive and financial  companies, and healthcare, and growth rates as measured by GDP will not reach the 3% rate previously achieved in the US. As the US comes to look more and more like Europe, the US will see GDP growth and employment that looks like the Continent as well.  As the table below shows the US has bested the EU 15 nations from the period of 2001 to 2005 in both GDP growth as well as employment growth.

Figure 2 - US vs. EU 15 Economic Comparison
The Stimulus was passed quickly with the call that if something wasn't done quickly, unemployment would reach 8%. It is now 9.4% and rising. Furthermore, the actions taken by this Administration are driving up interest rates and driving down the dollar. Health care, carbon tax, the Stimulus, and the private industry bailouts are all actions that will reduce growth, delay the bottoming of the real estate market, and extend the economy's weak performance.
Obama should declare the Stimulus a success and immediately cancel future payments under this abominable legislation. Wisdom is being able to look at the results and change course as needed.
|