Honoring the Victims of Honor Killing

For the very first time, non-Muslims have begun to take note of the victims of Islamic honor killing, and to serve notice to their killers that the victims will not be forgotten, or their murders ignored. Memorials to Aqsa Parvez are being erected in the Canadian town of Pelham, Ontario, and in Jerusalem.

Remember Aqsa Parvez? She was brutally murdered by her father and brother in December 2007 for refusing to wear the Islamic headscarf. But that was only the beginning: the abuse of this girl continued. She was buried in an unmarked grave. Her family refused to acknowledge her life, as she had "dishonored" them. In defiance of her devout father and brother, she had refused to live under the suffocating dictates of Islamic law. The eleventh grade student began taking off her hijab, a traditional Islamic headscarf, when she went to school, and would put it back on when she returned home.Her dad would go to her school during school hours and walk around trying to find her, trying to catch her not wearing Islamic garb, talking to boys or hanging out with "non-muslims"."She wanted to dress like us," said one friend of Aqsa. "To be normal." For this, her family prefers that she be forgotten - unknown, unloved, unmourned.
Last December, when I read that Aqsa lay in an unmarked grave, I felt sick. I started a memorial fund to get her a headstone. But I had no idea how difficult and ugly it would be simply to honor a teenage girl in Canada who just wanted to live free -- and how eagerly Western non-Muslims would aid and abet the family's efforts to dishonor her in death as they did in life.
Readers of my weblog, AtlasShrugs.com, opened their hearts and their wallets, and contributed $5,000 for a headstone for Aqsa. Robert Spencer of Jihad Watch joined the effort, and we approved a design for a headstone that read, "In loving memory of Aqsa Parvez, Apr. 22, 1991-Dec. 10, 2007 -- Beloved, remembered and free." All was going according to plan until, after much silence, Meadowvale Cemetery in Brampton, Ontario, where Aqsa is buried, advised me that the family (yes, the family that murdered her) had refused to "sign off" on the headstone. The director of the cemetery said: "The family wants changes and is planning on coming in to see me. They did not book an appointment yet but I hope to see them soon."
Of course, the family never came, and when we inquired as to purchasing a plot near Aqsa's body, we could not. Not a tree. Not a rock. Not a bench. All the plots were owned by the Islamic Society of North America. I tried to contact the family at that time, but they would not take my calls -- I spoke to the them once, but they pretended not to speak English. And they were adamant: the family refused to allow the headstone to be put on Aqsa's grave, and according to the cemetery, could remove it if it were placed there by others.
But those of us who had contributed to the Aqsa Memorial Fund were determined to make sure that Aqsa would be memorialized. We checked into other locations, made plans, only to see them canceled at the last minute out of ... fear. We checked into the arboretum at the University of Guelph in Ontario, but a university official wrote me to say that "no matter how worthy, a memorial to Aqsa Parvez would draw much public attention and would thus be inconsistent with current use of The Arboretum."
But not everyone was ready to cower before Islamic anti-woman violence. Scott McLeod, the fire chief in Pelham, Ontario, proposed a resolution honoring Aqsa to City Councilor 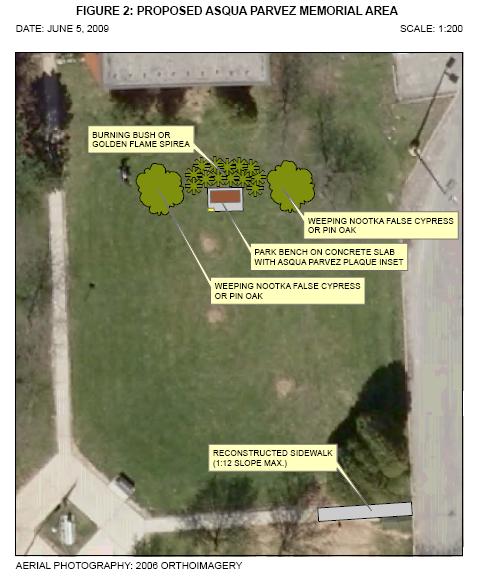 Sharon Cook -- and she went to work getting it passed. The Aqsa Parvez Memorial will be erected in Pelham this summer! A granite bench will be inscribed: "In loving memory of Aqsa Parvez, Beloved, Remembered and Free."
This will be placed in the Aqsa Parvez Peace Park.
Yes, the Aqsa Parvez Peace Park. I think she'd like that.
And in addition, there is the Aqsa Parvez Grove we are planting in American Independence Park in Jerusalem, Israel, where the plaque will read: "In Loving Memory of Aqsa Parvez and All Victims of Honor Killings Worldwide."
The memorials in Pelham and Jerusalem are the first indication that in the Free World we are not going to stand by silently while the Islamic world brutalizes women and treats them as worthless trash. They are two small steps toward widespread resistance against honor killing in the West and elsewhere.
Pamela Geller is the editor and publisher of the Atlas Shrugs website and former associate publisher of the New York Observer.
|