Warning: mysqli_free_result() expects parameter 1 to be mysqli_result, bool given in /var/www/html/americanthinker/admin/common/functions/func.general.php on line 126
 The Myth of Ever Increasing Fuel Economy - American Thinker
|

The Myth of Ever Increasing Fuel Economy

Two months ago I did what most environmentalists would consider unthinkable. I purchased my first 4X4 vehicle.

Since I wasn't planning on using it as my primary vehicle, I wasn't willing to shell out the multiple thousands of dollars involved in purchasing new. The logical choice was to pick an early 1990's model which was still in good condition. I found one with electronic fuel injection, A/C, and power everything. Even though it's verging on its twenty year birthday, it is still a sharp looking vehicle in very good condition.
So, imagine my surprise at the responses of my friends and acquaintances.
The comment, "You bought what? What a gas guzzler!" was generally quickly followed up by, "you should have purchased something newer for better gas efficiency."
Does that really make sense? Have vehicles improved so drastically compared to older models? Would I be better off tripping the parking brake on my sweet ride and pushing it over a cliff? While many environmentalists would automatically agree with that sentiment, are the savings actually that significant?
I was nursing a little bit of insecurity about my investment, so I went to the EPA's fuel economy website in order to get some hard numbers. I found something very surprising. When comparing my 1993 4X4 to a current offering with a similar size engine block, transmission and carrying capacity, I found the newer model exceeded my fuel economy by an astonishing: 1 MPG.
"No kidding? Whew, I can live with a loss of 1 MPG. I dodged a bullet there!"
The story doesn't end yet. On May 19, 2009, the AP carried the story of Barack Obama and his new "tougher" fuel economy standards. These new standards would require passenger vehicles to achieve 39 MPG and light trucks, 30 MPG. This would result in an overall fleet average of 35.5 MPG. While the media lovingly touted these new standards as progress, I went back to the numbers.
Knowing what I did about my 4X4, I decided to compare the economy of other typical vehicles through http://www.fueleconomy.gov/. In comparing the numbers, I tried to use similar engine sizes, transmissions and other relevant equipment in order to determine whether the evolution of a vehicle over twenty years improves the fuel economy on any comparable newer model. The results are an eye opener.
Toyota Corolla
Records on this vehicle go all the way back to 1985. Throughout the time frame of 1985-2009, it was offered in front wheel drive and a four speed automatic transmission. The only change came in 1993, when the engine displacement was increased from 1.6L to the current 1.8L. 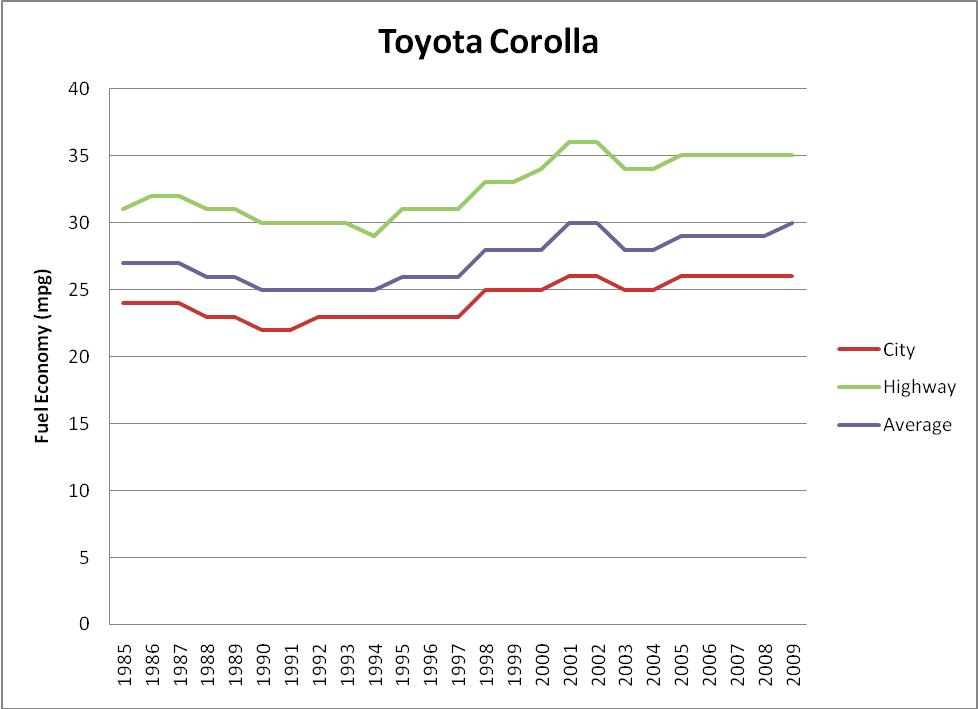 This is interesting isn't it? The trend of the average fuel economy climbs only slightly between 27 to 30 MPG. Maximum highway fuel efficiency peaked in the early 2000's and then fell back around 35 mpg for the remainder of the decade, essentially unchanging for 10 years. Overall, fuel efficiency gain for highway driving increased only about 10%, city had an increase of 8% both over the period of 24 years.  Typically the auto industry redesigns their vehicles every four years or so, therefore this scale represents at least five separate design cycles of the same model.  Since the Corolla is on its 10th generation and this chart started in the middle of the fifth generation, it seems Corolla is reflecting typical industry practice.
Considering this class of vehicle has an emphasis on fuel economy, it seems reasonable to expect significantly larger gains, wouldn't you?
Ford Taurus
This four door sedan was easy to compare model years. During its production run of 1989 to 2007, it was offered with a 3.0L V6 engine, a four speed automatic transmission and front wheel drive. In 2008 the base model engine displacement increased to 3.5L. 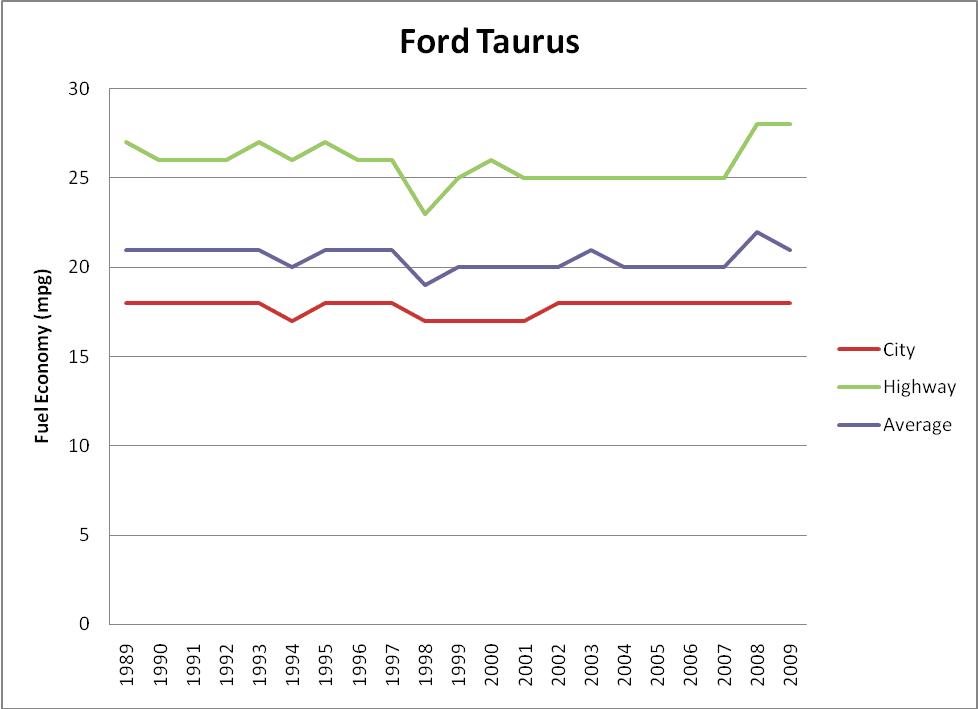 Even considering the multiple design cycles over twenty years (five for Taurus) there is little to no change in fuel economy. It seems reasonable to assume the engine systems were improved over this 20 year cycle. Including all technological improvements between 1989 and the present, the average fuel economy has continually hovered around 21 MPG. With a trend like this, it seems extremely difficult to nearly double the fuel efficiency on a similar platform in only seven short years.
Ford F-150
Looking through the EPA entries, the high output model of this truck has had more configuration changes than the other vehicles. It makes an interesting point. 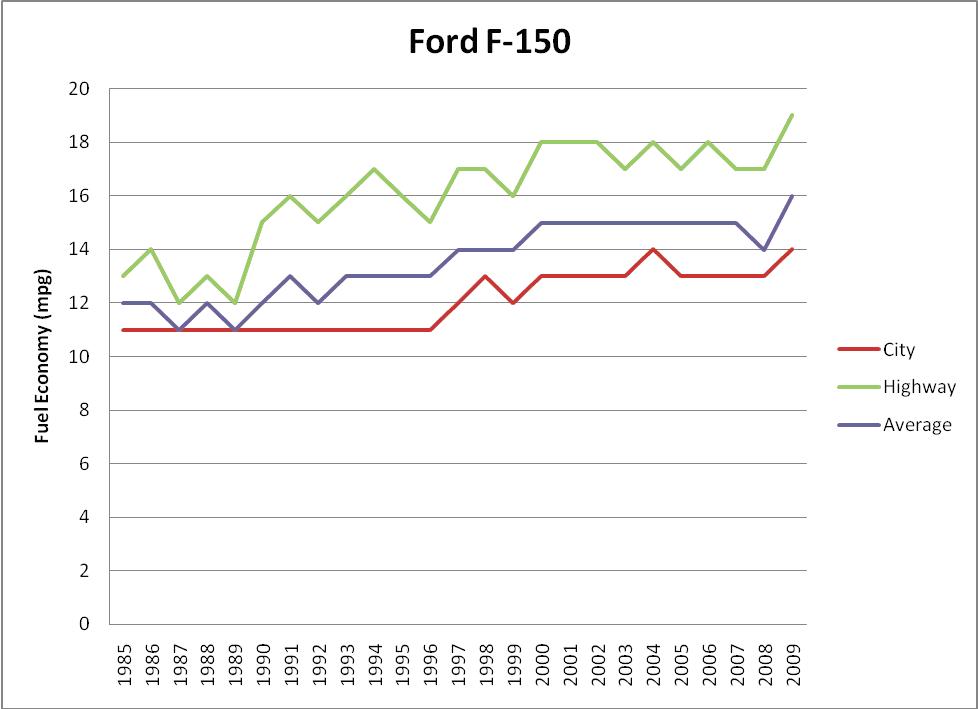 In 1985, the truck was offered with a 5.8L V8 and 3 speed automatic transmission. In 1990 one change was made, the 3 speed was discontinued and replaced with a 4 speed automatic.  In 1997, the engine displacement was reduced to 5.4L and finally for the 2009 year, the engine was again reduced to 4.6L.
Why is this interesting?
Notice at 1990, when the transmission was upgraded, the highway economy jumped. This is to be expected, because higher gears allow the engine to be more efficient at higher speeds. Again, in 1997, you see another slight trend upward with the reduction of the engine size. Yet again, in 2009 there is a slight jump with the reduced engine size.
However, even accounting for the nearly 30% average improvement in fuel economy over 24 years, it seems like the average 30 mpg mark is a long way off. In fact, even though engines cannot be continually refined to ever increasing heights of efficiency, let's assume they do for a moment. Let's also assume this historical data is representative of the trend for this type of vehicle. With these assumptions, if the average economy is 12 mpg in 1985 and 16 mpg in 2009, at the current rate of progress, it would be 2093 before this particular model of light truck would have a fuel efficiency of 30 mpg.
This is not to impugn the automotive industry, if it were possible to design an engine that achieved 200 mpg, I have no doubt they would have succeeded by now. The automotive market is competitive like any other and companies are always trying to maintain an edge on their competition.  Achieving any exponential increase in fuel economy would make them market leaders in a moment. Unfortunately, internal combustion is a mature technology which we understand very well. Because the basic concept has stayed the same for a hundred years, engineers spend their time making minute tweaks in order to achieve gains of one type or another.  These gains are not mutually inclusive. An engine sacrifices power and torque for fuel efficiency or vice versa.
Engineering is the science of making compromises in order to create a product which functions. If an engineer increases the gearing in a transmission, the vehicle gets heavier; at a certain point, increased gearing brings no fuel efficiency benefit thanks to the extra weight. If an engineer decreases engine displacement, efficiency will increase to a point, then decline as the power to weight ratio becomes unfavorable. This will continue right up to the point where the vehicle is unable to move its own weight.
Another option is to reduce the weight of the vehicle to get the gains Obama so desires. Continuing down this path, the automobile quickly becomes a motorcycle.
As many others have pointed out, this results in designs where a vehicle becomes lighter and proportionally less safe as the inertia is decreased.
That's obvious, but not the point.
The point is, since the 1970's fuel economy has become one of the yardsticks by which all vehicles are measured. Arguably, to some it has become the most important. People seem to naturally assume that a new vehicle is going to perform yards above that of its predecessor. Hence, there becomes an expectation that fuel economy can and will always increase. Looking at the plotted fuel economies of the above representative vehicles, this expectation doesn't show true.
We're expecting miracles from a technology which has truly reached its limits. This is unreasonable. For each class of vehicle, the unique characteristics of its mission almost appear to dictate its fuel economy. An economy car isn't comfortable for carrying a family of five and a sedan will never carry a couple yards of topsoil for your garden. The sedan will never rival the economy car in fuel efficiency because it has different requirements it has to meet.  From the buyer's standpoint, within vehicle classes, a 10 year old car is economically the same as a new one.
By proposing a set limit for economy on all classes of passenger vehicles, Barack Obama has basically said one of two things: In 2016, he wants only economy cars to be sold in the US or he is instructing car companies to squeeze gas from a stone. Since he cannot change the laws of physics, I envision the date those proposed standards take effect will either be repealed by the next administration, or continually be delayed.
This is just another dictate similar to all the rest of Obama's plans: not based in reality, but wishful thinking.
Note: Many will note I only compared regular gas vehicles and did not include hybrids and alternative fuel vehicles in the mix. Neither type of vehicle has enough fuel efficiency history to establish a trend. At most, the oldest models of hybrid vehicle are currently on their second design iteration and alternative fuels have not yet been shown to be viable. Regardless, there is no reason for me to believe that any of these variations on the internal combustion engine are immune to the same constraints that govern modern automotive design.
|