Dr. Michael Oren is being touted as Israel's next ambassador to the U.S. He's taking a number of hits in the press. Some people have said he's too conservative, others that he's too liberal. He is undeniably one of the world's foremost historians on the Middle East. That is, admittedly, his day job, not mine. I'm a writer.

I have a play called "Irena's Vow" running on Broadway. So what qualifies me to comment in any way on the man who may be Israel's next ambassador to the United States? Doctor Oren, in addition to his other achievements, is also a major in the same reserve unit in the IDF in which I serve as a captain. I can tell you a bit about the man. I have served in two wars with him.
One night in the 2006 Hezbollah /Israel War Michael and I were serving as public affairs officers. We were up at the Lebanese border late at night when another officer came up and approached us and four or five others.
What most people don't realize is that for the first few weeks of that war Israel actually had fewer troops on the ground than Hezbollah. They quite literally outnumbered Israeli forces on the ground until the last few days of the war. A battle had been raging and Israel had taken casualties. They were looking for volunteers to go into Lebanon as a covering party and hook up with several ambulances that were evacuating wounded. They couldn't land a chopper because it was right in the heart of Hezbollah strongholds and they would have been shot out of the sky by anti air craft missiles.
Without saying a word Michael was the first to pick up his gear and volunteer.
We were a half dozen middle aged reserve officers. We didn't have an ar 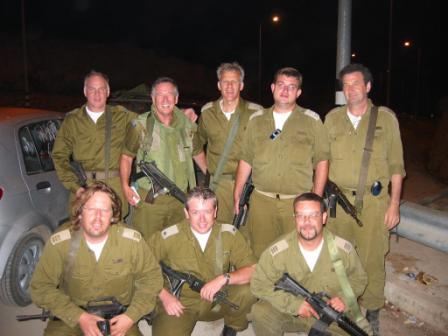 mored vehicle, so we actually went into Lebanon in my Avis rent a car. After looking for the ambulance for what seemed like hours we realized there was a screw up in co-ordinates and we were sitting ducks in a rent a car in Lebanon.
We headed back into Israel and waited at the border crossing for word on where the ambulances were. After a while the same officer found us and acknowledged that there had been a screw up in co-ordinates. Now there was another problem.

There was an ambulance with four dead Israeli soldiers that needed a covering party to go in for their evacuation. Again it was too dangerous for helicopters to land. Again they were asking for volunteers. Again Michael was the first to pick up his gear and volunteer.
My son had been killed at the age of twenty two in a horrific car accident. Michael's son had been wounded in action in a fire fight with terrorists. To all of us middle aged men these fallen boys could have been our sons. We went back into Lebanon in the rent a car.
We hooked up with the ambulance in a wadi or deep ravine. Flairs were going off above us, which meant that Hezb'allah knew we were there and were hunting for us. We served as the covering force while the fallen were evacuated. Later Michael's daughter, who was serving as a social worker in the Golani Brigade, called Michael on his cell phone. Her unit had taken a lot of wounded; most of them were her friends.
Michael turned to me and said, "My daughter needs a hug. Can I borrow your car?" The two of us drove down from the Lebanese border to Rambam Hospital in Haifa. Michael spent a half hour with his daughter; gave her a much needed hug and then the two of us drove back near dawn to rejoin our unit.
That is the kind of man Israel's ambassador designate to the U.S. is. He wouldn't hesitate to endanger his life not only to recover wounded, but to recover the fallen, and though exhausted himself, drove round trip, four hours to give his daughter a hug when she most needed her father's love.
There are other people who can amply describe Doctor Oren's experience in diplomacy. He has served a number of Prime Ministers and is a fellow at the Shalem Center in Jerusalem, which contains such luminaries as Nathan Shiransky and Lieutenant General (Res.) Moshe Ya'Alon.
I, on the other, hand can tell you about the man. Both Israel and the U.S. would be lucky to have Doctor Michael Oren serving in Washington.
Dan Gordon Captain (Res.) IDF
|