To many who have watched the transition from socialism to fascism at close quarters the connection between the two systems has become increasingly obvious, but in the (Western) democracies the majority of people still believe that socialism and freedom can be combined. They do not realize that democratic socialism, the great utopia of the last few generations, is not only unachievable, but that to strive for it produces something utterly different - the very destruction of freedom itself. As has been aptly said: ‘What has always made the state a hell on earth has been precisely that man has tried to make it his heaven.' - F.A. Hayek, The Road to Serfdom1

Friedrich Hayek was an Austrian economist, philosopher and intellectual considered to be one of the most important economists and political philosophers of the twentieth century. He shared the 1974 Nobel Prize in Economics for his pioneering work in the theory of money and economic fluctuations.2 Hayek's work has influenced world leaders for decades. However, at this present time in our history, it is more important than ever to remind the public about the lessons and logic he had to offer. Revisiting Hayek's work informs us of how the dramatic actions being taken by the current administration will lead us down a road that ultimately ends in the destruction of this democracy along with the freedoms and liberties we take for granted.
Hayek's central thesis in his sentinel work, The Road to Serfdom, is that through the inevitable mismanagement of resources and goods at the disposal of the state, all forms of collectivism lead eventually to tyranny. Hayek used the Soviet Union and Nazi Germany as examples of countries that had progressed through the phases of collectivist governments and reached the point of tyranny. Hayek argued that disagreement regarding the practical implementation of any economic plan combined with the inadequacy of the planners' resource management would necessitate coercion in order for anything to be achieved. According to Hayek, the failure of central planning would be perceived by some in the public as an absence of sufficient power by the state to implement an otherwise good idea. This would lead the public to vote more power to the state, assisting in the rise of a "strong man" perceived to be capable of getting the job done. Following these developments, a country will be driven into outright totalitarianism. For Hayek, this journey, inadvertently set upon by central planning, ends in the destruction of all individual economic and personal freedoms.3
President Obama laid out his historic budget proposal in a manuscript entitled A New Era of Responsibility -- Renewing America's Promise. Unfortunately, his budget proposal is anything but responsible and broadly expands on plans by his predecessors which have already set us down "the road to serfdom." The growth rate of government spending for entitlement programs has increased 110% faster than that of the economy over the last two decades (figure 1).4,5 Entitlement programs or transfer payments to individuals currently account for 70% of total government spending.6
Figure 1. Growth in total government transfers to individuals vs. GDP growth 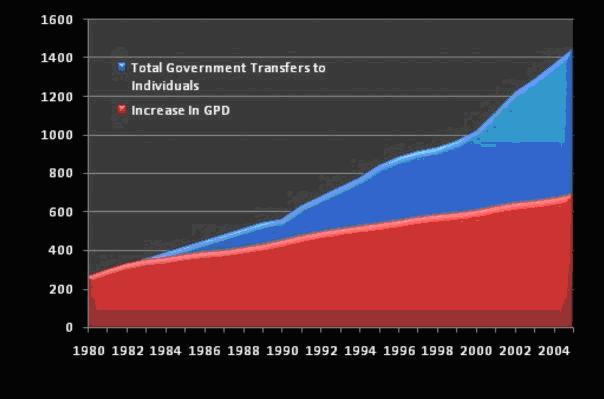 Still the President and his team try to sell the American people on the argument that the government hasn't done enough - it hasn't done enough to protect and expand the power of labor unions, to provide ALL Americans with healthcare, a college education, a comfortable retirement, security for individuals against unsustainable mortgage and credit card debt, security from risky investments, security for banks and businesses against irresponsible spending and lending, and finally security against climate change. According to the logic of the administration, more government spending is required to return America to prosperity.
This assertion begs one critical question, is there any proof that more government spending promised in the Obama budget proposal will lead to economic growth and prosperity? The answer is NO; the data suggest that more government spending will result in exactly the opposite of what the new administration is promising.  A recent study from the Institute for Market Economics in Bulgaria, using economic data from a broad spectrum of countries, concludes with 95% probability, that the optimum size of government is less than 25% of gross domestic product (GDP) - government spending beyond this level is counterproductive.7
Optimum government theory suggests that government spending up to a certain point optimizes economic growth and prosperity through infrastructure development, the provision of a national defense and the provision of a monetary system. However, beyond this, government is a hindrance on the economy because it requires a transfer of wealth from the private sector to the public sector, which is less efficient and does not operate under the same incentives as the private market.
Keeping in mind the theory that the optimum size of government is less than 25% of GDP, consider that in 2008, US total government spending equaled $5,237.1 trillion or 36% of GDP.8 This would suggest that we were already spending well beyond the "optimum level" and further spending increases will decrease economic growth and prosperity. Unfortunately, in 2009, US total government spending will be equivalent to 43% of GDP!
To illustrate optimum government theory, we charted GDP per capita versus government spending and total tax revenue as a percent of GDP for the US and four of its closest competitors for the year 2008. (figure 2)4,9-12 The chart produced by this exercise was consistent with the results from the Institute for Market Economics and demonstrates that further increases in US government spending will decrease prosperity.
Figure 2. GDP Per Capita (GDP PC) vs. Gov Spending as % of GDP (GS/GDP) and Tax Revenue as % of GDP (TR/GDP) 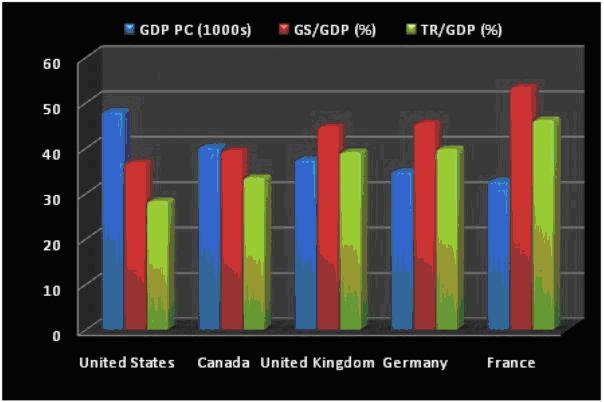 There is a clear inverse relationship between government spending and prosperity, represented by GDP per capita - as government spending and tax revenue increase beyond an "optimum" level, GDP per capita declines. Therefore, we should conclude that the administrations aggressive budget proposal, which increases the current size of government, will achieve two outcomes: one, increase government spending and entitlement programs and two, decrease potential prosperity. This diminished prosperity will come at the expense of new job creation, research and development, new technologies, products, medicines, etc.; all of which create wealth and better serve both the individual and society.
Hayek recognized the threat from the inevitable expansion of government spending and entitlement programs and wrote in his famous work, The Constitution of Liberty, "It has been well said that, while we used to suffer from social evils, we now suffer from the remedies for them. The difference is that, while in former times the social evils were gradually disappearing with the growth of wealth, the remedies we have introduced are beginning to threaten the continuance of that growth of wealth on which all future improvement depends."13
How can a government continue to promise more while its actions are simultaneously decreasing economic output? The answer in the short-term is obvious; it will raise taxes and borrow money by the issuance of debt through treasury bonds. Consider that the President's budget outlined in A New Era of Responsibility increases the debt held by the public from $5.8 Trillion in 2008 to an estimated $15.4 Trillion in 11 years.4,14-15 (Figure 3)
Figure 3. Debt held by the public (in trillions) based on the President's budget proposal 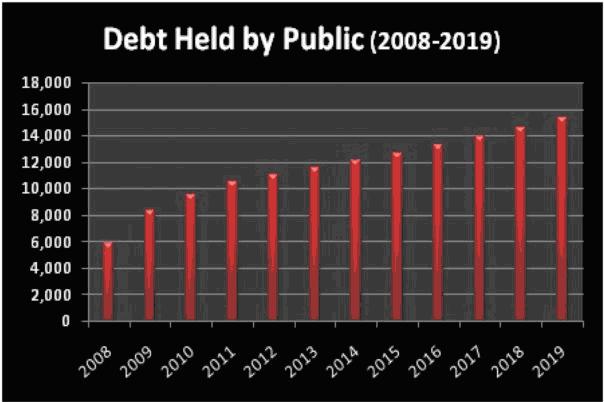 According to the non-partisan Congressional Budget Office (CBO) the cumulative deficit from 2010 to 2019 under the President's proposals would total $9.3 trillion, compared with a cumulative deficit of $4.4 trillion projected under the current-law assumptions embodied in CBO's baseline. Debt held by the public would rise, from 41 percent of GDP in 2008 to 57 percent in 2009 and then to 82 percent of GDP by 2019 (compared with 56 percent of GDP in that year under baseline assumptions).15 In 2008, the interest owed on the debt was $243.9 Billion or $1574 for every worker each year.4 In 2019, every worker in the U.S. will owe $4,155 every year just to pay the interest on the public dept.3 The current administration is making a bad situation much worse. Regarding debt accumulation resulting from entitlement spending, Hayek warned, "... democracy will have to learn that it must pay for its own follies and that it cannot draw unlimited checks on the future to solve its present problems."13
Unfortunately the irresponsible spending put forth in the President's budget can't last forever. The current administration can promise and pass legislation to address whatever it feels people need or want, but it can't fulfill those promises indefinitely. The President's plan is unsustainable, much more so than his predecessors. At some point, the government will NOT be able to fulfill its obligations and the public will vote more power to the state to fulfill these obligations and implement the ideas it has promised. This cycle inevitably leads to tyranny as Hayek warned over 60 years ago. It is NOT the road to long-term growth and prosperity that is paved with government spending and debt but rather the road to serfdom!
Though we may have speeded up a little the conquest of want, disease, ignorance, squalor, and idleness, we may in the future do even worse in that struggle when the chief dangers will come from inflation, paralyzing taxation, coercive labor unions, and ever increasing dominance of government in education, and a social service bureaucracy with far-reaching arbitrary powers - dangers from which the individual cannot escape by his own efforts and which the momentum of the overextended machinery of government is likely to increase rather than mitigate. - F.A. Hayek, The Constitution of Liberty13
References
1. Hayek FA. The Road to Serfdom. United Kingdom: Routledge Press, 1944.
2. http://en.wikipedia.org/wiki/Friedrich_Hayek Accessed 4/28/09
3. http://en.wikipedia.org/wiki/The_Road_to_Serfdom Accessed 4/28/09
4. Stransky B, Foy A. The Young Conservatives Field Guide. 2009. In press
5. "Statistical Abstract of the United States: 2008," US Dept of Commerce, Economics and Statistics Administration, Table 522, pg 346, "Government Transfer of Payments to individuals - Summary: 1980-2005"
6. "Outlays by Function and Subfunction, 1962-2013," GPO Access, http://www.gpoaccess.gov/usbudget/fy09/hist.html, accessed 3/14/09
7. http://ime.bg/en/articles/the-alternative-budget-of-ime/, accessed 4/28/09
8. http://www.usgovernmentspending.com/, accessed 4/28/09
9. CIA World Fact Book, https://www.cia.gov/library/publications/the-world-factbook/, accessed 3/10/09
10. OECD, Member Country Data, http://www.oecd.org/countrieslist/0,3351,en_33873108_33844430 _1_1_1_1_1,00.html, accessed 3/10/09
11. http://en.wikipedia.org/wiki/List_of_countries_by_GDP_%28PPP%29_per_capita. Accessed 3/1/09
12. http://knol.google.com/k/alexander-emilfaro/government-spending-and-tax-revenue-as/kpxsjkpzgwux/8, accessed 3/1/09
13. Hayek FA. The Constitution of Liberty. United States: The University of Chicago Press, 1960.
14. "A New Era of Responsibility, Renewing America's Promise," Office of Management and Budget, 2010 Budget, http://www.gpoaccess.gov/usbudget/fy10/pdf/fy10-newera.pdf, accessed 3/14/09
15. "Outlays by Function and Sub function, 1962-2013," GPO Access, http://www.gpoaccess.gov/usbudget/fy09/hist.html, accessed 3/14/09
16. A Preliminary Analysis of the President's Budget and an Update of CBO's Budget and Economic Outlook. http://www.cbo.gov/ftpdocs/100xx/doc10014/03-20-PresidentBudget.pdf, accessed 4/28/09
|