Warning: mysqli_free_result() expects parameter 1 to be mysqli_result, bool given in /var/www/html/americanthinker/admin/common/functions/func.general.php on line 126
 Geithner's Radioactive Record at the Fed - American Thinker
|

Geithner's Radioactive Record at the Fed

By Christopher J. Alleva
Last week, Treasury Secretary Tim Geithner admitted the Fed failed miserably during his tenure as New York Fed president, and contributed mightily to the financial calamity the world is digging out from under.  Geithner conceded massive policy errors in the U.S. and at central banks throughout the world. To sum it up, Geithner confessed that worldwide monetary policy was too loose too long creating a huge bubble in asset prices. Basically, there was too much money chasing investments. Like flood waters, money seeks ever higher returns, pushing prices of real estate and commodities at rates exceeding 15% annually in 2004 and 2005.

Residential real estate underpins the economy. It is the hard collateral that secures the world's financial system. Incredibly, no objections were raised to Geithner's confirmation based on his abject failure as New York Fed president. Instead, he was confirmed mostly along party lines in January 2009. The Washington liberal establishment insisted  Geithner was indispensable in handling the financial fiasco.

Now Geithner has admitted responsibility for grave policy errors that are arguably the single largest contributor to the world-wide recession. Geithner, along with current and former Fed Chairmen, Ben Bernanke and Alan Greenspan, are probably the most culpable actors in this crisis. Given the vast resources at their disposal, there is simply no excuse for it. They ought to be politically radioactive.

The Federal Reserve Banks employ armies of analysts and economists. They monitor the economy by tracking money flowing through member banks as well as data from other central banks, agencies, and regulators. This data is then packaged and presented to the money policy makers on the Federal Open Market Committee ("FOMC") that includes first among equals, the Fed Chairman and the New York Fed President. Based on these reports they loosen and tighten the money supply using the "Fed Funds rate", raising rates to tighten and lowering rates to loosen.

In 2003, the FOMC set the Fed Funds rate at 1%, an historic low and an anomaly not seen since the 90s when Japanese central bank set the stage for the "lost decade" miring Japan in a near 10 year recession.

This loose money policy coupled with more liberal home loan qualification standards imposed by Congress led to an unprecedented run up in home prices. Illustrating the Fed's failure is this graph showing the national median housing price ratio to the median annual income. For more than twenty years, this ratio moved in a narrow range between  2.9 and 3.1. This range held through several recessions, wars and expansions. Beginning In 2001, the ratio climbed to 3.3, peaking in 2006 at 4.6. This can only be described as a stunning increase for this long used indicator of housing affordability. 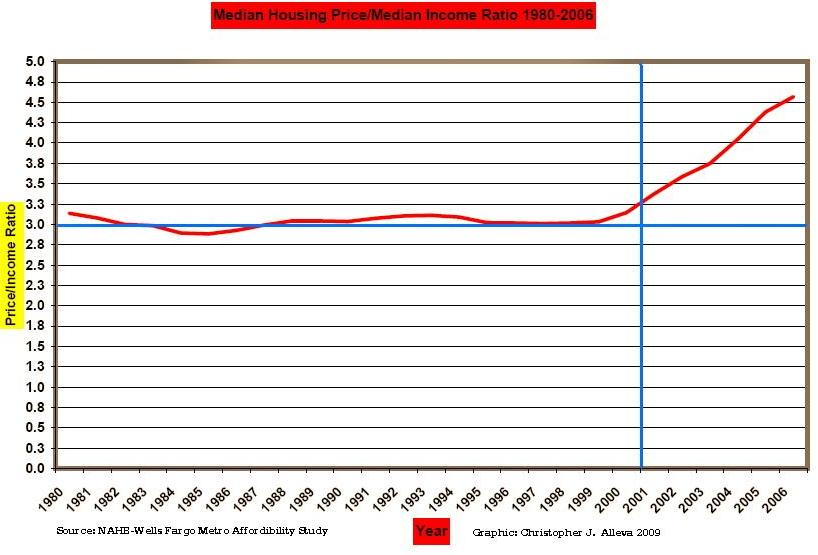 The Fed has all this data and much more. The huge jump in this indicator should have triggered alarm bells aplenty. Apparently Geithner, Bernanke and Greenspan were asleep at the switch. The price/income ratio is a highly reliable indicator of housing price stability. At the end of the day home prices are tied to incomes and employment growth. Unlike the flimsy numbers bandied about by the global warming crowd, this number and its behavior over this multi-decade period is close to bullet proof. The fact that this ratio had such a narrow range over a long period and then spikes dramatically  beginning in 2001 makes it even more meaningful.
And this wasn't enough, sub-markets with historically weak income and job growth like Baltimore and Philadelphia experienced unusual spikes in their ratios that track closely the national numbers. The ratio nearly doubled in Philadelphia from 2004 to 2006.

In the many discussions of what went wrong, the Fed money policy that led up to this downturn has been largely overlooked. Sadly, our elected representatives that have  oversight responsibility for the Fed lack the competence to conduct this review. Ordinarily, I am hesitant to call for special commissions, but given the gravity of this situation, it may be advisable.
|