Warning: mysqli_free_result() expects parameter 1 to be mysqli_result, bool given in /var/www/html/americanthinker/admin/common/functions/func.general.php on line 126
 Obama doubles down on the bow to the Saudi King - American Thinker
|

Obama doubles down on the bow to the Saudi King

The White House is denying that President Obama bowed before the Saudi King, committing a major mistake. Ben Smith of Politico reports:

"It wasn't a bow. He grasped his hand with two hands, and he's taller than King Abdullah," said an Obama aide, who spoke on the condition of anonymity.

Michael Goldfarb summed up the problem for Obama succinctly in the Weekly Standard:

So who you going to believe -- Barack Obama or your lying eyes?

The story is officially "in play" now that the White House has spoken, albeit from an anonymous source. American citizens are implicitly asked to view the demi-prostration and decide for themselves. The evidence simply does not support the official position of the Obama administration.
Here is a 13 second clip of the bow:

Please note the following two freeze frames, which expose the White House spokesman as a liar: 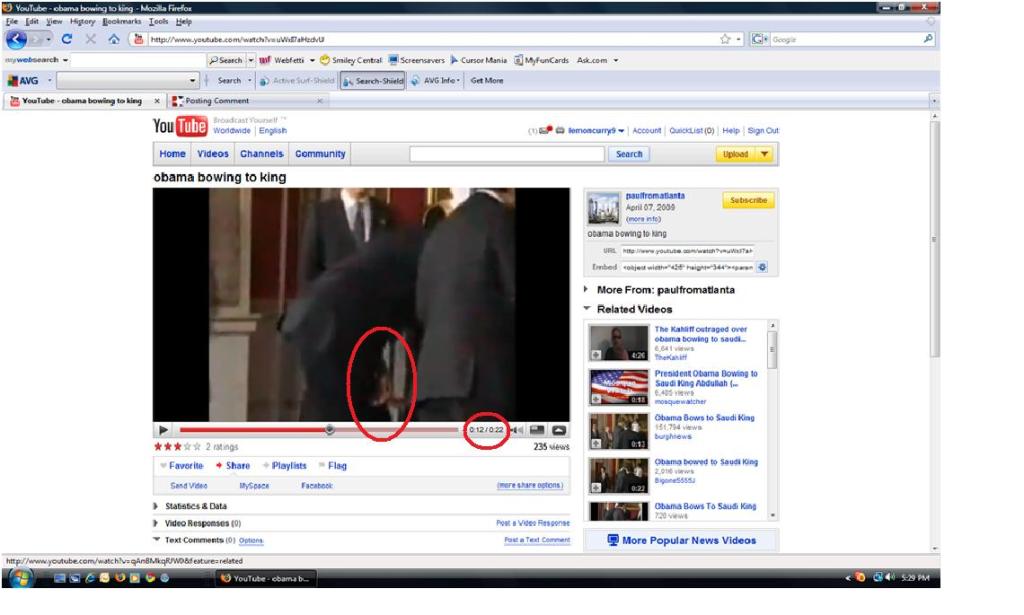 Another freeze frame, also showing that the President was not performing a two-handed handshake 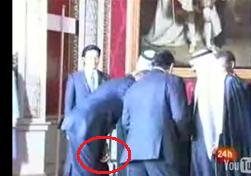 So why would the White House lie, instead of just admitting that the President made a gaffe? Well, for one thing, history teaches us that bows between official representatives of nations are a rather serious matter.

We live in an age of a Clash of Civilizations (in Samuel Huntington's words), with many in the Islamic world convinced that Western Civilization, ascendant for the last few centuries, is about to be humbled by Islam, the once and future dominant force in the world. No Caliph exists today as head of the entire Islamic world, but the number two slot is amply occupied by King Abdullah, as guardian of Mecca and Medina, Islam's two holiest cities.
Over three hundred years ago, another world civilization accustomed to being the largest and richest on earth, faced a challenge which turned into a clash, which turned into a fall. China, the Middle Kingdom, unquestioned as the dominant nation of East Asia, came into regular contact with the Western nations. At the time, the only pattern of diplomatic relations recognized by the Son of Heaven (China's emperor) and his court was that of tributary emissaries to the Middle Kingdom. Japan, Korea, Vietnam, and the other nations of East Asia understood and accepted that China was dominant, and when their representatives came to Beijing, they performed the required prostration acknowledging their (and their rulers') subordinate place in the pecking order. They also brought "gifts" to the Son of Heaven, and were sent home with "gifts" from the Imperial Court, amounting to trade, disguised as nothing so crass as commerce, but rather as a sign of supplication from them and benevolence from the Emperor.
In plain English, if you wanted to be received and recognized as legitimate at the Imperial Court, you had better bow down before the Emperor in a kow tow (叩頭), prostrating oneself before the glorious ruler, and touching the head to the floor.
This was not an idle matter of protocol, and everyone knew it, especially the emissaries of European rulers who made their way to Beijing, in search of trade relations: tea, silk, porcelain, and other products of China that were of finer quality than anything available elsewhere.
One of the most famous incidents in China's history of contact with the West occurred in 1793, when the Earl of Macartney came to Beijing as an emissary of the King of England, carried to Tientsin (the port city for Beijing) on a warship. The Chinese officials deemed the presents he brought to the Emperor from King George III as "tribute", putting the Macartney mission in the context of traditional tribute relations.
But when it came to the kow tow, Macartney refused. In the words of the acknowledged dean of American China historians, the late John K. Fairbank of Harvard,

[Court officials] urged Macartney to practice the performance of the kowtow. This he stoutly refused to do, and he only went down on one knee before the Chien-lung [the Emperor], as he would have done to his own sovereign. The emperor issued an edict commending King George III for his "respectful spirit of submission" but pointing out that "our celestial empire possesses all things in prolific abundance"...

Interestingly, a columnist in the Saudi-backed Arabic paper Asharq Alawsat also took the gesture as a bow and appreciated the move.
"Obama wished to demonstrate his respect and appreciation of the personality of King Abdullah Bin Abdulaziz, who has made one of the most important calls in the modern era, namely the call for inter-faith and inter-cultural dialogue to defuse the hatred, conflict and wars," wrote the columnist, Muhammah Diyab.

Alas for the Son of Heaven and his nation, the Opium War followed a few years after the demi-prostration of the  British envoy, and it was established that China was subordinate to the cannons, guns, and warships of the Western powers, who proceeded to help themselves to China's wealth, sending opium [over China's feeble objections] in return for what they desired.
President Obama voluntarily bent his knee and bowed his head before the most important ruler in the Islamic world. Let us hope that it does not require a war to right this insult to American sovereignty.
Thomas Lifson is editor and publisher of American Thinker. He has taught courses on East Asia at Harvard and Columbia Universities.
|