Warning: mysqli_free_result() expects parameter 1 to be mysqli_result, bool given in /var/www/html/americanthinker/admin/common/functions/func.general.php on line 126
 Not Something We Do? - American Thinker
|

Not Something We Do?

The Tax Day Tea Parties may have been a surprise to some conservatives, but the groundwell is very real.

A few months ago, as bailouts were booming and budgets were busting, I wondered how long it would take for conservatives to actively respond.  Outside of the world of talk radio and opinion columns, I felt the American public needed a voice, a venue, and a vindication for the debt-multiplying and partisan-flaunting policies imposed upon us by our new president.  To my dismay, however, my questions were largely ignored.
As one conservative colleague told me, protesting is "not something we do."
But yesterday I was never so happy to see a conservative proven wrong.
At the Tax Day Tea Party in Phoenix, thousands of protesters congregated on the lawn of the State Capitol.  And as the event kicked off, humor played an important role in setting an energetic tone.  Former Arizona Congressman J.D. Hayworth announced, "It's strange to see this many employed protesters."  Noting the 5:30 p.m. start, one sign read, "I protest at night because I work during the day!"  A mock teleprompter garnered laughs, as did a sign that read, "See what happens when you give a Junior Senator a credit card!"
But while smiles were on the mouths of Phoenix residents Wednesday night, frustration was in their eyes.
Their purposes varied, but their passions shone brightly.  Many were outraged at the excessive spending on government programs, some detested the bank and business bailouts, and others simply proclaimed their love for liberty.
A concern for our nation's children also weighed heavily for many in the crowd.  "I'm here for my children," a man with three young ones told me.  "They don't deserve to be in debt from the failure of others.  I work hard to provide for them, not to provide for the government's mistakes."
One small boy held a sign that read, "I'm only ten years old and already in financial ruin." 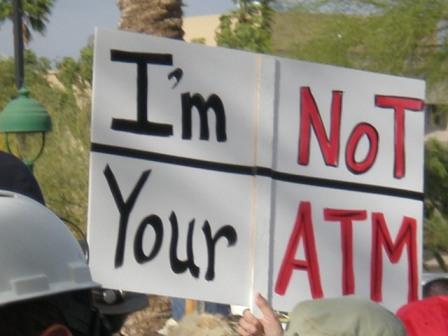 Another one read, "Obama gives his kids a puppy and gives my kids debt."
But among the many messages supported at the rally, one common theme seemed to prevail.  The protesters of Phoenix are tired of the stupor of our leaders regarding the disintegration of personal responsibility.  President Obama and Nancy Pelosi cannot comprehend that people actually exist in this country that prefer to take care of themselves.  There are actually Americans that believe in earning a keep and keeping what is earned.  There are even Americans that -- gasp! -- enjoy helping each other without government assistance.
And those that do believe in these crazy ideals are labeled as freaks by the media.  And even worse by our own government.
The crowd's disgust was palpable concerning this week's Department of Homeland Security report that warned of the "right-wing extremism" of veterans, border advocates, tax protesters, and small government conservatives.  During his turn at the mic, conservative talk show host Barry Young asked, "Anybody here go to church?  Anybody pro-life?"  Upon hearing enthusiastic cheers, he replied, "Boy, we've got a fierce set of extremists out here!"  With a more serious reaction, one man I spoke to, a serviceman of our country for 33 years, sadly commented, "I went to bed a veteran and somehow woke up a terrorist."
The painful irony of the DHS statement is that it is Arizona's own ex-governor, Janet Napolitano, heads the department that released the malicious statement.  And to add insult to injury, Napolitano's replacement, Republican Jan Brewer, is planning on raising local taxes on Arizona residents.  Phoenix had a lot to be angry about Wednesday.
"We're not protesting taxes," one woman told me.  "We're protesting the irresponsibility of individuals, businesses, and our government."  "Free markets -- not free loaders" was a common message on posters.  The recent actions of the government are like a punch in the face of hardworking Americans who take pride in self-reliance.
And it is the commonness and simplicity in the lifestyle and attitude of these Americans that is 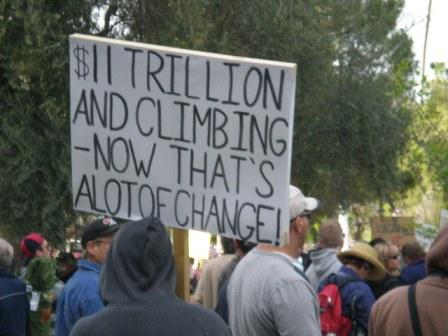 truly inspiring.  It is the average independence that New York City and San Francisco do not understand.  It is the heartbeat of personal pride that not only drives these citizens today, but has driven citizens since the formation of our republic.
The beauty of today was found under hard hats and cowboy hats, in work boots and flip flops, on the experienced faces of grandfathers and the innocent cheeks of children.  Some were draped in flags, a few wore colonial garb.  But no hint of violence was found amidst the multitudes.  No broken windows, no fires, no outrageous demonstrations.  Civil voices with a vigorous message.  Respectful protest with a passionate vision.
I saw mechanics and firemen, teachers and businessmen, long-bearded bikers and short-haired Marines all standing side by side with a united goal.  All ages and all races together.  The future of our nation is tenuous on a number of fronts, but today's protesters showed they are ready for the next step.  "Is it 2012 yet?" read one sign.  "The next election starts today," read another.
But I still needed to know if conservatives should start adding "protester" to their long list of honorable qualities.  One grandmother had this to say:  "We aren't angry people who normally protest things.  But when the government gets out of hand, our anger will definitely be heard.  We may not protest on every issue like a lot of liberals, but to assume we'll never protest is crazy.  Today proves that."
A nearby sign echoed that sentiment: "First time protester, long time taxpayer.  Enough is enough."
We may not have much practice at this protesting stuff, but it appears we do it pretty well.
|