The New York Times guidelines for staff writers on "Journalistic Ethics" begin by stating the principles that all journalists should respect: impartiality and neutrality; integrity; and avoidance of conflicts of interest. Andrew Revkin's front-page article on Friday, 24 April, 2009, falsely alleging that a coalition of energy corporations had for many years acted like tobacco corporations, misrepresenting advice from its own scientists about the supposed threat of "global warming", offends grievously against all of these principles.
The article says -

"For more than a decade the Global Climate Coalition, a group representing industries with profits tied to fossil fuels, led an aggressive lobbying and public relations campaign against the idea that emissions of heat-trapping gases could lead to global warming.
"The coalition was financed by fees from large corporations and trade groups representing the oil, coal and auto industries, among others. In 1997, the year an international climate agreement that came to be known as the Kyoto Protocol was negotiated, its budget totaled $1.68 million, according to tax records obtained by environmental groups.
"Environmentalists have long maintained that industry knew early on that the scientific evidence supported a human influence on rising temperatures, but that the evidence was ignored for the sake of companies' fight against curbs on greenhouse gas emissions."

Revkin compares two statements by the coalition of industrial interests, which are also illustrated by a pair of ragouts accompanying his article -
Public statement by the coalition, made in the early 1990s:

"‘The role of greenhouse gases in climate change is not well understood,' the coalition said in a scientific ‘backgrounder' provided to lawmakers and journalists through the early 1990s, adding that ‘scientists differ' on the issue.

Private advice from the coalition's own scientists, 1995 (after the coalition had made the public statement that Revkin said conflicted with the scientists' advice):

"‘The scientific basis for the Greenhouse Effect and the potential impact of human emissions of greenhouse gases such as CO2 on climate is well established and cannot be denied,' the experts wrote in an internal report compiled for the coalition in 1995."

"The Public Message: Climate Uncertainty
"In the early 1990s, the Global Climate Coalition was the leading voice for industries concerned that a prompt push to cut heat-trapping emissions could raise energy costs. It produced a series of "backgrounders" available to the press and policymakers. This flier appears to contradict what the coalition's science and technology advisers were saying about the basic science pointing to substantial warming from a buildup of such gases."

On Capitol Hill on the day Revkin's article was published, I watched Vice-President Al Gore give testimony before the Energy & Commerce Committee of the House of Representatives, during which he said -

"The largest corporate carbon polluters in America, 14 years ago, asked their own people to conduct a review of all of this science. And their own people told them, ‘What the international scientific community is saying is correct, there is no legitimate basis for denying it.'
"Then these large polluters committed a massive fraud far larger than Bernie Madoff's fraud. They are the Bernie Madoffs of global warming. They ordered the censoring and removal of the scientific review that they themselves conducted, and like Bernie Madoff, they lied to the people who trusted them in order to make money.", etc., etc.

However, Revkin's quotation from the coalition's scientists' document of 1995 is incomplete. By removing the majority of the paragraph quoted, Revkin fundamentally alters the purport of what the coalition's scientists were saying. Had Revkin quoted the entire paragraph, he would have had no story. The full paragraph, with the substantial passage omitted by Revkin in bold face, reads -

"The scientific basis for the Greenhouse Effect and the potential for a human impact on climate is based on well-established scientific fact, and should not be denied. While, in theory, human activities have the potential to result in net cooling, a concern about 25 years ago, the current balance between greenhouse gas emissions and the emissions of particulates and particulate-formers is such that essentially all of today's concern is about net warming. However, as will be discussed below, it is still not possible to accurately predict the magnitude (if any), timing or impact of climate change as a result of the increase in greenhouse gas concentrations. Also, because of the complex, possibly chaotic, nature of the climate system, it may never be possible to accurately predict future climate or to estimate the impact of increased greenhouse gas concentrations."

In short, the uncertainty is not about whether CO2 can cause "global warming", but about how much warming it can cause - a distinction that Revkin seldom draws as clearly as he should, though I have done my best to explain it to him.
Indeed, it is not clear to me that Revkin has ever reported the significance of the fact that for almost seven and a half years, since late in 2001, there has been rapid global cooling, rather undermining the notion that anthropogenic emissions of CO2 are the dominant driver of the climate and powerfully suggesting that official estimates of its effect on temperature are exaggerated - 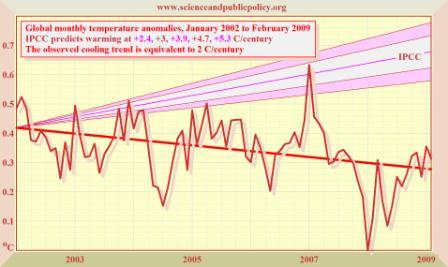 The arithmetic mean of the Hadley and NCDC (terrestrial surface) and RSS and UAH (satellite lower-troposphere) temperature anomalies shows global temperature falling at a rate equivalent to 2 C°/century for more than seven years. The IPCC's predicted path for global temperatures is shown by way of comparison. Source: Science and Public Policy Institute's Monthly CO2 Report for March 2009.
Standing the foregoing, I should be grateful if you would initiate a disciplinary enquiry into Revkin's conduct, to address the following serious questions -
I should be grateful if you would write immediately to reassure me that you will be conducting a disciplinary investigation to ascertain the answers to these four surely pertinent questions. I should also be grateful if, in due course, you would advise me of the outcome of your investigation.
Underlying the four questions about Revkin's conduct that I have set forth above is a fundamental question about the New York Times' impartiality and neutrality, integrity, and avoidance of conflicts of interest. Do you think that the New York Times, in its coverage of the "global warming" scare, has given as much coverage as it should have done to the very large and rapidly-growing number of serious scientists in climate and related fields who consider the imagined threat of anthropogenic "global warming" to be imaginary? If not, do you have the power, and the inclination, to ensure that in future the "global warming" issue will be reported in a more impartial, neutral fashion in the New York Times?
Yours truly,
VISCOUNT MONCKTON OF BRENCHLEY 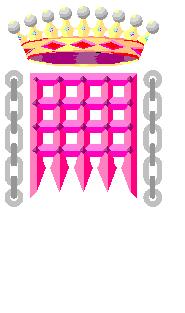