Warning: mysqli_free_result() expects parameter 1 to be mysqli_result, bool given in /var/www/html/americanthinker/admin/common/functions/func.general.php on line 126
 The O is for Overrated - American Thinker
|

The O is for Overrated

In his campaign for the Presidency, candidate Barack Obama and his minions relied on several key messages:

Experience, and in particular executive experience, was not much discussed, since Obama had less of both than any candidate for President in history.  And Obama also ran from his public voting record and history of associations (Reverend Wright, Bill Ayers, Rashid Khalidi, Tony Rezko) that suggested he would be far more to the left than any President in history. Rather the message was that he would be bi-partisan, moderate, and post-racial.
We have now seen the President and his team in action, and the lack of executive experience seems to be a real drawback. The fiasco with British Prime Minister Brown's visit may reflect more than the President's fatigue after going through all those papers on his desk.  The Administration's vetting process for high level positions was weak and many posts remain unfilled, especially at Treasury, arguably the most critical Cabinet Department at the moment.
Investors remain baffled as to how the Administration plans to address the banking industry.  The President's prior voting record (the most liberal of any Senator's) seems to have been a reliable guide as to how far left the President wants to move the country (as Rahm Emanuel has said: a crisis is a terrible thing to waste, and in fact offers an opportunity.)   On the other hand, Obama remains unflappable, at least on camera.
In one area, Obama as the great communicator, a little bit of the glow is gone. For it turns out that while there is only one  O in teleprompter,  without this trusted device,  we might not 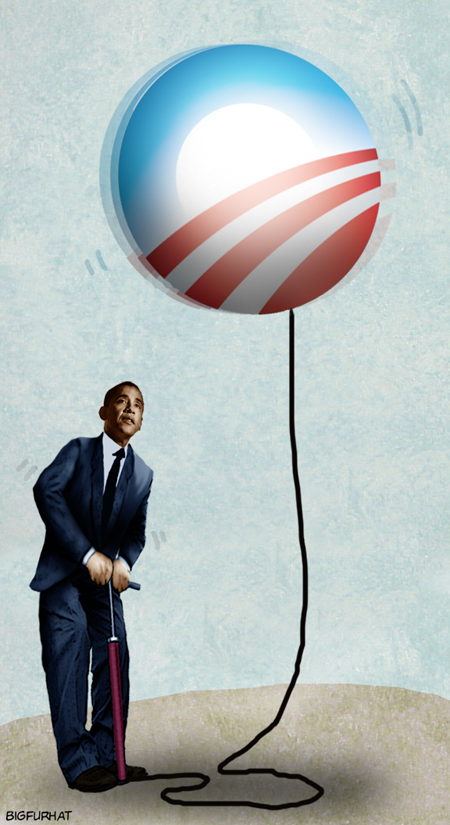