Warning: mysqli_free_result() expects parameter 1 to be mysqli_result, bool given in /var/www/html/americanthinker/admin/common/functions/func.general.php on line 126
 The Knock on the Door - American Thinker
|

The Knock on the Door

By Lona Manning
A sitting President of the United States is "organizing a political organization loyal to him, bound by a pledge, outside the government and existing party apparatus. The historical precedents are ominous."
What is so ominous about an organization? Americans, Alexis de Tocqueville famously observed, "constantly form associations.... If it is proposed to inculcate some truth or to foster some feeling by the encouragement of a great example, they form a society."
Certainly, thousands of organizations seek to influence the political debate. There's Newt Gingrich's American Solutions or the left-wing People for the American Way, for instance.
Political parties are another example of an association, of course. Before, during and after political campaigns, the Democrats and Republicans promote their agendas. As legal entities, they have their own constitutions, their rules of business, their chairmen and officers. They have to be accountable to both the government and their members.
But there is a new organization on the political scene -- "Organizing for America," announced by President Barack Obama in late January but officially unfurled last weekend.
Obama describes OFA as a "grass-roots movement" but OFA is a "project" of the Democratic Natrional Committee.
As Politico reported, OFA will take the 10 million person database built up by the Obama campaign "to mobilize support for the president's legislative agenda." 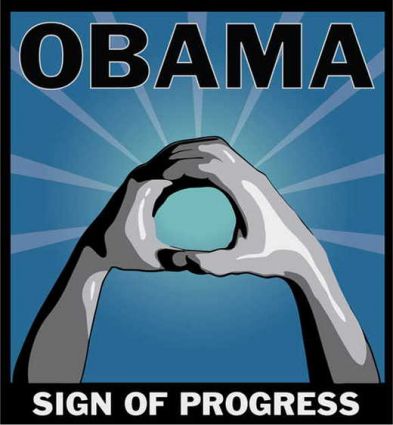 A visit to the OFA website reveals that supporters are not simply asked to sign up, they are asked to take a pledge. A pledge to support -- not the flag, not the constitution, not the country, not even the Democratic Party, but Obama and his "bold plan." OFA does not use the Democratic Party logo but the "O"-shaped logo of the Obama campaign in which the red white and blue of the flag are abstracted to soft pastel colors.
(Celebrities like Ashton Kuchner and Demi Moore did not wait until the official launch to "pledge to be of service" to Barack Obama, of course.)
You will not find any mention of OFA`s governing structure, their budget, their bylaws, or their officers at the OFA website. Donations to the website go to the DNC, but OFA is managed out of the White House. If you click on the comments button, you are taken to a link to the White House email.
Those who take the pledge are asked to "talk with people about the President's plan" and to "ask them to sign their names to the pledge" in support of Obama's policies.
So we have a Movement -- this is their term, not mine -- organized by, and loyal to, a sitting President. Pledge canvassers, armed with your name, will ask you to pledge loyalty to the President too. A president whose term has already become a permanent campaign, is signing up ground forces in a mass organization pledged to personal loyalty to their Leader.
Does anyone know of any historical precedents for this in the United States?
Did Mitch Stewart, youthful director of OFA, who asks Obama's acolytes to organize "neighborhood by neighborhood"  study anything at school about Mao's "Red Guards?
How about Fidel Castro's "widespread system of neighborhood informers"?
Or Hugo Chavez's use of "neighborhood committees"?
Did Stewart learn anything about democracy at all?
Do any of Obama's pledged servants understand why a sitting president has no business creating and deploying his own supporters to help organize their neighbors?
Keep in mind that these acolytes have renounced any thought of questioning the actual policies of the maximum leader. Whatever he says, they are for it. They have given their word.
And they are coming to have a talk with you.
As Thomas Lifson wrote, "This is not the way a democracy is supposed to operate."
|