Warning: mysqli_free_result() expects parameter 1 to be mysqli_result, bool given in /var/www/html/americanthinker/admin/common/functions/func.general.php on line 126
 Is Obama Creating a BC Bubble? - American Thinker
|

Is Obama Creating a BC Bubble?

Governments can provoke chaos by overextending themselves, in what is in effect a bursting of a bubble. A month ago, we discussed the ramifications of an article by Dagny D'Anconia on the possibility of governments becoming bubbles. Of the three causes of bubble formation--external enthusiasm (A), internal overconfidence (B), and internal looting or watering (C)--governments are particularly susceptible to the last two, as attested by numerous historical examples.
In type B collapses, the government extends its activities (e.g. warfare or welfare) beyond its expectable revenues. This tactic is feasible for periods of several years or even decades but will sooner or later cause collapse. In type C bubbles, the government "waters its stock" by creating money and causing inflation.
Many of us feared that the recent bailout and stimulus packages would cause a type B bubble. Now, to make matters worse, our government is generating a type C bubble by printing money without backing by anything except additional Treasury bonds. Cumulative deficit estmiates from the Congressional Budget Office, bad as they may be at 9.3 trillion over 10 years, are premised on optimistic economic growth estimates. Many trillions of dollars in new debt instruments will have to be purchased by the Fed, vastlly inflating the money supply. Hyperinflation looms. As one of our readers, Fearless Bear, commented,

If the security of last resort is an iffy one, we are in deeper muck than anyone wants to admit."

Nowadays, the success of our Treasury bond sales depends on the good will of China's Gao Xiqing, who controls over $700,000,000,000 of outstanding US treasury notes and who reportedly is a hard core Chinese Communist who regards America as China's enemy.
Why, then, is Obama pursuing this risky maneuver? We can imagine at least four possibilities, in order of increasing infamy:
Whatever the reason, the effects could be devastating.
These fears are substantiatable by the tracking of bubble indicators. Dagny D'Anconia has recently developed a quantitative detector of type A bubbles. The "D/G" value---the ratio of the Dow Jones average to the price of gold---appears to provide an inflation-corrected index of public enthusiasm vs. fear about our financial future. A D/G plot of the past century clearly shows three major bubble peaks, centered at 1929, 1964, and 2009--the onsets of the great depression, the Carter stagflation, and the Bush-Obama downturn. Other eras of prosperity or depression, due to other causes, are not indicated; for example, the prosperity during the last years of the Reagan administration took place in a D/G trough. For more details, consult her article. 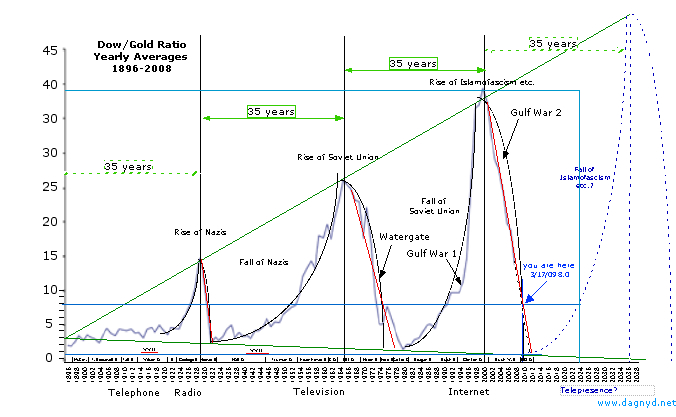 It is possible that similar indicators can be formulated for governmental B and C bubbles. A plot the ratio of federal budget deficit to GDP, a parameter that has already been proposed as an index of instability, may predict type B bubbles. Similarly, rises in the ratio of outstanding national debt (or the total money in circulation) to GDP may indicate the formation of type C bubbles.
Bubbles can be of mixed structure, wherein the different types of driving force reinforce each other in an evil synergy. It could be argued that our present situation is the result of a mixed AB bubble, caused by a combination of investor euphoria and the Clinton-engendered overextension of mortgages to subprime applicants. Rather than counteracting these causes, Obama is exacerbating the problem by forcing through an overblown federal program deficit and printing additional money, thereby creating a monstrous new BC bubble.
However, such analyses are academic; the present case is so obvious that financial commentators here and abroad have already expressed their alarm. We must mobilize immediately to arrest this folly.
|