Warning: mysqli_free_result() expects parameter 1 to be mysqli_result, bool given in /var/www/html/americanthinker/admin/common/functions/func.general.php on line 126
 Racism, Eric Holder, my Son and Me - American Thinker
|

Racism, Eric Holder, my Son and Me

You wanna talk racism, Mr. Holder? Okay. It's time we talked. In fact, we should have had this talk thirty years ago. It's time someone like me talked to someone like you about race.
Why am I qualified to talk about racism? Simple: I am a middle-aged white American male -- this fact alone qualifies me as a racist in this Wonderland of political correctness that is the United States.
But my "racism" goes much deeper than particulars of gender and skin color. In fact, as a working writer and a retired politician, I have a lifelong pattern of "racism." I was called a "racist" twenty-five years ago when I voted against "hate crimes" legislation in the Idaho State Senate. I had this insane notion that all violent crimes were hate crimes -- clearly a racist thought (no doubt instilled by the white culture of hate that surrounded me).
I have been called a racist for writing that the science behind man made global warming is shaky -- and for defending Sarah Palin's acceptance speech for her vice presidential nomination at the RNC. Surely these are thoughts that spring from a childhood that must have been spent with the KKK.
During the past twenty-five years, I have been called a racist for writing about gun control, taxes, international banking, property rights, the Constitution, and abortion. All of these topics are obviously crucially related to race relations in the United States. How could I have been so blind?
In short, I am a racist because I am not a liberal. I am a racist because I do not agree with Eric Holder's politics. Not only am I a racist, Mr. Holder informs me, I am also a coward because I don't want to talk about being a racist.
Mr. Holder wants me to pony up, be a man, and finally face my cowardice -- and the inner hatred I may have of human beings that have a skin color different from mine.
There is one tiny little problem: Holder's request is coming about thirty years too late. And, if my son's and my life experiences are any indication, Holder is twenty to thirty years late challenging other Americans to look inside of themselves.
The fact is that most Americans have already been there, done that.  We let go of our racism -- if we happened to have had any -- years ago.
I first heard about my soon to be son when he was two days old. I had had a friend call me about the baby.  My friend was on an adoption list. He was seventh on the list.  He told me that there was this newborn baby boy that no one wanted.
I bluntly asked my friend if the infant was physically deformed or had some mental impairment. "No. Not exactly," he told me. "Maybe you should come and take a look at him."
So I did. I first held my son when he was three days old. His skin was discolored by jaundice and his body was swollen with some type of blood incompatibility. His skin was a puffy, dark, almost Brunswick green -- except for his fat butt -- which was glaucous hued.
I still tease my son about our first few moments together. Honest to goodness, I thought I was holding My Favorite Martian. He looked like some creature out of a really bad science fiction movie.
As I gazed down at this strange and lonely little being in my arms, I had, what might be called, a religious experience. Lights flashed at the periphery of my vision. (Think of the lights that flash by in the tunnel on a subway.) I found myself sitting in a park on a bench staring into the eyes of a handsome young black man. We were laughing together. We were connected through the laughter to a profound friendship and empathy. I understood and loved this young man and he understood and loved me.
The lights flashed again. I was staring into the eyes of the little baby boy in my arms that I now knew, beyond a shadow of a doubt, was my son. 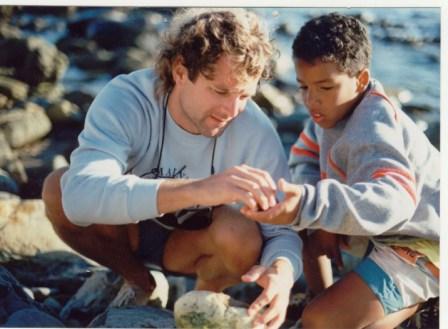 Sure there were a few racial related problems in the late 70s when I first adopted my son. (I was still in graduate school when he was adopted. We lived in Pennsylvania, Maryland, and Virginia until the early 80s.) I went to meetings where some people would not sit next to me because I was holding a little black baby. (Not very many people -- but there were a few.)
I had a couple of people ask me if I was "looking for trouble" by adopting a non-white child. My response? I asked them if they were looking for trouble by asking me such a stupid question.
Reflecting back, problems like these were few and far between.[i] Most people congratulated us, supported us, and admired us.  I don't remember any person openly hating us.
They certainly did not hate my son. In 1982 we moved from the east coast back to Idaho. My son started his education here in Idaho. He was an extraordinarily popular kid in school. In a few of the schools he attended he was the only black student in the school. Although there was some name calling in some of these schools (there always is in every school), there was only one outright racial incident that I know of.
One time, in the sixth grade, one of his classmates called my son a "nigger." The kid physically challenged my son. My son accepted the challenge (he was taught never to back down from this kind of mindless bullying) and agreed to meet the young thug in the playground after school to settle the matter.
I found out about the impending confrontation and drove to the school. I hid behind some cars in the parking lot to watch the episode unfold. Apparently, the ruffian expected my son to be a no-show. I watched as the punk walk down the steps into the schoolyard, got a good close look at my son's fists, and then turned tail and sprinted back into the school crying.
The thirty young white kids, who had gathered in the playground to witness the event, encircled my son and cheered. Six years later, my son went on to be elected student body president of one of the whitest high schools in America. That, Mr. Holder, is how racist America really is -- which is to say not much.
Racism exists in America only in the communities were it is stipulated, reinforced, and taught as a alternative to the veracity of hard work and lasting opportunity that is the real America. In other words, Mr. Holder, racism, where it exists in this country, is a political and cultural contrivance sustained and manipulated by people like you.
Is more evidence needed? My son has always had a job (in fact, he has always had multiple job offers) since he reached manhood. Why? Because he is a responsible, articulate, hard working, smart, human being -- who happens to be black. For someone like my son, belonging to a minority race in today's America is not a curse -- it is a blessing.
My son is married to a very good-looking young white woman. They have two (soon to be three) beautiful sons.[ii] Maybe my daughter-in-law carries the brunt of the racism. I called her the other day, told her I was writing this article, and asked her how bad the racism surrounding her marriage was. What was it like to walk into a store with a black husband and two little mixed race sons. Was she ever threatened? Was she ever afraid?
She just laughed at the questions. (She tends to laugh at me -- must be a daughter-in-law thing.)
"Never," she replied in one word.
"Never what?" I asked.
"Racism. Never. Not once ... well, my ninty-year-old great grandmother didn't like the idea of me dating a ‘colored man.' I remember she really hurt my feelings. But, other than that, I can't think of anything. It just doesn't happen. People love my husband. They respect our family. We just don't have those problems. I don't think people have those problems."
She then told me about some of the mixed race marriages of some of her friends. None of them have problems either. When these couples get together, they don't even talk about racism -- because there isn't any.
Sorry, Mr. Holder, it isn't cowardice that keeps Americans from discussing racism -- it is the fact that there is nothing to talk about. The racist America that you are talking about started to disappear at least thirty years ago.
There are, of course, certain communities in this country that have been deliberately and continually segregated by people like you. In these communities people eat, drink, and breathe racism.
It is a shame that racism still exists in this country. But the Eric Holders, the Jesse Jacksons, the Al Sharptons, and the Barack Obamas of the world are keeping this issue alive. Mr. Holder, the shame and the cowardice of racism belong to you -- not to my son and me.
Larrey Anderson is a writer, a philosopher, and submissions editor for American Thinker. His latest award-winning novel is The Order of the Beloved. His memoir, Underground: Life and Survival in the Russian Black Market, has just been released.
[i] I suppose our little family broke a few racial barriers. It was certainly not our intention. I didn't adopt my son because he was black.  I adopted him because I fell immediately and deeply in love. Still, not many people were adopting kids of different races back then. So we were pioneers -- of a sort.
[ii] These three boys will be the only males in our family to carry the "Anderson" name into the future.
|