Warning: mysqli_free_result() expects parameter 1 to be mysqli_result, bool given in /var/www/html/americanthinker/admin/common/functions/func.general.php on line 126
 How He Did It: A Diagrammatic Analysis of the Obama Campaign - American Thinker
|

How He Did It: A Diagrammatic Analysis of the Obama Campaign

"All issues are political issues, and politics itself is a mass of lies, evasions, folly, hatred, and schizophrenia." ---George Orwell.

The audacity and speed with which Obama railroaded the stimulus bill through Congress took Republicans by surprise. It shouldn't have; it was a logical extension of his campaign tactics.
Like the spear-carrying soldiers of Ethiopia, overwhelmed by Mussolini's tanks and poison gas in 1936, the Republicans simply don't know what hit them in last year's election. Some felt that they had conducted an old-fashioned 20th century campaign while Obama mounted the first truly information-age 21st century political blitzkrieg. Others blame the blatant media bias, the race issue, or the unprecedented scale of fund raising and spending.
The first month of Obama's regime has provoked a similar bewilderment. A dazed Congress hastily authorized a huge document, filled with hidden booby traps like RAT, that none of them had actually read, let alone comprehended. Republicans are now cowering in corners, wondering what atrocity will come next
Anyone hoping to launch a successful counterattack must first analyze Obama's campaign and assess the factors that contributed to its success. To assist in such efforts, I have constructed a block diagram [1] of the post-nomination campaign's components, interactions, and successive stages [2]. A study of this diagram will, I think, reveal interactions that are too complex to be sorted out and comprehended from a verbal description alone.
The Diagram 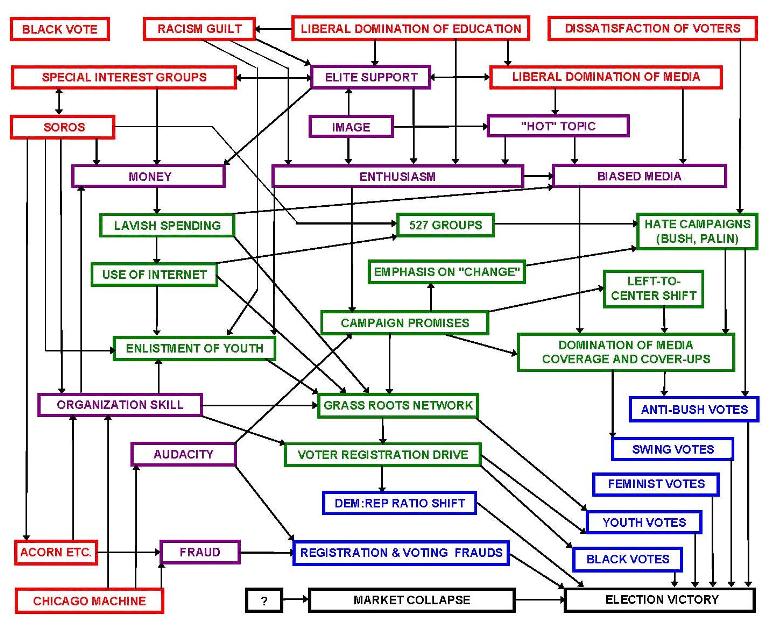 The diagram is colored according to the phases of the campaign, which, like a military campaign, can be divided into the resources provided by the terrain, available forces and weapons, strategy and tactics, and objectives to be taken [3].
The resources, which Obama, or any other black liberal candidate, had to start with, were:
The forces and weapons that Obama had at his disposal, both from his personal attributes and from his access to the above resources, included:
Thus armed, Obama, and/or his associates and mentors, employed the following strategy and tactics to exploit these assets:
Finally, the attainment of the following objectives, or harvesting of votes:
This diagram is herewith presented as a starting point for further discussion and study. It is by no means complete. Some factors, such as reactions to the Republican campaign and threats to potential McCain donors, have been ignored since they shed little light on Obama's overall strategy. In other cases, links have been omitted because of the limitation of a static two-dimensional diagram. For example, the links from "audacity" and "Soros" to other elements of the campaign are so numerous that their complete insertion would make the diagram difficult to decipher.
Readers are encouraged to modify the present diagram by adding boxes or links. Further analysis would be greatly facilitated by converting this diagram into a Muckety map, which would enable flexibility of arrangement and the tying of links to references. This might enable the construction and interpretation of a more detailed diagram, such as the one that James Simpson has constructed to show how Obama, in conjunction with his radical associates and Soros' organizations, has orchestrated a strategy of manufactured crisis.
A Possible Interpretation
Two people can look at the same diagram and come up with different interpretations. I herewith present mine, fully aware that others may legitimately disagree. I seem to see the following major strategic trends:
Some of these strategies, such as the intensive fundraising, made effective use of TV, the Internet, and other tools of modern information technology. But this is mere technological adaptation. Every one of the above strategies has been used, albeit in a more primitive form, in previous presidential campaigns. Jefferson used most of them against Adams in the notorious campaign of 1800.
To determine what made Obama's campaign a success, we must look deeper to identify the basic psychological qualities that underlie these strategies. I perceive them to be:
These are the qualities that I perceive in the person or persons who planned the Obama campaign, whether it was Obama himself, an associate or mentor, or a combination thereof. However, there can be no doubt that Obama at least assented to the use of the aforementioned strategies and therefore must to some degree possess the qualities that engendered them. Indeed, these qualities virtually define the sort of narcissistic personality that has been attributed to Obama.
If, as I contend, these are the root qualities that created the Obama campaign, then we should expect more of the same from the new Obama administration. For starters, the stimulus Trojan horse is a convincing example.

NOTES:
[1]  I am deeply indebted to Richard Baehr, Ed Lasky, and Dagny D'anconia, who reviewed a draft of this article and pointed out several omissions and vagueries.
[2]  The present diagram applies only to the post-nomination phase of the Obama campaign. The campaign against Hillary Clinton had a somewhat different and more orthodox set of strategies and tactics.
[3]  Because of the fuzziness of the analogy between military and political campaigns, the difference between resources and forces is somewhat arbitrary. (I drew the line at the basic resources available to any black liberal Democratic candidate). Some boxes could be colored either red or purple. Similarly, intermediate objectives might be colored either blue or green.
[4]  Unfortunately, political or military strategic skill doesn't always guarantee presidential skill. As in Grant's case, one can be a great general and a terrible president.
[5]  Similarly, as Kennedy demonstrated, successful audacity in a political campaign is no guarantee of statesmanship or good judgment in dealing with foreign powers.
Contact Paul Shlichta