By Viscount Monckton of Brenchley

In late January 2009, a U.S. government report on Arctic climate, prepared by an international team of 37 climatologists, concluded that the recent rapid warming of polar temperatures and shrinking of multi-year Arctic sea ice are "highly unusual compared to events from previous thousands of years". The report's summary says, "Sustained warming of at least a few degrees" is probably enough "to cause the nearly complete, eventual disappearance of the Greenland ice sheet, which would raise sea level by several metres."

The report continues, "Temperature change in the Arctic is happening at a greater rate than other places in the Northern Hemisphere, and this is expected to continue in the future. As a result, glacier and ice-sheet melting, sea-ice retreat, coastal erosion and sea-level rise can be expected to continue."
The report says that ice cover in the Canadian Arctic and throughout the polar world has experienced record-setting melts in the past few years. The summer of 2007 saw polar ice cover shrink to its lowest extent in recorded history. The summer melt in 2008 came close to matching that record, and recent research indicates that overall ice volume -- because of the continual replacement of thicker, multi-year ice with thinner new ice -- was lower in 2008 than 2007.
The report also mentions "unusual warming" of the Canadian Arctic in the summer of 2008, including record-setting high temperatures in Iqaluit, Nunavut, the re-opening of the Northwest Passage, an "unprecedented" clearing of ice from the Beaufort Sea and the collapse of hundreds of square kilometres of ancient ice shelves on Ellesmere Island.
The report concludes: "Some projections of future human-induced climate change exceed documented natural variability. The past tells us that when thresholds in the climate system are crossed climate change can be very large and very fast. We cannot rule out that human-induced climate change will trigger such events in the future."
The truth: This report reveals very little that is new, and is predicated on a number of unproven assumptions, not the least of which is that the "global warming" that began 300 years ago, when the Sun was at its least active for 10,000 years, and continued until the latter part of the 20th century, when the sun was at its most active for 11,400 years, is chiefly anthropogenic. The mere fact of this warming, nearly all of which took place before humankind can possibly have had any significant influence, does not tell us its cause. Likewise, the mere fact that the warming has had effects on the climate does not tell us the cause of the warming. According to Scafetta & West (2008), some 69% of the warming of the past half-century was natural.
"Arctic warming and sea-ice shrinkage are highly unusual": The report itself later admits that the current state of the Arctic is not, in fact, either unprecedented or outside natural variability of the climate.
"Sustained warming of at least a few degrees may melt Greenland": Even this event, if it were to occur, would not be unprecedented: Greenland's ice sheet was entirely absent 850,000 years ago, when humankind could not have been responsible because we were not there. The report is merely echoing the previously-published conclusion of the IPCC, in its 2007 report, that warming of several degrees Celsius, sustained over several millennia, and could cause half of the Greenland ice sheet to melt, raising sea levels by about 10 feet.
"Warming is faster in the Arctic than elsewhere": Any warming, whether natural or anthropogenic, will occur disproportionately in the Arctic, because the atmosphere is, in effect, a giant engine transferring heat from the tropics, where temperatures change little, to the Poles. A point that the report carefully fails to mention is that, though the Arctic has warmed, most of Antarctica has cooled over the past half-century.
"Glacier and ice-sheet melting will continue": Like much else in the report, this is not evidence but a guess. In fact, several of Greenland's glaciers have been advancing recently, probably in response to the eight-year global cooling trend that the report somehow fails to mention - 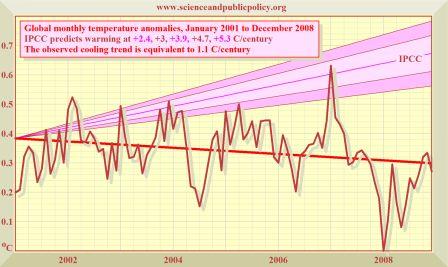 "Sea-ice retreat can be expected to continue": The retreat of the sea ice has been noticeable in recent summers, but the winter sea ice extent (shown in purple in Figure 2) shows very little change in the 29 years of satellite observation -

The scientists were writing about the Arctic, but it would surely have been fairer if they had mentioned that the decline in Arctic sea ice has been matched by an increase in Antarctic sea ice, which has recently been at a near-record extent (though we shall be honest enough to mention, unlike those who reported the scientists' results, that the "record" only goes back 30 years) - 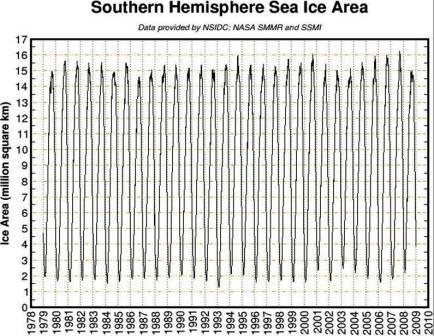 Note the peak in Antarctic sea-ice extent in the late summer of 2007, exactly coinciding with the record low in Arctic sea-ice extent at the same time. The latter event has been reported repeatedly in the media, which have been almost entirely silent about the former.
Overall, there has been no uptrend or downtrend in the global extent of sea ice since satellite monitoring began 30 years ago -

Source: University of Illinois
"Sea-level rise can be expected to continue": It certainly can. It has been rising for 10,000 years, at a mean rate of 4 feet/century. For 9,950 of those 10,000 years, humankind cannot have had anything to do with it: it was natural. In the 20th century sea level rose by just 8 inches and in the 21st century the official projection is that it will rise by little more than 1 foot - a quarter to a third of the long-run rate - 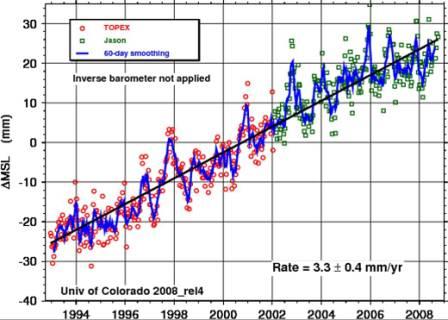 Source: University of Colorado
There is no sign of an accelerating trend in sea-level rise. The IPCC, in its 2007 report, said that though sea level had risen 8 inches in the 20th century it was now rising at 12 inches/century. However, the IPCC did not say that the difference may well have been attributable to the change in measurement from tide-gauges to satellites that occurred in 1993 - the moment from which the IPCC dates its "acceleration" in the rate of sea-level rise.
"Record-setting high temperatures in Iqaluit, Nunavut": This type of reporting is a demonstration of the "Wisden Fallacy", named after the famous compiler of Victorian English cricket statistics. In any object - such as the climate or the game of cricket - that generates a wide variety of complex statistics, records will tend to be broken very frequently. But it is fallacious to assume that the breaking of an individual record, or even of several records, indicates a dangerous trend. The summer of 2008 also set records for cold weather in a number of Arctic locations, and the winters of both 2007 and 2008 have been particularly cold, with Inuit reports of polar bears approaching human settlements in the hope of obtaining food because the intense cold has interfered with their usual feeding habits.
"Unprecedented" clearing of ice from the Beaufort Sea": This is another instance of the Wisden Fallacy. It can readily be dispelled by displaying the 30-year trend in sea ice in the Beaufort Sea, which has been rising gently throughout -

"Some projections of future human-induced climate change exceed documented natural variability": Indeed they do: that point is scarcely new. But note that we are talking of "projections", not of observations. The central question in the debate about the climate is the extent to which the "projections" are likely to prove accurate. Not one of the numerous computer models on which the IPCC's "projections" are based was able to predict the eight-year global cooling trend that occurred throughout the presidency of George Bush.
"When thresholds in the climate system are crossed climate change can be very large and very fast. We cannot rule out that human-induced climate change will trigger such events in the future." Since we do not know what events caused the rapid changes in temperature at the beginning and end of previous interglacial periods, and we do not know why global temperatures in the present interglacial period have been up to 6 degrees C cooler than in previous interglacial periods, it is not possible to predict whether, let alone when, a little warming will suddenly trigger "very large and very fast" climate change. It was Edward Lorenz, in 1963, who demonstrated that we cannot predict future phase transitions in the climate, for we can never know its initial conditions to a sufficient precision for reliable prediction. There is, therefore, no basis for saying that warmer weather, or cooler weather, will or may precipitate a phase transition. Indeed, the most dangerous event of all might be the prolongation of a stable climate. We do not know.