Warning: mysqli_free_result() expects parameter 1 to be mysqli_result, bool given in /var/www/html/americanthinker/admin/common/functions/func.general.php on line 126
 Bailouts, Relativity and Dead Parrots - American Thinker
|

I'm still trying to grasp the concept of a trillion dollar bailout.  Einstein thought about riding a beam of light.  I think he had the easier time.

Think about this bailout thing for a moment.  We are told that the problem is a credit crunch  -- a lack of lendable funds, or a lack of willingness to lend them.  The solution would therefore seem to lie in coaxing money from the relatively asset-rich to the relatively asset-poor.
How would you do that?  Our government is doing it with huge bailouts, an $850 billion bailout under President Bush and an $825 billion or so stimulus under President Obama, on top of all the other bailouts for AIG, Fannie Mae, Freddie Mac, etc.  Multiple trillions of dollars.
Where does the government get this money?  It doesn't have it on hand, not by a long shot; it already owed the public over $5 trillion before this all started.  Answer: it borrows it.
That's right.  When the problem is lack of borrowable money, the federal government steps in and borrows a few trillion more.  Let's be clear: the government said the problem was lack of supply, so it increases the demand by trillions?
This makes zero sense to me.  The government will be borrowing from lender A to give to lender B.  It would be better if we could simply get A to lend to B directly and therefore avoid the middleman.  This also makes me wonder if we'd be better off having lender A provide a loan to himself.  (I'm not so sure that's not happening.)
But not all the bailout money is even going to lenders.  That "stimulus" money will therefore do nothing for a credit crunch, but will simply dish out money to Americans that was borrowed from other Americans, to be paid back by future Americans.  Are we supposed to thank the government for forcing us to borrow money from ourselves?  Doesn't the idea that this will benefit us defy some law of thermodynamics?
How does borrowing by the government help other borrowers, the supposed intent of fixing a credit crunch?  Talk about "crowding out."  This is Godzilla "crowding out" Bambi.
I must be wrong about something, because geniuses from Henry Paulson to Timothy Geithner seem to disagree with me.  (Maybe it has to do with curved space-time.  If the government's debt has a large enough mass, it bends the whole geometry of the universe to its will.  Or something.  Think of banks as balls on a rubber sheet ...)
Now if the problem really is loans being hard to get, the solution would seem to lie along the following lines:  help make sure loans get paid back, and at a nice rate of return relative to other investments.  That is, coax the relatively asset-rich to cough up their money to the relatively asset-poor.  (It's all relative, though.  AIG was not exactly "poor.")
For those lenders that did not lose a lot of assets,  that could be accomplished by -- drum roll -- leaving them alone.  And leaving their industry alone.  Just let them continue to do business as they had, in an environment of manageable risk that they understood.  You don't encourage good poker playing by turning over the table or re-distributing the chips.
For those lenders that did lose assets (because they never knew how to value Credit Default Swaps, for example), let them dig themselves out, go bankrupt or be bought out.
First, there is no magic wand that can make those lost assets reappear -- they are lost.  Gone.  Kaput.  Those assets are no more, bereft of life.  They rest in peace.   John Cleese bought a parrot in better shape than those assets.  Secondly, whatever assets they have left are still assets -- they can be absorbed by healthy companies.
Last and not least, messing with the rules causes those lenders who did not lose assets to withdraw their bets.  The poker game shuts down, or goes someplace where the owner doesn't shuffle the chips every few hands.
Good lenders withdrew their bets because the owner shuffled the chips and changed all the rules.  How much were bets withdrawn?  From just before the Senate approved the bailout (October 1, 2008), to Election Day (November 4, 2009), the S&P 500 fell over 13%.  Then from Election Day (Nov. 4, 2008) to inauguration, as Obama's economic plans firmed up and became more public, the S&P fell another 20%.
Now how would you describe the market's reaction to the bailouts, Obama's election and Obama's economic plans?  I describe it as the poker players dropping out of the game and looking for someone else's back room.  Maybe I'm too dense to see the magic powers of bailouts, but the markets seem to be agreeing with me.
Supposedly, our troubles all started when house prices fell.  But they didn't fall all that much.  The Office of Federal Housing Enterprise Oversight says that house prices didn't fall at all until 2008, and then by only about 5%.  House prices went up by that much every previous year of the Bush administration.  Look at OFHEO's chart. 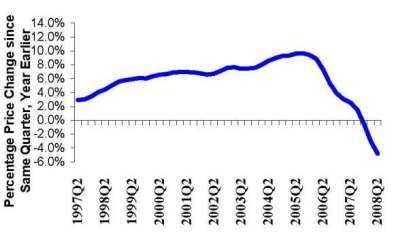 And all those foreclosures?  The foreclosure rate is always reported by what percentage it goes up; you rarely get the actual rate.  Here, for example, is some reporting that lets the truth slip, from Foreclosure1 .

After all that heavy breathing, we see that the real rate is one foreclosure per 775 households, 0.13%.  The great housing crisis, which led to the US economic crisis, which led to the Global Depression of 2009, is a foreclosure rate of 0.13% and a one-year price drop of 5%.
Now how did a fall of 5% in the price of residential real estate in the US cause US stock markets to decline 40%, the US economy to enter a recession, the global economy to enter a recession, and Iceland to go bankrupt?  Credit Default Swaps can only explain so much.
In my advanced age I've come to believe that if something does not make any sense, it's because it does not make any sense.
I have many opinions about Henry Paulson, Ben Bernanke and even Barack Obama, but I don't think they are all stupid, in any normal sense of the word "stupid."  I can't believe that they believe these bailouts will really help the real economy.  How can anyone think that massive borrowing is the way to fix a lack of borrowable funds?
I think they are motivated by two things.  First is a version of CYA.  Imagine yourself as Treasury Secretary or head of the Fed or even President.  You are perceived to be in charge of the economy (even though no one really is, except maybe George Soros).

So what do you do?  You do what governments throughout history have always done in such situations: spend massive amounts of other people's money.  When all is said and done you can say, "Well at least I did everything in my power to avert this crisis." In a world where intentions trump results, it's the smartest thing you can do.
President Obama and his capo, Rahm Emanuel, also have another motivation: a crisis is a terrible thing to waste.  The outgoing Republicans could have left Obama no better gift than the notion that the government must spend trillions of dollars more than it's ever spent before, immediately, or we will all die.  The Democrats were handed both the money and the permission.  (Here, son, take the car and this fifth of whiskey.)
Here is what makes sense to me.

Didn't you ever wonder if the witch doctors themselves thought dropping a virgin in the volcano would really bring good crops?  I'm thinking they didn't.  But it kept them in their witch-doctor jobs and gave them a few final moments in private with the virgins.
And that, boys and girls, is how government works.
Randall Hoven can be contacted at randall.hoven@gmail.com or  via his web site, kulak.worldbreak.com.
|