By Jeff Emanuel
In recent years, the Russian bear has bared his fangs at Ukraine as the grim season commemorating genocide-by-famine 75 years ago.

On November 22, the former "Soviet republic" of Ukraine observed the 75th anniversary of the end of the Holodomor, a genocide-by-famine perpetrated by Josef Stalin's Soviet government which left up to ten million Ukrainian men, women, and children dead due to forced starvation.
Punishing Enemies of Collectivism
In the fall of 1932, Stalin's Soviet Union was facing unrest caused by a shortage of food in the cities under his control. Rather than allow for the chance of a replay of 1917, when inner-city hunger helped the Bolsheviks instigate their successful communist revolution, Stalin turned his attention westward to the breadbasket of Europe, Ukraine.
Driven by the dual goals of increasing Russia's grain stockpile to the point where it could not only feed its city-dwellers but also export food for profit, and of forcing the Ukrainian farming class to accept Soviet collectivism (something it had not yet done at this time, despite the imposition of a communist central government on the East European state), Stalin increased the amount of grain Ukraine was required to provide the USSR by 44%, a level too high for the Ukrainian farmers to meet and also be able to feed themselves.
Stalin sent a host of Communist Party officials, soldiers, and secret police to Ukraine to enforce on penalty of death the Soviet law stating that no grain or grain products - not even a loaf of bread - could be kept by the Ukrainian peasants for their own consumption until the entire requisition quota had been fulfilled.
Further, according to a Ukrainian historical website, "an internal passport system was implemented to restrict movements of Ukrainian peasants so that they could not travel in search of food. Ukrainian grain was collected and stored in grain elevators that were guarded by military units [and] NKVD secret police units while Ukrainians were starving in the immediate area."
From "Tragedy" to "Statistic"
The barbaric tactic worked all too well. Between 1932 and November 1933, the man who became infamous for, among other things, coining the phrase, "One death is a tragedy; a million deaths is a statistic" added nearly ten million innocents to his tab through starvation, while taking such plentiful fruits of their labors for his own use that "journalists," like New York Times writer and communist sympathizer Walter Duranty, easily swallowed and regurgitated that Soviet party line that the sheer amount of grain flowing into Moscow and out through port cities like Leningrad and Vladivostok meant that the claim of famine anywhere in the Soviet principate was patently absurd.
One writer at conservative weblog RedState.com described the ending of that year of barbarism:

As fall turned into winter in Ukraine in late 1933, good summer and fall weather had produced a bumper crop in Ukraine's ultra-fertile fields. By later in November, it continued to sit there and rot under the impending damp of winter - because there was no one to harvest it. Everyon 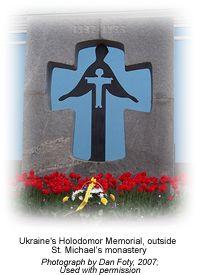 e who had planted the crops in the spring was dead - there was no one left alive to gather the harvest.

On November 28, 2006, after Ukrainian President Viktor Yushchenko ordered the release of thousands of KGB documents showing that the forced famine was perpetrated in part for the purpose of wiping out ethnic Ukrainians, that nation's Parliament declared the Holodomor - a Ukrainian term which, roughly translated, means "Death by Hunger" - a deliberate act of genocide by the USSR.
Different Century, Same Bully
While Ukrainians were somberly observing the 75th anniversary of the end of Stalin's forced famine, Russian chose to remind those in Ukraine and elsewhere of its continued desire to play a negative role in the affairs of its neighbors. This time, Moscow threatened to cut off the natural gas supply flowing through that gateway to Western Europe if the entirety of Ukraine's fuel-related debt to its former ruler, estimated at $2 billion, was not immediately settled.
The timing of the threat, which was likely every bit as accidental as President Dmitriy Medvedev's statement, made on the day Barack Obama was being elected President of the United States, that Russia was "prepared to place short-range missiles in the territory of Kaliningrad in response to U.S. plans for a missile-defense shield in Poland and the Czech Republic," did not go unnoticed by its target audience.
"The unsubtle Kremlin gets no points for timing," wrote the editors of Ukraine's Kyiv Post on November 26. "The threat to cut off gas in the dead of winter came over the weekend that Ukrainians commemorated the Holodomor, the death by hunger of millions of Ukrainians in 1932-33. The Soviets lied about the Stalin-ordered famine and today's Russian leadership still belittles the epic crime."
Russia's Financial Crisis
On December 4, Prime Minister Vladimir Putin reiterated the threat, this time before an international television audience. The move comes as Russia is attempting to force its former vassals, Ukraine included, to transition from paying Soviet-era subsidized prices for natural gas to paying the full international rate.
"How can we leave in place the prices of the current year?" Putin asked, referring to the hardship being brought on Russia by the growing global economic crisis (and by the transcontinental state's decision to increase the percentage of its GDP being spent on the military by nearly 200% over the last year to fund its invasion of former satellite Georgia and to fund its efforts to reassert itself on the global stage as a counter to the U.S.).
"Then," according to an AFP report of Putin's address, "drawing on a Ukrainian colloquialism -- and speaking in Ukrainian -- Putin added: ‘Have you lost your mind?'"
A Threat with Precedent
"In the long march of history, progress is being made," the Kyiv Post's editors wrote. "Kremlin leaders in the early 20th century starved Ukrainian men, women and children to death. Their successors in the 21st century merely threaten to freeze Ukrainians to death."
Russia's threat to cut off heating fuel to Ukraine, where winter temperatures reach as low as -68° Fahrenheit as a matter of course, is not without precedent. In January 2006, Russia responded to Ukraine's refusal to pay a higher price for fuel by reducing the natural gas flowing through Ukraine to a level commensurate with Western Europe's paid allotment alone. Ukraine responded by siphoning gas to meet its own needs (though the government still officially denies that any siphoning ever took place), and, after some European leaders expressed concern about the amount of natural gas that was reaching their nations, Russia returned the flow of fuel to its full previous level.
A Desperate Desire for Relevance
The former Soviet capital has taken advantage of the state of flux in America's political leadership, and of outgoing President George W. Bush's unwillingness to make any further military commitments, to take a more active role both in the affairs of its neighbors and in those of Western nations. From providing weapons and nuclear aid to Iran, to running roughshod over former vassal state and current NATO applicant Georgia this August, to dispatching President Medvedev to meet with Fidel Castro in Cuba and Hugo Chavez in Venezuela, to conducting joint naval exercises with Venezuela in the Caribbean Sea, Russia's leaders are working to regain the lost trust and rebuild the damaged nationalist pride of their subjects by asserting international relevance in the best way they know how: by intimidating neighbors and acting, despite their inability to actually be such, as a global counterbalance to the United States.
This year's dispute with Ukraine will likely be solved, as its 2006 predecessor was, with little or no physical harm done to Ukraine's population. Putin's threat, though, is yet another example of Russia's growing efforts to impose itself once again on the international stage in the way it has been doing so for centuries: through imperialism and intimidation.

"It seems that the closer a country is located to Russia, the worse Moscow's relations are with that nation," Russian radio host Yulia Latynina wrote in the December 3 Moscow Times. "The Kremlin wants to be on good terms with France and Germany, for example, but if any country that was once part of the Soviet empire tries to shed light on its own history, the Kremlin lashes out with angry reproaches that it is deliberately provoking a conflict."

While this will likely always be a hallmark of Russia's foreign policy, it is one which the civilized nations of the world - from Eastern Europe to the United States - have a duty to oppose in all cases where it manifests itself in acts of aggression, lest invasions of sovereign states like Georgia and the perpetration of barbaric tragedies like the 1932-33 Holodomor be allowed to occur once again.
Jeff Emanuel, a special operations military veteran, is a columnist, a combat journalist, and a director emeritus of conservative weblog RedState.com. An archive of his writings can be seen at JeffEmanuel.net.
|