Warning: mysqli_free_result() expects parameter 1 to be mysqli_result, bool given in /var/www/html/americanthinker/admin/common/functions/func.general.php on line 126
 Playing 20 Questions with the Media - American Thinker
|

Playing 20 Questions with the Media

Journalists are inquisitive creatures by nature, constantly asking questions and demanding answers. Loudly. Yet, some questions never seem to be thrown their way. Here are twenty questions I would like to ask the media:

Has anyone else ever used "The Office of the President Elect" on a podium before?

Also, is that the Obama Seal on the podium? 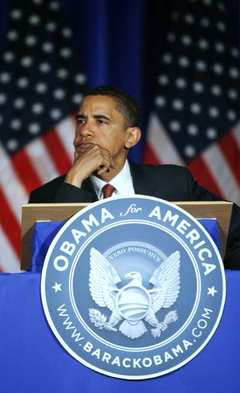 Will it ever be acceptable to use the President Elect's full name, Barack Hussein Obama II?  Will the first time some people hear his middle name said in public be when he's sworn in as President?
Following this month's Democrat victory, is it finally okay to call liberals, liberals? Or must we still call them progressives, instead?
When, if ever, will it be possible to criticize Barack Obama and not be called a racist?

Having already compared Obama to Abraham Lincoln, FDR and Jesus Christ, what superlative comparisons does that leave to use once he's been in office?
During, and after, the election we saw polls of how almost every demographic would, or, did vote -- except for journalists. When will you ever report how you in the media voted?
Does Chris Matthews still get a thrill up his leg when Obama speaks?
The Obama campaign raised and spent almost twice as much as President Bush did in 2004 to win approximately 1.5% more of the public vote, despite economic and political conditions that should have guaranteed a landslide. Will you report what Obama policies made people so reluctant to vote for him?
Will you probe voter registration, and voting, irregularities connected to ACORN now, in time to make changes before the next election, or will we be hearing about them again in four years?
Will you pursue allegations of illegal donations to the Obama campaign  with the same fervor that you investigated President Bush's dismissal of U.S. Attorneys for failing to pursue voter fraud?
Even the enemy has admitted that Iraq and Afghanistan are different fronts of the same war. Why do you continue to report them as two separate wars?

Having admitted  ex post facto to "disgusting" bias in helping the President-Elect win, will you pledge to not help him win re-election four years from now?
When was the last time that an incoming administration was setting policy before taking office,  and how did you report it?
Since the Vice-President Elect has publicly guaranteed that the new administration will be tested abroad, from where, and when, will that test come?
Since the election, there have been -- as a rough guess -- approximately 3,000 news stories about Sarah Palin and roughly, oh, three about Joe Biden. Since when has it been more important to cover the losing Vice-Presidential candidate than the Vice-President elect?
Is there an "Office of the Vice-President Elect"?
|