Warning: mysqli_free_result() expects parameter 1 to be mysqli_result, bool given in /var/www/html/americanthinker/admin/common/functions/func.general.php on line 126
 Obama's Big Lie in the Last Debate - American Thinker
|

Since even CNN is now reporting on widespread voter fraud being perpetrated by the radical group ACORN, Obama has been forced once again to distance himself from his old buddies. I guess Bill Ayers and Reverend Jeremiah Wright won't feel so lonely anymore.

Interestingly, despite their damning report on ACORN, CNN uncritically repeated what has now become the official Obama position on all his radical friends, to wit: "I hardly knew the man..." In the final presidential debate Wednesday night Obama reiterated that his only tie to ACORN was representing them along with the U.S. Justice Department, in a lawsuit demanding the Illinois state government enforce the new Motor Voter law. As with Ayers and Wright, he is lying. He knows it. And it is a Big Lie.

One of Obama's first career jobs was with ACORN. He was recognized early on as a talented organizer by ACORN leader Madeline Talbott, (think smooth talker) and she got him to coach ACORN leaders in community activism. At the time, Talbott was focusing on ACORN's efforts to expand bank lending to low-income, high-risk customers - the activity that ultimately precipitated today's mortgage market failure - so it is likely Obama trained her leaders with a focus on that effort.

In 1992, Obama ran Chicago's office of Project Vote, an ACORN subsidiary which was credited with registering 150,000 voters in a successful effort to elect Democrat Carol Moseley Braun to the U.S. Senate. According to a 1993 article in Chicago Magazine, Obama was Project Vote's shining star:

The most effective minority voter registration drive in memory was the result of careful handiwork by Project Vote!, the local chapter of a not-for-profit national organization. "It was the most efficient campaign I have seen in my 20 years in politics," says Sam Burrell, alderman of the West Side's 29th Ward and a veteran of many registration drives.

At the head of this effort was a little-known 31-year-old African-American lawyer, community organizer, and writer: Barack Obama...

How many of those votes were fraudulent we will never know but Moseley-Braun was a one-term Senator, shot down by allegations of corruption. Her 2003 bid for the presidency was also very short-lived due to the resurfacing of these allegations. Of George Will, who wrote an article about her alleged corruption, Braun had particular contempt: "I think because he couldn't say nigger, he said corrupt. I mean this very sincerely from the bottom of my heart: He can take his [Ku Klux Klan] hood and put it back on again, as far as I'm concerned." Charming! Just the kind of "centrist," like Jeremiah Wright and Bill Ayers, I would expect Barack to support.

Project Vote was founded and continues to be managed by National Welfare Rights Organization (NWRO) activist Zach Pollett. From my earlier article, you will recall that the NWRO was created to initiate the Cloward-Piven Strategy of manufactured crisis. Project Vote was an extension of this strategy. As described in DiscoverTheNetworks.org:

The stated purpose of Project Vote is to work within the system, using conventional voter mobilization drives and litigation to secure the rights of minority and low-income voters under the U.S. Constitution. However, the organization's actions indicate that its true agenda is to overwhelm, paralyze, and discredit the voting system through fraud, protests, propaganda and vexatious litigation. In this respect, Project Vote is following the so-called "crisis strategy" or Cloward-Piven Strategy pioneered during the Sixties by Columbia University political scientists Richard Cloward and Frances Fox Piven.
As a follow-up to their effort to collapse the welfare system in the 1960s, in 1983 Cloward and Piven founded the Human Service Employee Registration, Voting and Education campaign Fund (Human SERVE Fund). Its objective, they said, was to increase voter turnout among the poor. But unlike Project Vote, Human SERVE did not rely on conventional door-to-door canvassing, or even on the more effective method of registering people in food stamp and unemployment lines which Project Vote had pioneered. Rather, Human SERVE lobbied government officials directly to enact laws and regulations directing public employees to offer to register citizens applying for services at government agencies. This effort realized its grandest ambition on May 20, 1993, when President Clinton signed the National Voter Registration Act of 1993 -- commonly called the "Motor-Voter Act." It ordered every state to provide resources enabling people to register to vote at state agencies, at the same time they applied for drivers' licenses, welfare, Medicaid and disability benefits. In June 2000, Cloward and Piven dissolved Human SERVE, leaving to ACORN and Project Vote the task of making the Motor Voter "crisis strategy" work at the polls. It did, in fact, fuel an explosion of fraudulent voters.

Woods Fund When Obama went to work for Bill Ayers at the Woods Fund, he actively promoted funding ACORN's kind of activism. Though the Fund considered such groups controversial, they went on to provide ACORN with grants totaling $190,000 over the three years Obama was there. Specifically:

This was not merely a measure of Obama's devotion to ACORN however. More likely it was part and parcel of the Chicago Way of getting ahead in politics. As Jennifer Rubin relates:

The pattern of funneling money to political allies and their allies is evident throughout Obama's tenure at the Woods Fund. Tens and tens of thousands of dollars were granted to organizations including the Brighton Park Neighborhood council, Business and Professional People for the Public Interest (BPPPI), the Center for Neighborhood Technology, Centers for New Horizons, the Chicago Jobs Council, the Chicago Education Fund, the Chicago Institute on Urban Poverty, the Chicago Urban League, The Gamaliel Foundation.
Dozens of the board members and officials from these organizations in turn would donate money, in many instances up to the legal limit, for Obama's Senate and Presidential races between 2004 and 2008. For example the Woods Fund between 1999 and 2002 granted $60,000 to BPPPI. Board member and executives donated at least $16,950 to Obama's political campaigns. The Woods Fund granted the Center of Neighborhood Technology $150,000 between 1999 and 2002. Obama received over $24,000 in campaign donations from its officials. And in turn Obama made sure to seek earmarks on their behalf once he reached the U.S. Senate.

The State Senator From ACORN Apparently, ACORN's handwriting was all over Obama's Illinois Senate work also. As Stanley Kurtz explains:

So along with the reservoir of political support that came to Obama through his close ties with Jeremiah Wright, Father Michael Pfleger, and other Chicago black churches, Chicago Acorn appears to have played a major role in Obama's political advance. Sure enough, a bit of digging into Obama's years in the Illinois State Senate indicates strong concern with Acorn's signature issues, as well as meetings with Acorn and the introduction by Obama of Acorn-friendly legislation on the living wage and banking practices. You begin to wonder whether, in his Springfield days, Obama might have best been characterized as "the Senator from Acorn."

Finally, the Obama campaign paid over $800,000 to an ACORN subsidiary, Citizen's Services, Inc. for get out the vote efforts. They were delinquent in reporting this to the FEC as well. Sweetness & Light has a detailed summary of Obama's lifetime work for ACORN. In it they quote ACORN leader Toni Foulkes from a 2003 article in Social Policy:

Case Study: Chicago-The Barack Obama Campaign Obama started building the base years before. For instance, ACORN noticed him when he was organizing on the far south side of the city with the Developing Communities Project. He was a very good organizer. When he returned from law school, we asked him to help us with a lawsuit to challenge the state of Illinois' refusal to abide by the National Voting Rights Act, also known as motor voter. Allied only with the state of Mississippi, Illinois had been refusing to allow mass-based voter registration according to the new law. Obama took the case, known as ACORN vs. Edgar (the name of the Republican governor at the time) and we won. Obama then went on to run a voter registration project with Project VOTE in 1992 that made it possible for Carol Moseley Braun to win the Senate that year... Since then, we have invited Obama to our leadership training sessions to run the session on power every year, and, as a result, many of our newly developing leaders got to know him before he ever ran for office. (Emph. mine.) 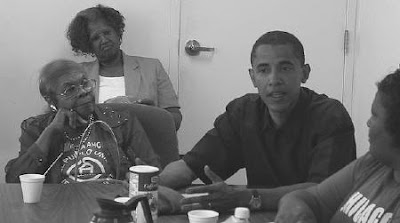 Foulkes goes on to cheerily say:

Thus, it was natural for many of us to be active volunteers in his first campaign for State Senate and then his failed bid for U.S. Congress in 1996. By the time he ran for U.S. Senate, we were old friends...(Emph. mine.)

And, as Ms. Foulkes notes, ACORN has been instrumental in every Barack Obama campaign. Lastly, Mr. Obama also seems to have forgotten that his campaign secretly gave at least $832,598.29 to Citizens Services, Inc.

Citizens Services, Inc. is yet another ACORN front group. However as Sweetness & Light observes:

"ACORN is active in experimenting with methods of increasing voter participation in our low and moderate income communities to virtually every election. But in some elections we get to have our cake and eat it too: work on nonpartisan voter registration and GOTV, which also turns out to benefit the candidate we hold dear [Obama]."

ACORN defines Barack Obama, as a man and a politician. In his own words:

I've been fighting alongside ACORN on issues you care about my entire career (emphasis added). Even before I was an elected official, when I ran Project Vote voter registration drive in Illinois, ACORN was smack dab in the middle of it, and we appreciate your work. - Barack Obama, Speech to ACORN, November 2007.

Barack Obama lies about his ties to Bill Ayers, Jeremiah Wright and ACORN. He has not been asked by the mass media to explain his many other radical affiliations. He should be thankful for that. If the voters of this country knew this man's true agenda, he would still be community organizing in Chicago. As it stands, these lies alone irrefutably demonstrate Barack Obama's glaring unfitness for the important job he seeks.
|