Warning: mysqli_free_result() expects parameter 1 to be mysqli_result, bool given in /var/www/html/americanthinker/admin/common/functions/func.general.php on line 126
 Obama, Oprah, and the Guru: Malignant Narcissism - American Thinker
|

By Robert Bowie Johnson, Jr.
Grandiosity, more than anything else, is what characterizes Obama's character and campaign. Grandiosity is also, more than anything else, what characterizes narcissism, and Obama's narcissism has become obvious to many.
Tony Blankley refers to Obama's posturing as the "height of hubris." Jeffrey Kuhner writes that Obama "is a self-absorbed narcissist who portrays himself as a political messiah -- the anointed one." David Limbaugh writes of the "unspeakably presumptuous extravaganzas as those [that] feted Mr. Obama at Berlin and Invesco Field." 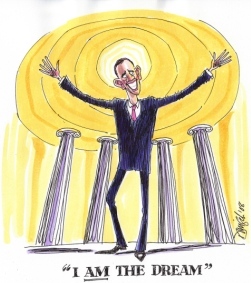 In reference to Obama's narcissism, Charles Krauthammer asks, "[H]as there ever been a presidential nominee with a wider gap between his estimation of himself and the sum total of his lifetime achievements?" Sam Vaknin, Ph.D., author of Malignant Self Love: Narcissism Revisited, writes that "Barack Obama appears to be a narcissist," and offers a detailed explanation.
Obama's entire campaign is nothing more than a demand to be recognized as superior without commensurate accomplishments. For individual instances of the undistinguished senator's grandiosity, please see Barack Obama Audacity Watch.
Two other very reliable witnesses to Obama's narcissism are Oprah Winfrey and her guru, Eckhart Tolle, both themselves pathological narcissists. Delusions of grandeur interpersonally connect Obama, Oprah, and her guru. All three believe they can, even that that they must, change the world for the better, and that means garnering for themselves more and more adulation, what the psychologists call "narcissistic supply."
The public record shows this: First, within the minds of Barack and Michelle Obama resides the grandiose, even megalomaniacal notion that they have the power to make the world as-it-is into the world-as-it-should be. Second, the Obamas look to talk-show host, Oprah Winfrey, as their "global role model" to effect this change. Third, as the Obamas' model for change, Oprah relentlessly promotes the grandiose New Age religion of her guru, Eckhart Tolle.
A closer look at these three narcissists and their widely-ignored interconnections is in order
The Malignant Narcissism of Oprah's Guru
Oprah's guru Eckhart Tolle is a troubled and troubling individual. He claims to have experienced "a reincarnation as a spiritual teacher" through a self-admitted psychotic episode. He is a case study in the development of the mental illness of malignant narcissism. Like the original Narcissus, Tolle is obsessed with the two-dimensional reflection of himself. In his The Power of Now, Tolle writes about what he learns from viewing his own image in a mirror:

Here, in a nutshell, Tolle expresses the fundamental delusion and extreme grandiosity of his own malignant narcissism. Tolle actually believes that he has become the greatest living spiritual teacher by overcoming "egoic delusion." But a mirror image is not true, but backwards. Tolle is not the greatest spiritual teacher in the world as he imagines, but one of the least competent. Such an enormous gap between presumption and reality is characteristic of malignant narcissism.
After Tolle made friends with his backwards image, his New Age doctrine began to jell, and as we might expect, it stands in stark contrast to the Judeo-Christian tradition. The God of the Old Testament is a mere projection of the human mind. Jesus is not the Son of God, but rather a "rare" human being. "The unconscious majority of the population" must "awaken" (to Tolle's teaching and greatness) and either "evolve or die." The Scriptures are only valid when interpreted by Tolle himself. That belief of his approaches the very ultimate in grandiose imaginings.

Beyond his backwards reflected image, Oprah's guru relies on something even more disturbing to change the world. It is a spirit or a force Tolle calls the "Source" which he claims resides within himself and Oprah, and within all those others who have learned through his teachings to "dissolve" their egos. That "Source" has told Tolle that the word of the God of the Bible is not reliable, that there is no death, and that he and Oprah both are as God, able to say of themselves "I Am That I Am." These things that the "Source" has told Oprah and Tolle are the exact same things the serpent told Eve in the ancient garden (Genesis 3:1-4, New International Version).
"I Am that I Am" is the Self-authenticating affirmation from God to Moses out of the burning bush (Exodus 3:13-15). In Hebrew, this is YHVH, or Yahweh, the sacred name of God that is "to be remembered throughout all generations" (Exodus 3:15). Tolle's appropriation of this Name to himself is the very ultimate in grandiose imaginings.
Oprah's Malignant Narcissism
Oprah welcomes Tolle's preposterous claims with uncritical glee because they justify the adoration of her own backwards and exalted mirror image on her altar of self-worship. That Oprah is self-obsessed should be obvious. Her image has appeared on every cover of her monthly magazine since it was founded eight years ago. She prays to herself, asking how she can be used "to serve the greater calling that is my life?" She gives thanks for "the life that I have created now."  Her giving is always a public production, ultimately about herself and the "good" she is doing. Even when she says she doesn't want to make it about her, it's about her.