Most conservative political commentators tiptoe around the unpatriotic positions maintained by many liberals in America. We hear prominent conservatives say things like this, "I am not challenging Mr. Liberal's patriotism. I am challenging his point of view."

The fact is that much of the new left is unpatriotic. And that is okay. The Founding Fathers knew that not all Americans would be patriots; in fact, they counted on it. In this article I will show why the culture of the left is not patriotic. My basic contention is that patriotism is now the responsibility of the right -- abandoned by the left. I will use stories and photographs from this year's Oregon Country Fair to help make the point.
The Oregon Country Fair is held every July on a large private plot of land about fifteen miles west of Eugene, Oregon. Nearly 50,000 people attend the three-day event. The fair is a celebration of environmentalism and left-wing politics.
When I drove onto the fairgrounds, I noticed that the six or seven parking lots were jammed with thousands of good old American gas guzzling SUVs. My wife and I tried to find a hybrid vehicle in our parking lot. We walked passed hundreds of cars and spotted only two hybrids. Nevertheless, the very first exhibit at the fair was this: 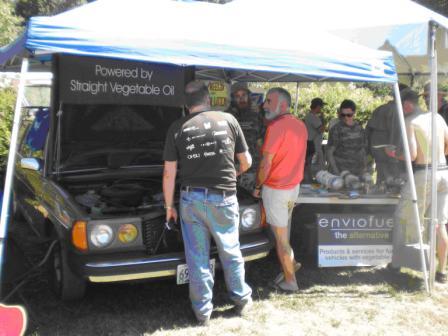 I could almost taste the deep fried hypocrisy.
One of the first things I observed was the absence of the American flag at the fair. As you can see, there are plenty of flags at the fair's entrance. Not one of them is the Stars and Stripes. 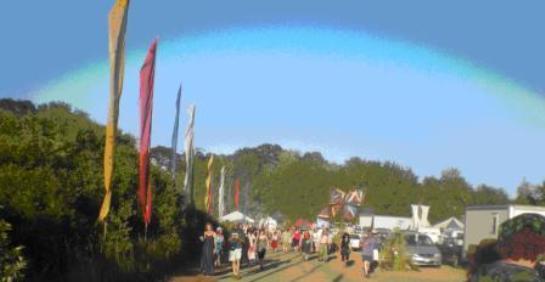 I walked around the nearly 300-acre site for two days and did not see one properly presented American flag. I did spot this "flag." It is the backdrop for the main stage of the fair.

My interpretation of this "work of art" is that the Stars and Stripes is consumed by a giant yin-yang ball of flame and is, in the process, transformed into a cloudy sky.
America was openly mocked and criticized at the Oregon Country Fair. Posted prominently in one of the clearings is the fair's "Pledge of Allegiance." 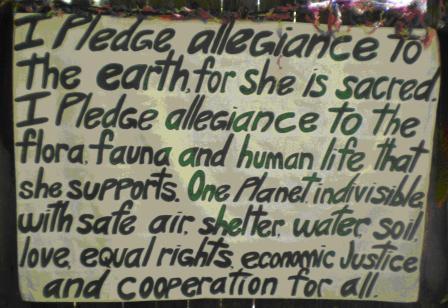 Over forty guest speakers were invited to this year's fair. Some of them were highly critical of the U.S. None of them advertised themselves as pro-American. Here are sketches (taken directly from the official "Spoken Word Schedule") of some of the speakers' topics and backgrounds:

And so on.
I listened to a few of these speakers. One young man, who fancied himself a poet, said in his speech,

America is in
A constant state of war.
It keeps the rich, rich --
And it keeps the poor, poor.

He then looked sternly at the audience of one hundred or so people in the small amphitheatre and claimed,

"I could be tasered and beaten and thrown in jail for saying this."

But instead of a tasering, a beating, or spending a few days in county, the young poet received a standing ovation.
The Oregon Country Fair is an excellent example of the culture of the left in today's America. This is not a culture that favors middle-class capitalism or the traditional form of American patriotism. It is a culture seeking a one-world government, a primitive socialist economic system, a low-tech manufacturing infrastructure, and a religion that worships nature instead of God.
One of the workers at the fair summed up this position with the slogans on his clothing:[i] 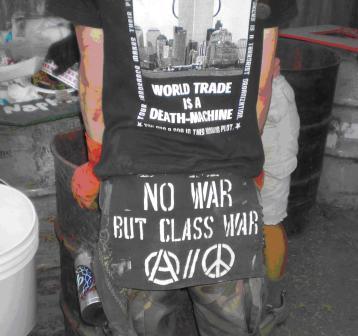 My initial reaction to the fair was bemused outrage at the hypocrisy and self-deception. It was unsettling to witness thousands of my fellow citizens denigrate the country that I love and respect. It was frightening to listen to their descriptions of the society that they would have take America's place.
But I thought about it again. Our most cherished freedom is the one that allows us, any of us, to try and make the country the way that we think it should be. It follows that part of the greatness of America is the freedom of its citizens to believe and to advance bad ideas -- even to promote ideas that would (and are) ending America as we know it.
The diversity in the faculties of men, from which the rights of property originate, is not less an insuperable obstacle to a uniformity of interests. The protection of these faculties is the first object of government.[ii]
The Founding Fathers were well aware of the nearly paradoxical freedom that was being granted to the citizens of our new republic. Their solution was to balance the various political factions against each other, to make the proponents of these rival ideologies compete for control of a limited central government. The founders realized that some people wanted a much more powerful federal government -- and that some people favored little or no central control.
The regulation of these various and interfering interests forms the principle task of modern legislation, and involves the spirit of party and faction in the necessary and ordinary operation of the government.[iii]
In a free representative republic like America "the causes of faction cannot be removed, and that relief is only to be sought in the means of controlling its effects."[iv]
The Founders left the job of preserving this delicate balance of opposing factions to the sincere friends of the republic -- to the patriots.
In a free government the security for the civil rights must be the same as that for religious rights. It consists in the one case in the multiplicity of interests, and in the other in the multiplicity of sects. This view of the subject must particularly recommend a proper federal system to all the sincere and considerate friends of republican government.[v]
I realized, after my trip to the Oregon Country Fair, that it is our job, as conservatives, to preserve this system that allows the various political factions to compete for power. I now understand that this is a two-fold burden for conservatives. First, it is our obligation, as conservatives and as the champions of individual freedom, to allow the left to pursue its utopian socialist vision. Second, it is our duty, as patriotic Americans, to stop them from achieving their goal.
America is a market place of ideas. All Americans are free to enter almost any idea into this market.[vi] As conservatives, we must defend the right to the free and open expression of ideas in order to protect our own freedom of expression and we must protect the freedom of expression of those with whom we disagree. Because the far left no longer supports a limited federal republic (as we have seen, some are opposed to the very idea of a nation-state), this task has fallen to those of us on the right.
The right must protect and defend our representative republic because the left will not. Conservatives are "the sincere and considerate friends of republican government." We are the patriots. It is time we started acting like it -- and saying it.
Larrey Anderson is a philosopher and writer living in Idaho.  He can be reached at ldandersonbooks.com
[i] No War But The Class War (NWBTCW) is a communist front organization that started in London and now has roots in the San Francisco Bay area. No War But Class War (NWBCW) is based in Boston.
[ii] The Federalist, Number 10.
[iii] Ibid.
[iv] Ibid. Emphasis in original.
[v] The Federalist, Number 52. Emphasis mine.
[vi] An explicit demand for the violent overthrow of the government is one of the very few prohibited exceptions.
|