Warning: mysqli_free_result() expects parameter 1 to be mysqli_result, bool given in /var/www/html/americanthinker/admin/common/functions/func.general.php on line 126
 Show me where Stalin is buried and I'll show you a Communist Plot - American Thinker
|

By Michael Geer, with Oleg Atbashian

There's this guy.
He's funny. Wow, is he funny, yet his humor is serious. That's talent, my friend, to actually be funny, with a compelling purpose. Meet Oleg Atbashian, a former agitprop artist from the Soviet Union. The posters, the banners, the slogans. He's one of the many people who created the Soviet Union's symbols and political sloganeering, all that Workers Paradise stuff we hated, the kind of cliched posters Barack Obama's campaign is producing. It's true the

left relies on symbolism over substance. They have to. It's all they have. Symbols, speeches, posters, politically correct language and harangues.
In other words, the Nanny State. A corrupt self-enriching Nanny State.
If you've ever wondered why the left constantly mocks the good and the decent, it's because they're angry contrarians. They say goodbye when they mean hello. They s 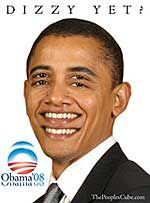 ay love when they mean lust. They're cynical, angry, with issues galore. They think they're important, they think they're funny. They imagine their BushChimpHitler is funny, but in the end Sacha Giutry is right; you can pretend to be serious, but can't pretend to be witty. The left is so tedious because they're the opposite of witty and the machine surrounding Obama is the zenith of not-witty. The late Bernie Mac made a joke about the Chosen One. That's all I'm going to say.
Oleg Atbashian migrated to the United States from the old Soviet Union having lived in the Ukraine and Siberia. His Wikipedia entry states ,

" .. When he arrived in the U.S., Atbashian was puzzled by the "level of delusional affection for all things Left among the liberal intellectual elites who take America's exclusive well-being for granted. At the time Oleg dismissed this "delusional affection" as silly and of little consequence." 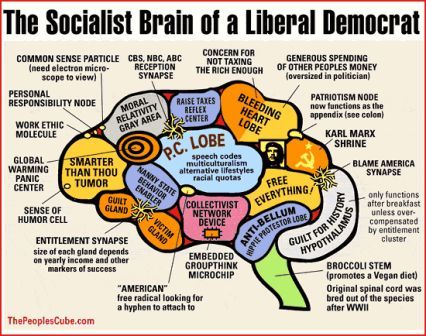 Oleg was steeped in Party, but never a Party member. He worked with the Party Organizer, formerly known as Political Commissar. Commissar kept watch on political correctness. Because of his background Atbashian is the perfect code breaker to decipher the nonsense that is the left, the Democrats and especially Obama. Think of the phrase "been there, done that." Oleg has seen all of it since childhood, waded in it and got out. Oleg helped create these feelings and imagery. If anyone knows what he's talking about when it comes to Obama, it's Oleg.
I spoke with Atbashian by telephone, and his work for the Party ought to send a chill up your 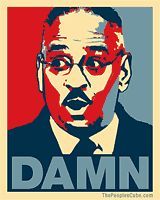 spine. He said he immediately recognized Obama's work with ACORN, where Barack was a 'community organizer'. From the description of Obama's ACRORN job Oleg snorted and said, "For all intents and purposes that's the same job as a Party Organizer."
He said there were three top people in any organization; what we would think of as a Director. The Party Organizer, what we think of as Commissar, and the Union Chairman. Union bosses were mostly concerned with social situations involving workers. Working for the Party Organizer, Oleg created posters, banners, art work and slogans the Party deemed necessary to pump up the volume. Party enthusiasm, Party loyalty, Party heroism, the struggle for all things the Party urged on its workers. The very term 'worker' our media so freely uses today was the backbone of Soviet agitprop.
"Everything was always a war. A struggle. A battle," Oleg said. "The battle for wheat! The war for productivity! Everywhere it was the language of heroes. Heroes overcoming, heroes for the Party, heroes of the people!" 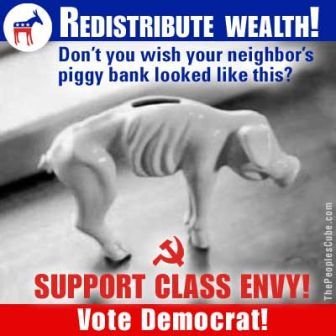 We took note in our conversation that this language has crept into nearly all political and PR utterances in America. Cable networks in particular label weather phenomenon as The Battle for Des Moines! Crisis in the Heartland! The term hero is applied to everything from crossing guards to anyone in the military. It's heroes and battles all the time. Watch the language of the media carefully and see if you don't detect it. The battle for this, a politician goes to war for such and such. A Senator speaks of how hard he had to fight. And on and on it goes. Naked plagiarism of Soviet era propaganda.
"Be very concerned when the term 'toil' begins to show up in mainstream media and in the way culturalists and academics speak," he said. "Soviet workers always toiled. Toil is a very potent word-weapon in the left's vocabulary arsenal."
Oleg says of crisis political manipulation,

"Crisis is the condition that validates and sustains the leftist collectivist moral code. The left needs crisis and disasters to survive and continue the orthodoxy. Therefore, where is the left, will always be crisis. Artificially created if need be, and victims written off as collateral damage in struggle for 'greater good'. Examples of artificial crises in America are the results of 'heroic struggle' by 'progressive politicians': energy, housing, immigration, outsourcing... Crises can also be entirely imaginary: ozone holes, man-made global warming, overpopulation, exhaustion of resources -- and on the political front it's Bush's 'dictatorship', 'erosion of liberties in America', 'illegal wiretapping',' torture', 'imperialist invasions of other countries', and 'controlled explosion of the World Trade Center'."

It's the language of agitprop. The constant crisis. Visual agitation and spoken agitation. And it's not by accident. And this process requires the cult of personality. Oleg spoke of the unending surreal panorama of Brezhnev. On posters, walls, busts, statuary, you name it. Call to mind Saddam, Chavez, Lenin, Mao and you know what he means. Wherever you went, the Party and its Cult Figure were ever-present. Those creating Obama's posters and symbols apparently studied Soviet agitprop. They're aching to saturate America with Obama's likeness, and that's right out of the playbook of symbolism over substance, or, the necessary cult of personality since the left is devoid of substance.

Curiously, and I should have known this instinctually, Oleg spoke about sycophants, too-eager campaign staff and over the top yes-men and seekers.
"We lived through all that in Soviet Union. There are derogatory names to call them, but brown-noser is the most polite. Ingratiating themselves with the chosen cult figure, they hope to rise within the Party structure and hold important positions of power. It is power they crave, the authority to tell you how to live, and recognizing a cult figure, they believe they can weasel their way into power."
"Despite not being qualified?"
"The chosen cult figure rarely has credentials other than a staggering sense of self entitlement and a powerful sense of destiny. His followers are the same. They recognize one another instinctually."
Oleg's latest foray BestObamaFacts  follows on the heels of the wildly successful

CommunistsForKerry  and ongoing hilarious ThePeoplesCube. You have to see The Cube for yourself, No description is adequate. It's a scream.
The Cube is a participatory web site. Wikipedia - Anyone can contribute. People post their comments, come up with characters, and some eventually start their own columns. Which is how the KG3 came into being. Professional graphic artists, they're as riled up and disgusted by the Marxist coloratura of the Democratic Party as Oleg and after so many postings and characters and artwork delivered onto the The Cube, the three formalized their relationships and debuted the KG3. And they are funny. Really funny. While delivering broadsides as serious as a heart attack.
As we chatted, Oleg said something that struck me as so revelatory, so upside down, inside out and so obvious I was ashamed I'd not previously seen through another of that tired political hackery that dominates our national media. He said, simply, "America is progressive." 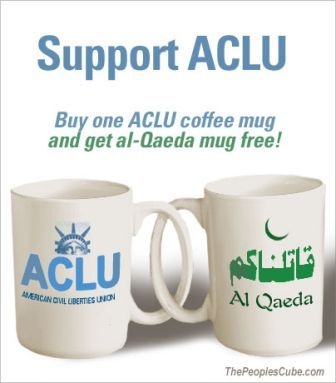 "Excuse me?" I had a sudden twinge our conversation was going off the rails. America progressive? Good Lord.
"Yes. It is America who is progressive. The Left is regressive. America is different than all other nations. America is progress for mankind. The Left and all like them are regressive. Naturally, they have stolen the word and applied it to themselves. This is how agitprop and symbolism work. Is why People's Cube makes you laugh."
He's a hundred percent on the money. America is progressive. We're the progress of mankind. Employing turn-speak, the left has stolen our reality and labeled themselves and their failures with the glory and light of America. We're the real progressives, not them.
He went on the compare the bad old days of the Soviet Union to the current Democratic Party. 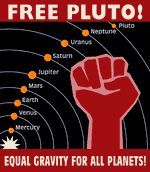 The left is not funny. They are humorless crashing bores who perpetrate the Nanny State. Oleg Atbashian is an interpreter of their snooty attitude and wicked ways. A regular guy with a family and a job and not enough time just like the rest of us, yet he manages to cannonade political zingers at a blistering pace. His output is amazing, but then 9/11 had a profound impact on him. From Wikipedia:

"I'm still haunted by the horror I came to be a witness of," says Atbashian. "The subsequent blame-America attitude among the intellectual trend-setters enraged me; 'liberalism' no longer seemed laughable. It was dangerous suicidal madness that had to be confronted. I took up political activism."

And wields sarcasm as only a former Soviet era propagandist could. Under his stare, the Dems are as naked as the emperor with no clothes. Atbashian is mocking them every step. Because if it makes you laugh, it's got a kernel of truth.
Oh, and don't forego the pleasure of shopping CheMart, a collaborative effort with Brian 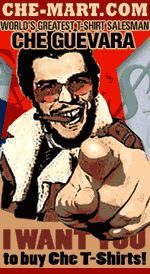 McCarthy, the guy with the light bulb aha! for Communists for Kerry. Chemart lampoons the world's greatest t-shirt salesman!, and so much more.
Atbashian said of capitalism,

"Is self sustaining and self correcting. The left, whether Democrats here or old Soviet Union deeply believe commerce must be managed, but what they create is a system for themselves. They can't help but create an economy to benefit themselves. If the left gets control of economy it will be managed and re-engineered to be corrupt. Is antithesis of capitalism. The necessary condition and by-product of capitalism is freedom. Is designed for people to take care of themselves. Regressive economic thinking is patterned to subvert freedom, so corrupt enrich themselves at your expense. You work and they grow fat. Capitalism is other way around. You work, you grow fat."

What a pleasure to speak with him. A lens that sees clearly because he's toiled on the other side. Literally. And in Obama, the fascination with Obama and all that's happening around Obama Oleg recognizes the footprints and signals of the thing in the Soviet Union he escaped.
But instead of despair Oleg's activism trotted out sarcasm and real humor. With devastating effect. Political ignorance births despair and despair births rampant cynicism, what the left calls funny. Oleg lived through that fire and came out witty and sarcastic with purpose. To stand on the corner and shout, "Hey, the emperor is naked!" and makes us laugh doing it. What a guy!
I asked Oleg for a quote, how he feels about America.

"I think you already stated that when you quoted me saying 'America is progress for mankind'. To answer your question I'd have to write a book, and maybe some day I will."

He finished with "I've been at the last stop of the bus the Left wants all of you to take. And I'm telling you people: it's not worth it."
Michael Geer is a rancher and, author.
|