Warning: mysqli_free_result() expects parameter 1 to be mysqli_result, bool given in /var/www/html/americanthinker/admin/common/functions/func.general.php on line 126
 Obama Lacks an Economic Narrative - American Thinker
|

By Christopher Chantrill
The good friends of Sen. Barack Obama (D-IL) at The New York Times Magazine have written a long thumb-sucker about Obama's proposed economic policy.  What will "Obamanomics" look like, they wonder?
"In some fundamental ways, the American economy has stopped working," writes David Leonhardt, and most families are no better off than they were in 2000.  Yet, Leonhardt worries, Sen. Obama doesn't seem to have a compelling story to tell Americans what he would do about it.  When Leonhardt asked Obama about his economic approach:

He started to answer, but then interrupted himself. "My core economic theory is pragmatism," he said, "figuring out what works."

And that doesn't seem to have much to do with hope and change.
Back in 1993, we learn, when Bill Clinton decided on his economic strategy, it was a contest between Bob Rubin's "lower the deficit" strategy and Bob Reich's "investment" strategy.  Today, Leonhardt reckons, there's a kind of Democratic consensus, because Democrats think that both Bobs are, "in part, correct."  Policy experts agree that Clinton's "deficit reduction did an enormous amount of good."  But today, because of the stagnation in the income of the bottom 60 percent since 2000, we need to "begin to address inequality" and to plan Reich-like investments in "alternative energy, physical infrastructure, and such."
But let's look at the numbers.  Maybe the reason that "deficit reduction" did so well in the 1990s is suggested by this chart, courtesy of usgovernmentspending.com.  It wasn't so much shrinking the deficit that made a difference.  It was growing government slower than the economy. 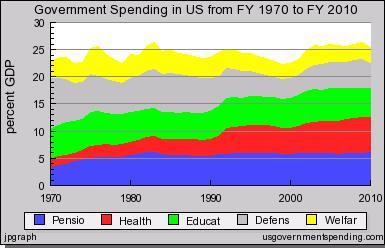 The chart shows the cost of the five biggest government programs in the United States as percent of GDP since 1970.  The government share of the economy went down in the 1990s.  The government share went up in the 2000s.  Notice that the program that has increased the most is government health care.  Notice that the program that has decreased the most is national defense.
But what really is the cause of the slowdown in income growth?  Leonhardt mentions the following:

[N]ew technologies that have made some blue-collar work obsolete; a slowing in the nation's educational attainment; the shriveling of labor unions; the increase in one-parent families, which are far less economically secure; and the rise of other countries that have huge low-wage work forces.
What Obama blamed the current administration for, he said, was aggravating these trends with the tax code.

Notice something?  The problems that Leonhardt identifies are all unintended consequences of government programs.  They include monopoly privileges for labor unions, monopoly government education, father substitution with welfare, attack on low-paid workers with illegal immigration.
To address these problems Obama proposes a comprehensive and mandatory program to reverse the Bush tax cuts and More.  As everyone knows, the rich have benefited unfairly from the Bush tax cuts, so Obama is going to sluice a bit more money at the lower half of the income scale with taxes on the rich and rebates on FICA tax for lower-income workers.
Of course, if you look at the numbers on federal income tax and FICA tax, available from our friends at usgovernmentrevenue.com, you notice that FICA tax, as a percent of GDP, has been in a slow decline since 2000, and income tax collections (i.e. on the rich) have bounced up smartly since the 2000-2002 meltdown.  Rather than change the tax code Obama proposes merely to intensify trends already in progress, increasing income tax collections and reducing FICA tax collections. 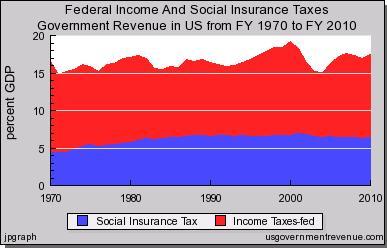 His agenda calls for about $50 billion in new annual spending on various investments, including infrastructure, alternative energy and scientific research.

Waiting in the wings, as well, is a massive cap-and-trade bill to cap emissions of greenhouse-gas emissions.
When Ronald Reagan ran for the presidency, he articulated a clear message of lower taxes and less government.  Nobody could doubt that he intended to climb onto the bridge of state and order a course change.  But reading through Leonhardt's appreciation of the Obama strategy, you get the feeling that the Obamanians have no clear idea of where they want to go.  They just want to get onto the bridge at the next watch change, and then they'll sit down and think about what to do.
Maybe we are missing something.  Maybe the Great Orator will electrify us with an acceptance speech for the ages that really puts substance on his gauzy vision of hope and change.
Either way, writes Leonhardt, there are "two enormous challenges... waiting for the next president:" global warming and income stagnation.
Or maybe not.  Maybe the "two enormous challenges" are just waiting around for a president with the guts to do something about gas prices and limit the growth of government.
Christopher Chantrill is a frequent contributor to American Thinker. See his roadtothemiddleclass.com and usgovernmentspending.com.  His Road to the Middle Class is forthcoming.
|