Warning: mysqli_free_result() expects parameter 1 to be mysqli_result, bool given in /var/www/html/americanthinker/admin/common/functions/func.general.php on line 126
 Experience is More Than a Punched Amtrak Ticket - American Thinker
|

Experience is More Than a Punched Amtrak Ticket

Critics from both political parties having doubts about Sarah Palin have seized upon her limited experience. But what kind of experience are they talking about? Normally level headed pundits like Mort Kondracke and former Clintonites like Dee Dee Myers both seriously believe the experience that matters is time-in-grade accompanied by appearances on Meet-the-Press and face-offs with the Washington DC press corps.

And the Obama campaign asserts with a straight face that Joe Biden's experience,  nearly 40 years of Amtrak round trip ticket punching from Union Station to Wilmington, Delaware  is of vice presidential grade, if not fully Oval Office timbre itself. 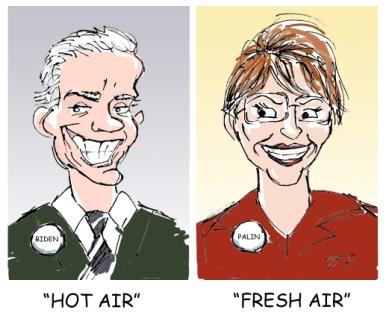 Fortunately John McCain knows experience that matters means achieving something noteworthy, if not remarkable, requiring fearless leadership in execution. Traditionally a leader has been defined as someone who could harness the energy of people around him or her in order to do something monumental, undertaking considerable risk, where the outcome was uncertain: for example launch a new company, eradicate a disease, build a canal or a railroad, lead an expedition to and from Antarctica, land a man on the moon and return him safely to earth, win a battle or a war, or found a new nation.
Instead leaders today are defined by the Beltway gang as anyone eloquent in mastering the teleprompter, delivering the 30 second elevator speech and commanding the best talk show sound bite. Which perfectly describes Barack Obama but is wholly inadequate, unworthy, and out of touch with mainstream Americans in defining Sarah Palin.
Barack Obama on occasion delivers a captivating speech. Not much content but it sure sounds special.  A single speech on behalf of John Kerry in 2004 propelled Obama to the only noteworthy accomplishment in his entire life-seizing the Democrat party presidential nomination in 2008. Of course this dubious milestone is more attributable to the gullibility of Democrats and their guilt ridden endorsement of Obama's racial identity politics rather than any substantive claims by "the One". Otherwise he has done nothing special; in fact absolutely nothing to get where he is let alone deserve the White House.
At least Joe Biden has won reelection to the US Senate, albeit for the smallest most lackluster state in the Union, and to be blunt, first in a pig's race. But for 40 years Joe Biden hasn't accomplished much more than Obama, except gain tenure. But he's been on Meet-the-Press and has miles of C-Span videotape under his belt. I suppose browbeating four star generals and insulting Republican Supreme Court nominees passes for heroism these days.
Now contrast this empty set of resumes with Sarah Palin. In less than two years, in a frontier rodeo which is Alaska politics, she already has a documented trail of stunning achievements. She has forced the reevaluation of oil and gas property,  provoked more oil and gas output while spearheading a $40 billion pipeline construction, penned over 300 vetoes to kill pork barrel spending all while ousting corrupt careerist Alaskan politicians from her own party.
In 18 months she has put dollars back into taxpayers' pockets, rejuvenated the petro jobs economy of Alaska, is showing the way for this nation to achieve energy independence and has produced the first genuine reform government since Teddy Roosevelt in New York State. In 18 months, apart from gaining pop stardom, what has Barack Obama done?
John Quincy Adams perhaps had the best resume ever to be president. Yet, his single term initiatives were sidetracked by political intrigue and bitter infighting, where Andrew Jackson prevailed, denying Adams a second term. None of the statesman-diplomat skills acquired as an apprentice to his father,  later reinforced by appointments as president Madison's ambassador to Russia and Great Britain and as president Monroe's secretary of state, could save him.
Harry Truman, certainly one of, if not the most unlikely of men to occupy the White House, as vice president wasn't even close enough to be in FDR's shadow. Yet Truman attained greatness with four momentous decisions-Hiroshima, the Marshall Plan, the Truman Doctrine for Soviet containment and the Berlin airlift. And let's not forget desegregating the military.
Does Sarah Palin have enough experience that matters to be vice president?  Well despite it being a work-in-progress, her experience is more than either of the candidates across the aisle. More important it's the kind of experience that matters to regular Joes and Marys everywhere but in Washington, DC whose punditry in residence will never comprehend.
|