By Kyle-Anne Shiver
Happy Independence Day, dear readers!  Now, you might want to take a short break from waving your flag, put your sparklers on hold and grab a hanky.  This story is going to put a lump in your throat the size of Texas, and bring tears to even the most hardened eyes among us.  And I'm not joshing you.
Operation Gratitude was founded in 2003, by one mother (That's right, just one), Carolyn Blashek.  Carolyn has no children in the military.  She doesn't come from a military family.  She's not particularly political either.  Shortly after 9/11, though, Carolyn got her patriotic calling.
Like many Americans, she wanted desperately to do something.  At first, she even tried to join up and go fight.  Too late; she was already past fighting age.  So, she went with Plan B.  She signed up for pre-deployment morale boosting at the USO lounge at the LA airport.
Enter an American soldier.
He's young, oh-so young.  He's brave, oh-so brave.  He's ready, he thinks, to fight America's battles for all the rest of us.  But there's one thing that worries him, and he opens his heart to this solitary mother.   She may be the last civilian American he sees for a long, long time, perhaps ever.
What is this soldier's greatest fear?  Not being killed in action.  Not being seriously wounded or even maimed.  He doesn't fear the enemy.  He doesn't fear the stifling heat, the torrential sandstorms, nor fighting for his life in heavy body armor.  No, this young soldier fears that he won't be remembered because there is no one who cares enough about him to remember that he lived and breathed, and was a unique human being.
He has no family, you see.  He's alone in this world and he's about to embark on what may be his very last journey.  There's no fanfare.  There are no parades, no fireworks, no waving flags, nor even a mom or dad or brother or sister to say "good-bye."  There is only this lonely soldier and a mom he doesn't even know.
"I care.  I care, and I'm grateful and I'll always remember you," says the mom.  "Thank you," says the soldier with a hug.  And a moment later, this one goes off to war, perhaps never to come home again.
The very next month Carolyn founded Operation Gratitude in her own living room, collecting goodies, writing letters of support, and mailing her "I-Love-You!" packages to every soldier, whose name she could get.
That one encounter in the airport provided the stimulus for the Country's most consistent, most successful, most far-reaching troop support organization, perhaps in American history.  One unheralded soldier, one dedicated mom, and thousands of volunteers, private and corporate sponsors.  Together, they have been saying, "Thank you!" to our troops in every place where America has men and women in harm's way, for five whole years, with no excuses, no breaks, no vacations, and no paychecks either.
So far, Operation Gratitude has sent over 350,000 packages to individually named soldiers, marines, sailors and airmen.  Day in, day out, our fighting forces are there for us, and right behind them, guarding the home flank, there are the OpGrat forces assembling care packages that say, "We love you!"  "We thank you!"  We care about you!"  "You are not forgotten!"
OpGrat Even Saving Lives
Every time I talk to Carolyn, she tells me another story that sends chills up my spine and often brings tears to my eyes.  This one, though, takes the cake as far as I'm concerned.
It seems that another wonderful American lady, who loves Beanie Babies, convinced Carolyn that these adorable little bean-stuffed critters would make a great addition to OpGrat care packages for the troops.  Since the lady donated a whole lot of them, Carolyn agreed and faithfully included them in packages, not sure what the reactions from grown men and women in a theater of war would be.
Almost immediately, email began arriving, specifically mentioning the Beanie Babies.  Stories were as varied and inventive as the great American ingenuity that inspired them.  Soldiers told of Beanie Baby squad mascots, creative naming projects, competitive games centered upon the latest Beanie Baby, and on an on and on.  Truly, even Carolyn was shocked at the overall success of the Beanie Baby project.  Humorous diversions in hellish circumstances, of course, are as old as war itself, so perhaps we shouldn't be surprised.
But then, startling revelations began to arrive at the OpGrat headquarters, and the Beanie Baby project took on a whole new meaning.  They were actually saving lives and helping to win the war.
Some of our truly exceptional, brilliant soldiers had the idea to trade the Beanie Babies with Iraqi children for information on hidden IED's.  The children, so bereft of toys, gladly showed soldiers where explosives were hidden in exchange for the coveted cuddly critters.
Soldiers saved by a toy, proving once again that God truly works in mysterious ways.  Who could have imagined this?
Returning Soldier Gets Memorial Jeep
In January, I wrote about Operation Gratitude and Carolyn's trip to Iraq, where she and her right-hand man, Charlie Othold (USAF ret), went to personally deliv 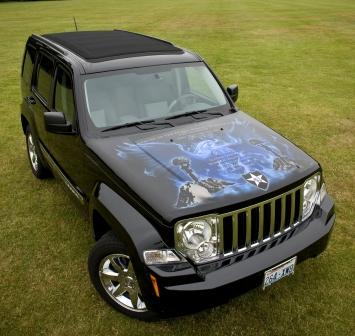 er the 300,000th package.  The real kicker to that package was the fact that the Chrysler folks donated a brand new Jeep (Registered Trademark) Liberty to the recipient, whose name, by the way, was chosen by the computer, and not known in advance to anyone.
SPC Michael "Shaun" Gallagher, who received the keys to his new Jeep (registered trademark) Liberty in Iraq, within the 300,000th OpGrat care package, thankfully just returned with his unit to Fort Lewis, Washington, where he was presented with the actual vehicle this past Tuesday, July 1st.  Not only did this soldier receive the promised Jeep Liberty, he also got a promotion the same day, to Corporal.

And this Jeep (Registered Trademark) Liberty was not just any vehicle.  When SPC Shaun Gallagher received the keys, he told Carolyn that when he returned home, he intended to have a special mural painted on his new wheels, a memorial tribute to the fallen soldiers from his unit.

Cue to readers:  Have those hankies handy.
Our fearless Troop Mom, together with Shaun's terrific family and the folks at Chrysler, had the memorial mural painted before our brave soldier returned home to receive it.  When I saw the picture, I cried a bucketful; I'm crying another right now. Here's what the memorial says: 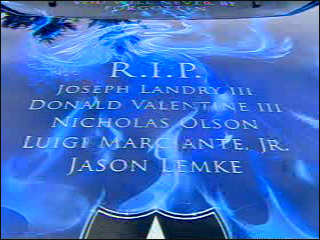 The traditional battlefield memorial of combat boots, rifle and dog tags appears on both sideof the names.  A phoenix, the bird of mythology that rises out of the ashes, is in the background.  The design was Cpl. Gallagher's concept, sketched onto paper by his mother, Karen Gallagher, and permanently memorialized on the vehicle by artist Mike Lavallee of Killer Paint in Snohomish, WA.  The words, "Thank You Operation Gratitude" are painted on the rear bumper.
"I felt this would be a way to honor them for their service. It represents their lives," Gallagher said, choking back tears.  "Now they are all home and always with us," added his mother, Karen, who traveled from her home in California for the Welcome Home Ceremony and Presentation.
Operation Gratitude, We Salute You!
Every day, without fail, I thank God for my freedom, and for every single man and woman who serves to protect it, every veteran of every branch of the service, and every family member whose many sacrifices go unheralded.  And, especially on this 4th of July, our Independence Day 2008, I wave my flag, light those sparklers and cry with joy and thanksgiving for the sacrifice of the millions who've made our liberty possible.
But today, I want to pay a special tribute to America's Troop Mom, Carolyn Blashek, and the thousands of American volunteers, who with their consistent hard work and unsung love, show special fortitude on the home front, "a flank in our war against terrorists, which we cannot allow to go unguarded" (LtCol (ret) Steve Russell).
So, today, Operation Gratitude, this salute's for you!
May God bless you and keep you and make His face to shine upon you and all you do for every American.  We could not make it without you!
If you wish to join me in supporting Operation Gratitude, please visit their website and get involved today.  Every single penny donated is used for packaging and shipping expenses.  Not a single dime goes for advertising, promotion or fundraising activity.  Letters, cards, donations, prayers and the names of soldiers serving in harm's way make you part of the OpGrat team.
Kyle-Anne Shiver is a frequent contributor to American Thinker.  She welcomes your comments at kyleanneshiver.com.
|